One of the two most attractive summits in the Western Tatras, in their western part which Slovak people call the Roháče, Baníkov is the highest summit in the main ridge of the Western Tatras. (Its name derives from a Hungarian/Slovak word for "a mine/miner" - a couple of centuries ago the slopes of Baníkov, like those of other mountains in the area, were prospected for ore.) Its main attraction is the several hundred metres of narrow crest, part of the main ridge of the Western Tatras, running east from the main summit. No, we are not talking of the Alps. But the ridge is fairly airy and in wet or wintry weather conditions the climbing can become pretty dangerous. Such a piece of jagged granite ridge is a rarity in this quarter of the Tatras (even as far as the High Tatras are concerned, such a thing is a rarity in terms of what is legally available, that is to say on the net of the marked trails within the National Park). Here is how Józef Nyka, renowned writer of the Tatra hiker's guidebooks, sees it: "...an interesting crest climb over good rock, with many craggy steps, notches and smooth slabs, generally high exposure." (translation by yatsek) The uppermost section of the mighty side ridge of Ráztoka/Rozsocha (green stripes leading to Žiarska chata, i.e. hut) between Baníkov and Jalovecký Príslop 2,142m which runs from Banikov to the south (photo above)is also fairly narrow and its east face is precipitous. The western face of Baníkov, down which the ridge trail continues towards the westernmost reaches of the Tatras, is the gentle side of the mountain. A descent to Baníkovské sedlo (Baníkov Saddle) at 2,040m takes just over 20 minutes. But mountains, like people, can have more than one face. Many unprepared climbers have been injured or killed on Baníkov, mostly in wintertime, of whom many if not the most were Czech. The Slovaks have a joke: Two non-Czech climbers are walking below a cornice of snow at Baníkov, and one of them says: "Hey, don't utter a word in Czech. It could trigger an avalanche."

Fortunately, border crossing is no problem at all any more but the national park rules are quite strict. In Slovakia, you don't pay an entry fee but you're not allowed to roam the park in winter/spring. Here are the detailed regulations for various fun activities.

The hiker must know that offtrails in Slovakia is tolerated only for mountain-climbing when accompanied by a registered mountain guide, or holding a licence of UIAA club. But not all zones. Natura 2000 zones are strictly forbidden. The north side of Baníkov, with the area of the lakes of Rohačká Dolina is such zone. However, Baníkov is served by many very convenient official trails. 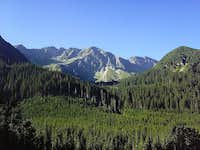 Baníkov can be visited in several ways. Here are 3 loops from different valleys: * Loop via Žiarska Dolina: Reach Žiarska Chata, in which you can spend the night the evening before. Take the green trail climbing west to Jalovecké Sedlo, and follow the ridge to the top of Baníkov. Leave it following east the ridge to Hrubá Koba and Tri Kopy. You can descend to the hut via Smutné Sedlo, or, if you feel like, extend the hike till Plačlivý, returning via Žiarské Sedlo. In this case, the loop might be more appropriate in the opposite direction, as you might spend more time on Plačlivý.

* Loop via Jalovecká Dolina: From the entrace of this valley near Jalovec, follow the yellow trail till Rázcestie do Parichvostou, and the blue to the pass Baníkovské Sedlo. Climb the peak Baníkov and return to the pass, continuing later to Pachoľa, Spálená, until the peak of Salatin. Descend from Salatin back to the valley Jalovecká Dolina, to return to the junction at Rázcestie do Parichvostou. * Loop via Rohačká Dolina : It is also possible to visit Baníkov from the north. Many possibilities of loop are possible from there. At the junction with the yellow trail at Rázcestie na Adamculi, climb until Baníkovské Sedlo. Follow the ridge to Baníkov and leave it via Hrubá Koba and Tri Kopy. At Smutné Sedlo, descend back to the valley Rohačká Dolina. However, if you are quick, it would be a shame not to visit the beautiful lakes Rohačké Pleso. In this case, start the hike with the green trail at Tatliakova Chata, and catch back the yellow descrived above.

There are plenty of options available:

Forecast for the town of Zuberec, at approximately 750m, 10km northwest of Baníkov: