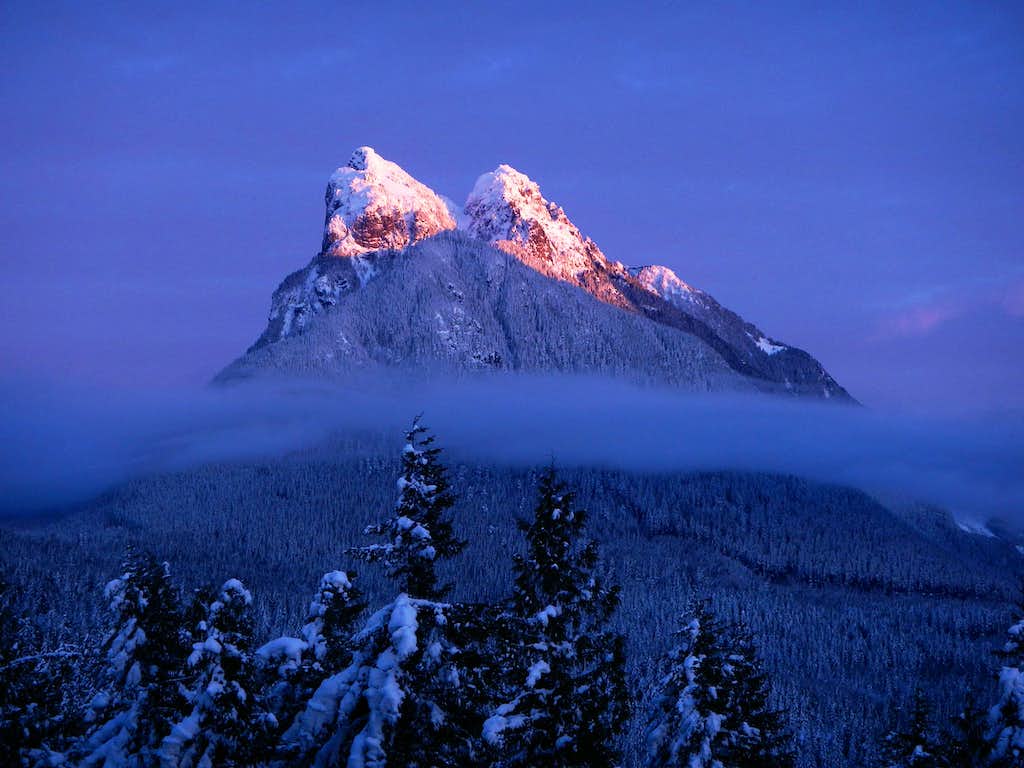 Baring In Winter
Baring Mountain is one of the highest peaks in the Wild Sky Wilderness, but more notably, it is the 3rd steepest peak in Washington State. This is extremely significant considering that Washington has a reputation for rugged peaks with plenty of difficult climbing. The profile of Baring Mountain is highly recognizable from the west with it's double summit and sheer north face. The standard route makes use of a long northwest ridge. The south peak, which is 115 feet lower, is rarely climbed. The first ascent of the main peak was made by Albert H. Sylvester and John Charlton, July 28, 1897. 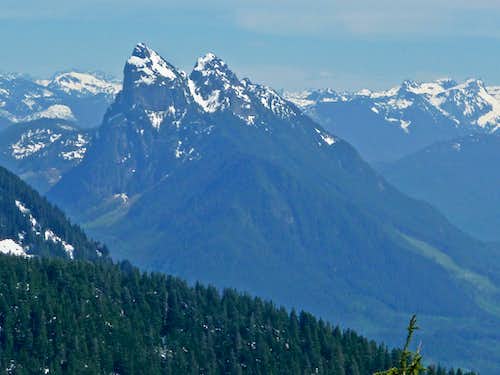 The Double summit Viewed From The Northwest 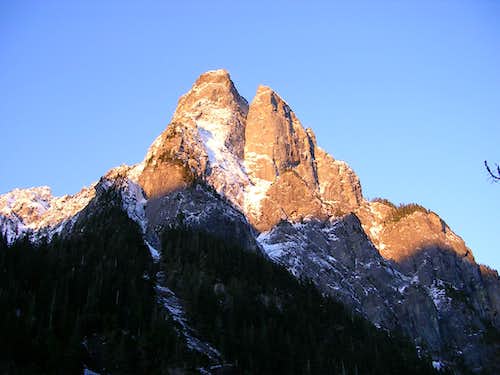 North Faces Of The Main Peak And Dolomite Tower
The dominating north face of Baring is the most dramatic sight in this sector of the Cascades. It`s vertical and overhanging face is readily noticeable as one drives up US Hwy 2 towards Stevens Pass. Even though it is not high by Cascade standards, it`s relief of over 5,000 ft above the Skykomish river gives it a commanding presence. 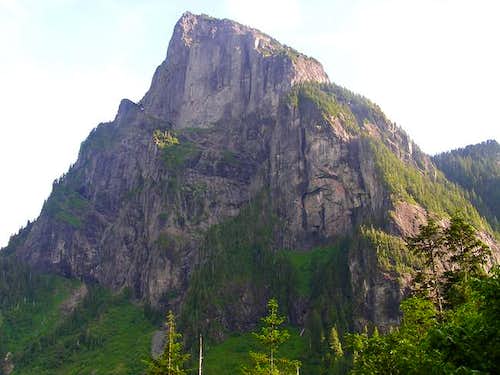 The Big Wall On The North Face 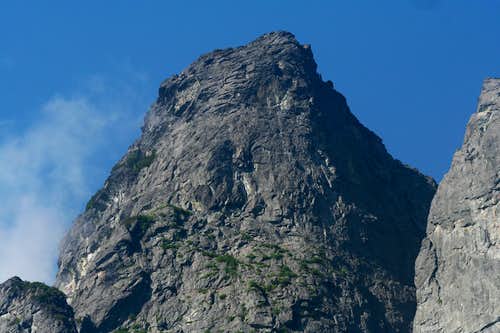 The Upper North Face
The peak has technical big-wall routes which may rival in difficulty with those of Yosemite, but it often goes years without any attempts because of poor rock quality and unpredictable weather. The effort to conquer the imposing north face spanned 10 years and took much effort from several different parties, eventually claiming one life before it was finally completed. The first successful ascent of the north face was completed by Don Gordon and Ed Cooper, July 13, 1961. 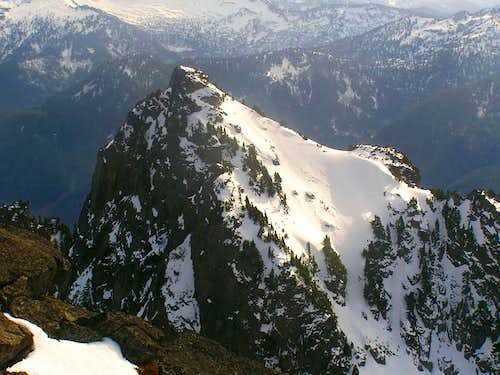 The South Peak Seen From The Main Peak

From the parking area, walk just under a 3rd of a mile along the old road towards Barclay Lake. A rough boot path leaves the road on the south side and ascends steep loose dirt slopes, next to a small creek. The boot path crosses the creek several times but stays near it while ascending directly up the slope. Exercise caution as a fall here could lead to injury (it happened to a friend of mine). Most climbers say this steep slope is the crux of the route. 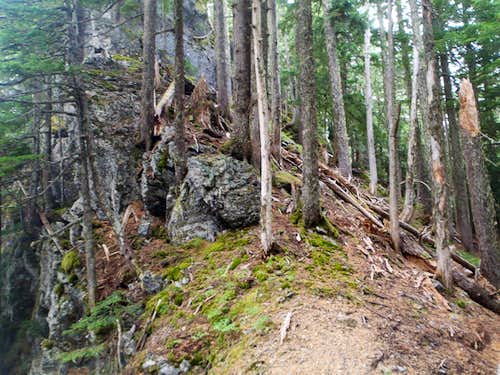 Along The West Ridge
Near the crest of the ridge the path enters a small gully and becomes less defined. There is also a small cliff band which ranges in height from 10 to 20 feet. Some route descriptions make no mention of this cliff band. With substantial snow on the ground, it might be covered up. Slightly west of the gully is feature with an easy class 3 step to the top of the cliff band. It might be marked with flagging tape. 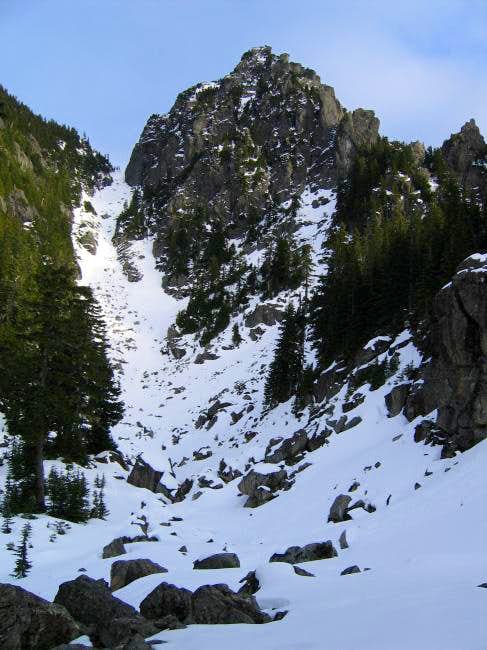 The Gully Allows Access From The Basin To The Notch
Above the cliff, it's not far to the crest of the northwest ridge. Follow the ridge to the southeast for one mile until you encounter cliff bands around 4400 feet. Drop down onto the south slopes only so far as is necessary to traverse under the cliffs. Beyond the cliffs, hike back up to the ridge crest and cross over to the other side, where a large basin is right below the main peak an south peak. 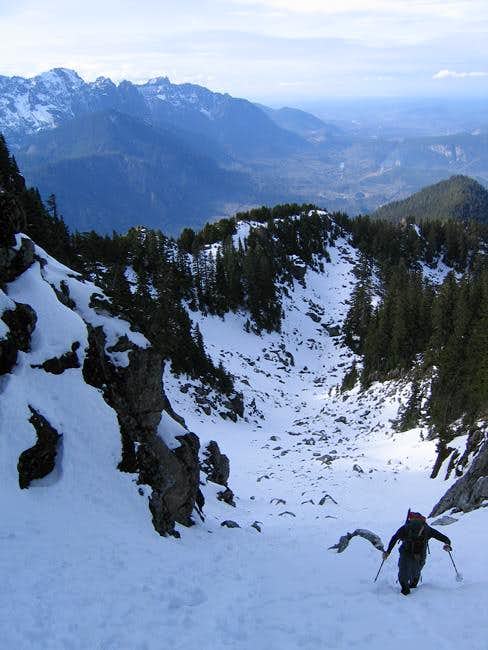 Ascending The Gully
Cross the basin to the east side and ascend the main gully to the notch (5550 feet), between the south peak and main peak. In late summer and fall, the basin and gully will be talus, but the rest of the year it will be a pleasant snow climb. At the notch you will face another obstacle. Some have called it the "vertical snow wall". This feature seems to change depending on the snow fall of the given year. In any case, if you know how to use an ice axe, it should be no problem. 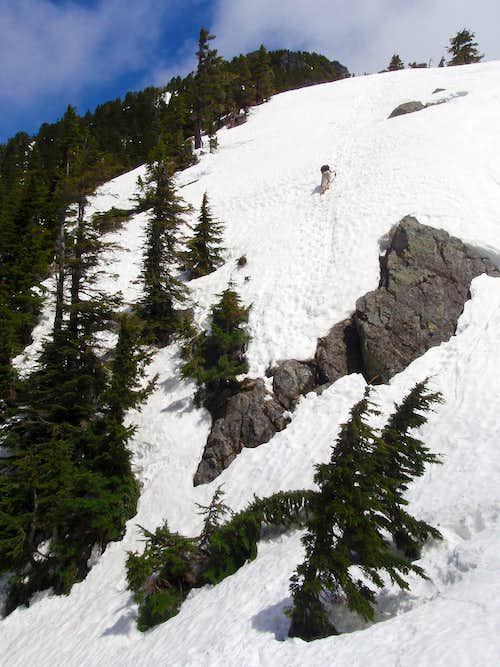 Climbing Out Of The Notch
Above the snow wall, the summit is just another quarter mile away, to the north. There is some easy class 3 scrambling right below the summit. In winter and Spring this will be covered with snow. Beware of cornice danger. See this GPS route map created by SP member Ineher. 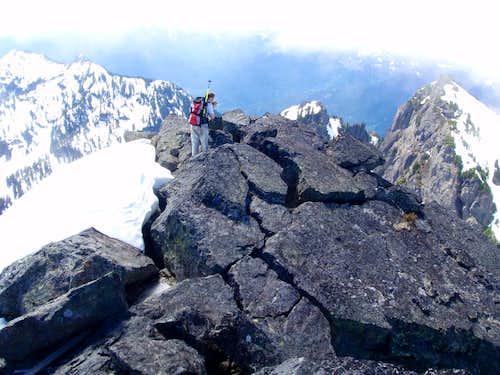 Drive Highway 2 east of Index to the small town of Baring and turn north onto road 6024. Cross the railroad tracks and follow the gravel road 4.5 miles to the trailhead for Barkley lake. Do not take the trail to the lake but instead continue up the abandoned road until a creek crossing and a cairn. Find the climbers path heading up, next to the creek.

The Bolt Creek fire of 2022 burned most of the forest on the mountain. 2 hikers narrowly escaped the blaze. This video shows their ordeal.

BASE jumping is dangerous and often illegal. This page does not encourage such behaviors and takes no responsibility for those who jump. Having said that, Baring is one of the more popular BASE destinations of the Pacific Northwest.


July 22, 2010, A woman died while jumping with her husband when her chute fails to open. Read Article

One week after Bertucchi was killed, Eldon Burrier climbed Mount Baring to make a memorial jump. But things didn't go as planned. Eldon's chute got snagged and he was left dangling high on the north face. He was able to place a call. Subsequently a search and rescue team was deployed. Read Article 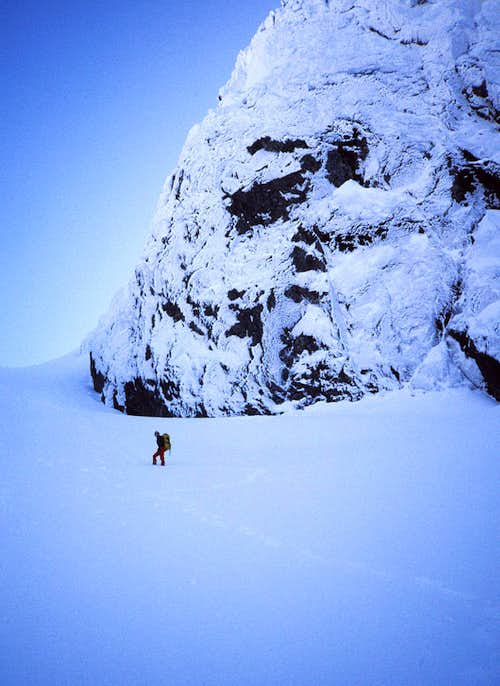 Nearing The Notch, March 1985
Summer is the season of choice although Spring has the advantage of snow covered brush. Also, due to the fact that the TH is at a low elevation it can be reachable when others are still snowed in.

The WSDOT web cam for Stevens Pass can be found here.

Once on the old road grade, the turn-off to the trail is likely a bit more than the 300 yards that's advertised in the guide books. The cairn marking the turn-off wasn't there when we did it but the creek drainage is very obvious on the right -- steep, filled with rocks. There's no need to stay in this creek bed for long. After about only 10-20 feet up, cut out of the creek to the right and look about 20 feet into the forest to pick up a trail heading up the steep slope to the ridge.