The Barker Dam Trail is located near the Lost Horse Valley in Joshua Tree National Park. It is a relatively easy trail but can be incredibly hot in the summer months. The scenery is incredible and the route even offers historic native caves and petroglyphs! Expect to see many types of wild desert flowers in the spring and look (and listen) for the wildlife in the area. The damn itself is a great piece of history as it was created by cattle drivers in the 19th century to provide water supply for their herds. 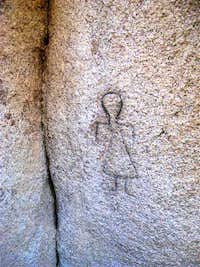 There is no elevation gain in the area although there are many good boulders and rock formation to climb that give you a spectacular view of the wilderness area north of the trail. It is important to note that there are many unmarked trails that lead away from the general area and the main trail itself. I've often wondered if these are old native trails or simply trails made by the wildlife. It is incredibly easy to get lost on these trails as they lead away from where you want to be. It's always a good idea to take note of your relative position to a large rock formation so you'll always know where you are if you do decide to venture off the main trail into the wilderness.

The best time to see the dam is in the spring when the chances of rain are greater. No rain means no water in the damn. Although, its still worth the short trip to see the area. Be sure to note of the water lines on the rocks from past years when the damn has been filled nearly to capacity.

Take Park Blvd. southeast and make a left towards keys ranch. Follow the signs for the Barker Dam Trail. 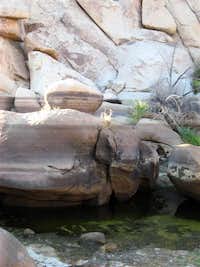 It is a much longer drive through the park if you're coming from the south, heading north/northwest from The 10. If you are, take a right at the signs for keys ranch and follow the signs.

Its a simple route. Start off by heading northward on the trail lined by the wooden fence. When you come to the trail junction take note of where you are. It is at this point that you can go either left or right but the difficulty in recognizing the junction when you complete the loop can and has caused tourists to get trapped in the "bowl" between the low lying rock formations in the area. The shortest way to the dam is to keep headinig northbound by taking the right in the junction. If you take a left at the junction you'll come upon the native petroglyphs before the dam. 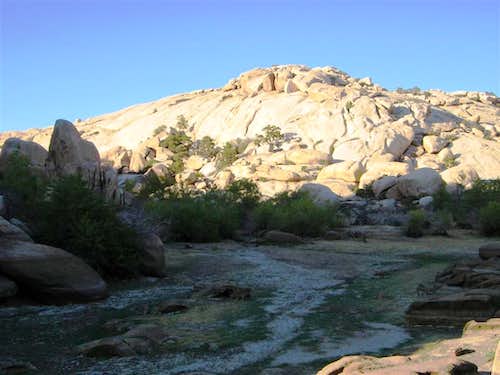 Drained Barker Dam during the Summer

The trail itself is well marked with many informational signs that describe plants, animals and particular types of rocks. You'll know when you're at the petroglyphs or the dam. When coming upon the dam you'll first see an old cattle trough built by the herders. To get to the trough you'll have to climb down some rocks and through some brush. 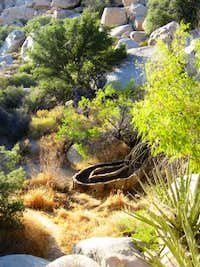 The Cattle Trough at Barker Dam

When you're at the damn, if its not filled, you'll be able to walk around the boulders and rock formations that are usually underwater after rain storms during the spring. 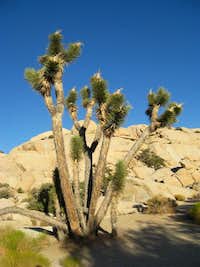 A Joshua Tree at Barker Dam

Bring enough water, as usual, and get a good pair of hiking boots. Hiking in the desert with inadequate footwear is a BAD idea! Trust me, I've seen thorns in feet and its not pretty.

This is a common area for tourists to the park. Because the trail is so short and so easy, often times many people get out of their cars and wander around the area appearing lost. The crowds can get annoying in the spring time!