Gran Canaria, the third largest of the Canary Islands, is well known as a rock climbing destination. Its superb volcanic rock (basalt) is loaded with all imaginable features (cracks, pockets, edges, smears, holds of all types), offering interesting variety even on a single climb.  It is possible to climb all year round, with the best climbing period being from autumn through spring. The island features 14 climbing areas, most of them are located on the north coast and in the center of Gran Canaria. No special permits are required for rock climbing.

The Moya Gorge (Barranco de Moya) is a ravine in the northern part of Gran Canaria. Compared to the more popular climbing venues, such as Fataga, Sorrueda, and Tamadaba, it is less frequented. When we were climbing there in December, 2013, we had almost the whole climbing area to ourselves. The Moya Gorge is a nice quiet place, climbable all year round, as even on hot summer days there are cool places with plenty of shade.

"Gran Canaria: Guia de Escalada Deportiva / Sport climbing guide" issued on 2011 is currently the only guidebook about rock climbing on Gran Canaria, listing over 700 bolted  routes at 14 local crags. It is written in both Spanish and English. The book has brief descriptions of the climbing areas, directions on how to get to the crags, and lots of color topo photos of the routes. However, the descriptions of the routes are very laconic, containing only the names and the grades of the routes. Moreover, the book is already slightly  outdated, as a few descriptions on how to get to the crags are not entirely correct anymore, as we found out hard way. Also, new routes are being established. Nevertheless, this book is an indispensable assistant if you plan to rock climb on Gran Canaria.

Getting There and Where to Stay

There are buses all over the island, and connections are good. If you want to be flexible, consider renting a car. We used Cicar.

Wild camping is officially prohibited anywhere on the island.  Overnight bivouacs are at your own risk, use the common sense and keep a very low profile. And, of course, do not leave any trace. 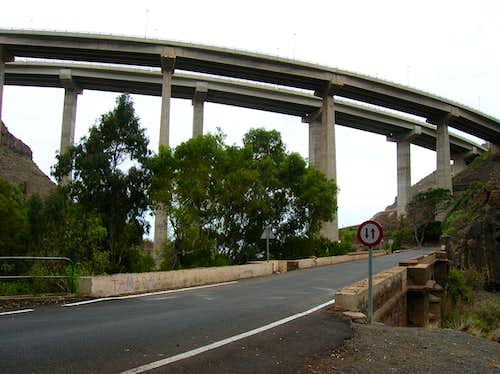 Looking back at the road GC-291 from a small parking lot at the trailhead to the climbing sectors in the Moya Gorge.

To reach the Moya Gorge, follow the GC-2 from Las Palmas, then take the exit to the road GC-291 (signs). Continue along that road, until you pass under a huge highway bridge (referred to as the Silva bridge in the guidebook). Drive over a small brigde and park under a big tree on the left.

There are only a few places for parking beside the road GC-291. We were warned by other climbers in the gorge not to leave anything in the car that might attract thieves. On quite a few occasions windows were smashed and things were stolen from cars parked there.

From the parking area an obvious path leads to the Moya Gorge. Just before reaching the bottom of the gorge, you need to step over a narrow drainage channel, followed by a steep step down to the muddy bottom.

It is advisable to use a stick or a walking pole to cross the first mud puddle, as stone-hopping with a heavy backpack can easily bring you out of balance.

The track to the first climbing sectors is obvious to follow, just keep walking next to the drainage channel a few hundred meters. 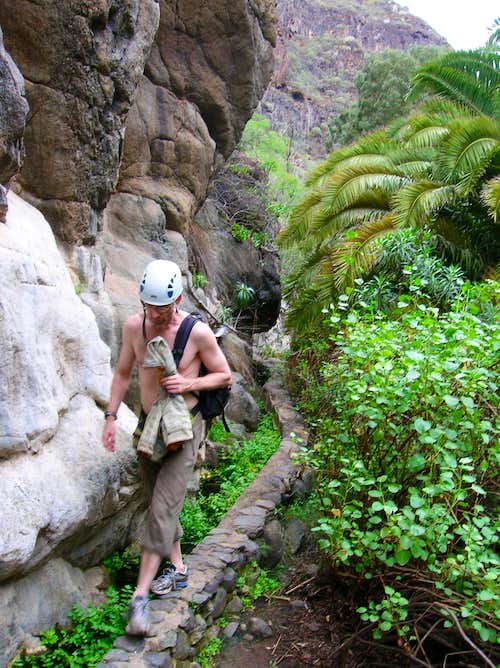 In the Moya Gorge, just before arriving at the first climbing sector, Cantonera Chica.

Rock faces in the Moya Gorge form clusters along the bottom of the gorge.  There is quite a bit of walking involved for approaching the last climbing sectors, and if you are there for the first time, it's easy to get a little sidetracked in the ravine, especially after passing the first two climbing sectors, Cantonera Chica and Cantonera Grande, when the trail continues on a hillside at your right, bypassing the wet areas in the gorge.

There are 5 climbing sectors in the Moya Gorge: Cantonera Chica, Cantonera Grande, Nogalito, Solajero and Paraíso. These sectors have a decent choice of low and medium grade routes, most of the climbs are of French grade 6. This makes the crag a great place for beginners and intermediate climbers alike. The routes are in good condition. The first two sectors have only short routes, the longer ones are deeper in the canyon. With a few exceptions, the top anchors are two bolts connected by a chain, with a screw-gate carabiner clipped in.

The wet bottom of the gorge creates an ideal habitat for insects. If you want to avoid itchy bites, bring some mosquito repellent, especially if you plan to climb at Paraíso, the last sector of the crag.


The following table gives an overview of the routes in the Moya Gorge climbing area, based on "Gran Canaria: Guia de Escalada Deportiva / Sport climbing guide". 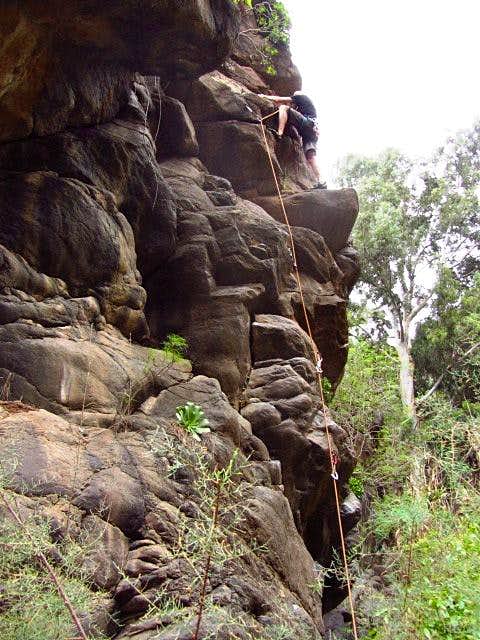 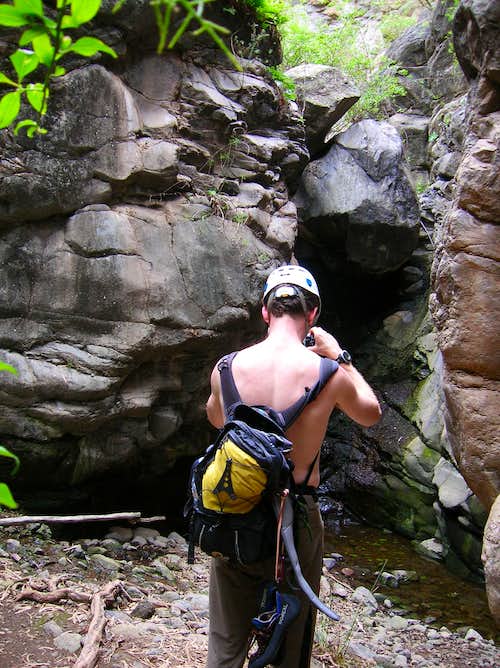 This is the end of the Moya Gorge climbing area. Water and shade make the last sector an ideal habitat for insects. Count on mosquito bites if you plan to climb here!

70 m rope and 12 quickdraws. Though for most of the routes on Gran Canaria a 60 m single rope is more than sufficient, some of the routes require a longer rope.