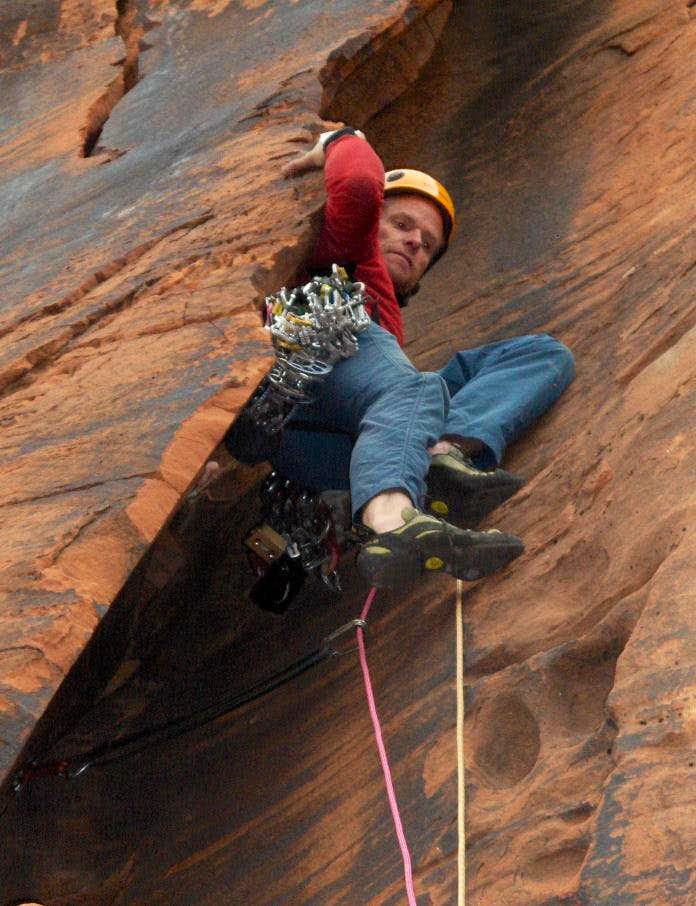 Nasty, unprotectable route in my opinion. Rarely climbed, thus dirty and untested varnish. I ran the route out only to have a piece give way (fully expected) and I fell a considerable distance ripping apart one of our double ropes on the sharp sandstone flake (photo). Very aesthetic, thus why I gave it a go. Up this large body consuming flake, then a tough move out left onto the hollow structure to run up a thin crack to the sloping finish. Don’t recommend trying it. Sand Dunes Area, Island in the Sky, Snow Canyon State Park, 2007
« PREV NEXT »

who is this guy?

a sprayer on SP and has been for quite some time (won't use his real name). I call him out at every corner thus he attacks my beta. One of his tactics are to pretend to know Barry Blanchard, Ron Olevsky, etc. Of course he knows none of them. Take his garbage spewed on this route for example: Ron states, "This wide chimney offers little protection..."so of course the Chief, as always, about 100% really, is full of shit. Ron gives it an R, I added the X, because I, Todd Goss and others confer, nobody really needs to do this thing anymore. The pro in the chimney is actually bomber, but when you move out onto the face, that crack you see above is in a frail flake that would not hold any gear you placed in it. Then at the top you are met with white deteriorating rock. A sometimes typical sandstone situation. Varnish failed on this climb, not the gear. Please ignore any beta from this dude, it is not beta, but rather spray garbage. He has never climbed any of the routes he comments on I can assure you. Cheers.

Re: who is this guy?

Another one of your lovely discussions with the Chief ;o)