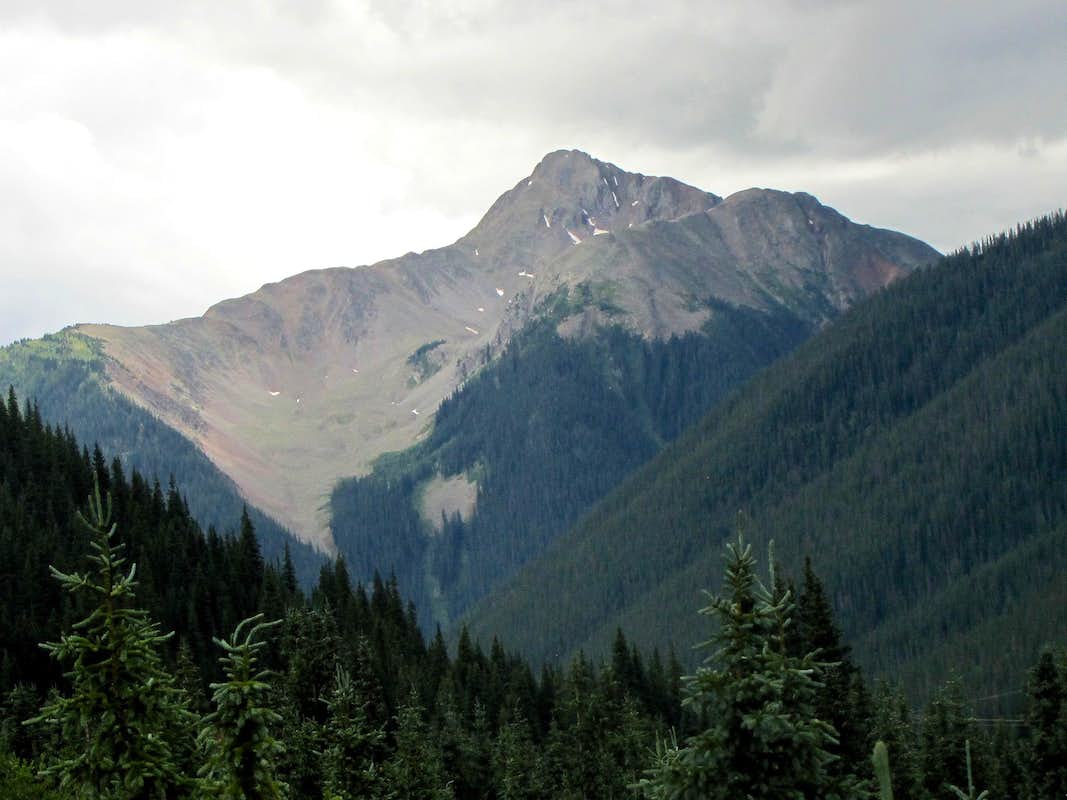 
Bear Mountain is visible as an impressive peak from Route 550 south of Red Mountain Pass in the San Juan Mountains of southwestern Colorado. Despite its spectacular looks and proximity to a major road, Bear Mountain does not have a trail and is rarely climbed. As of this writing, I have found no information about climbing this peak. I will describe below an approach via a trail that takes you into Bear Creek Valley where you will leave trail and go up a slope to get to the summit. Reaching this trail requires you to cross Mineral Creek.

It appears that Bear Mountain is featured on the back cover of Rocky Mountain Chocolate Factory cereal box.

There is no official trailhead. The idea is to cross Mineral Creek and look for the trail that goes into Bear Creek Valley. From Silverton, I drove roughly 2 miles north on Route 550 and parked at a pull-over just before the road to South Mineral Campground. Mineral Creek seemed to split into many branches here making it less deep. 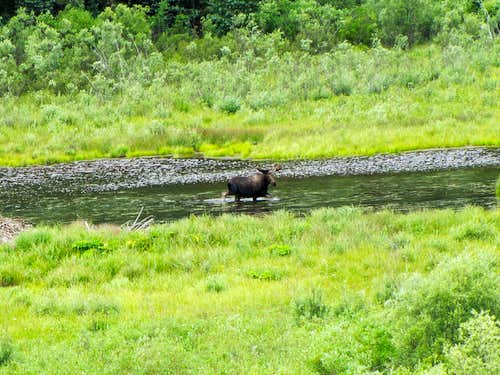 Moose in Mineral Creek, from where I parked

From Route 550, the first object is to cross Mineral Creek, which is no small mountain stream. I chose a spot just to the south of the junction of Route 550 and South Mineral Campground Road where the creek broke into many branches. When I crossed the creek in early August, it was no more than knee deep but at times of high water, it can obviously become much deeper. 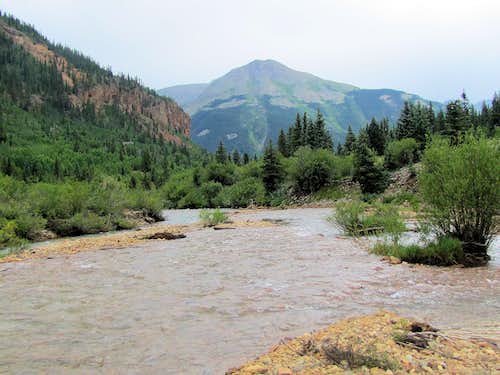 After crossing Mineral Creek, it is imperative that you find the Bear Creek Valley Trail. Satellite photos show that this trail reaches Mineral Creek area and then fades away. I chose GPS coordinates 37:48.8616 North, 107:41.8878 West and walked to it where the well-defined trail appeared. The trail made a broad switchback going up the forested slope entering Bear Creek Valley.

The forest soon thinned out/went away. Point 12613 ft could be seen at the south end of the valley. A steep rocky slope/cliff protruded into the side of the valley (I later left the trail, once I went beyond the protrusion). 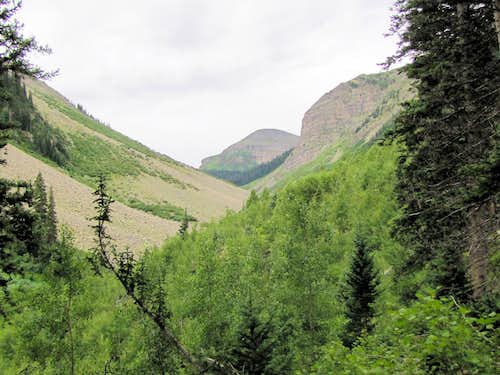 The nasty talus field of Sultan Mountain were visible across the valley. 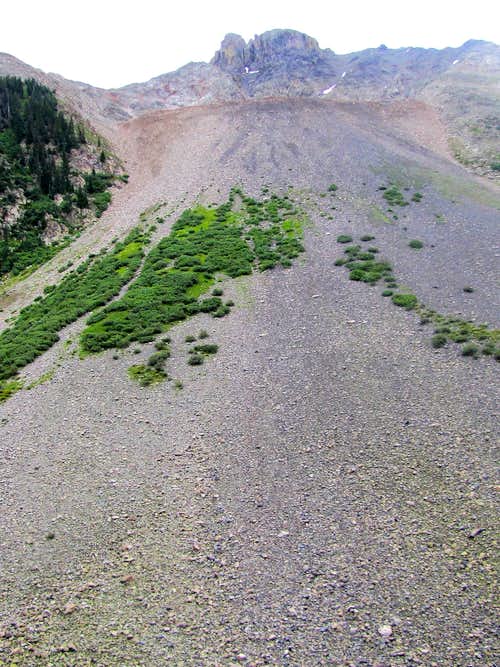 Behind me, the red colored slopes of Anvil Mountain made a colorful scene. 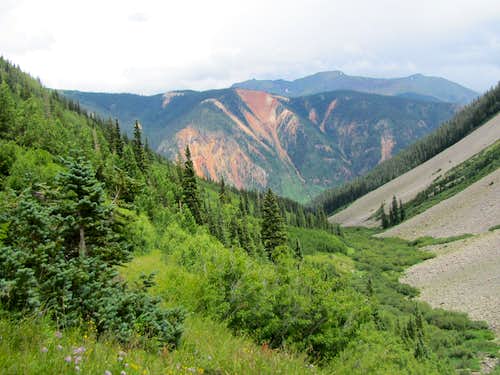 Anvil Mountain with Tower Mountain behind it

The trail traversed the slope directly below the rocky protuberance. 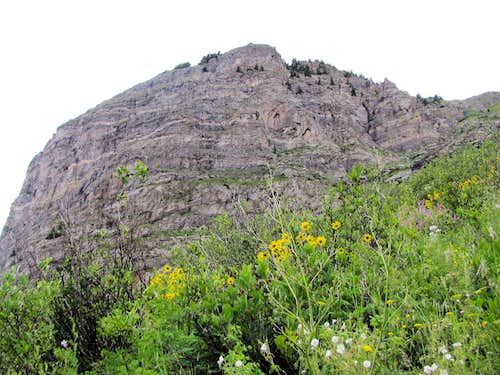 Beyond the rocky protuberance, a steep grassy slope appeared to my right (west). I left the trail at an elevation of 11000 ft and headed directly up the grassy slope. 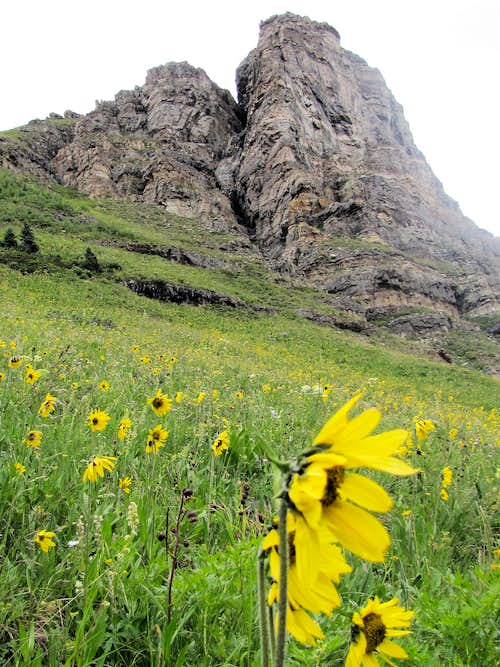 Where I left trail 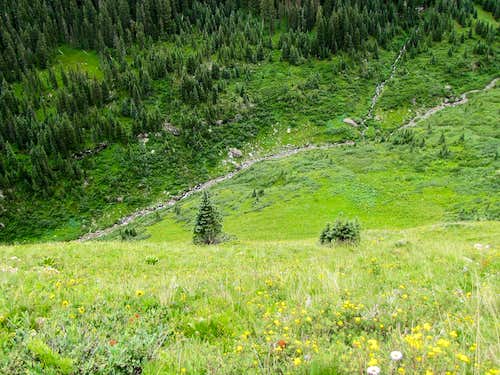 Looking down the steep part of grassy slope

Sultan Mountain, Grand Turk and the nameless 12ers to the south of them could be seen behind.

As I went higher, the slope eased up somewhat. The summit of Bear Mountain came to view. 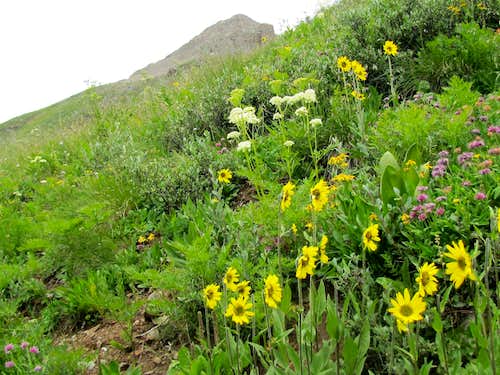 I was now in a beautiful flower-filled bowl.

The summit above the grassy slopes. 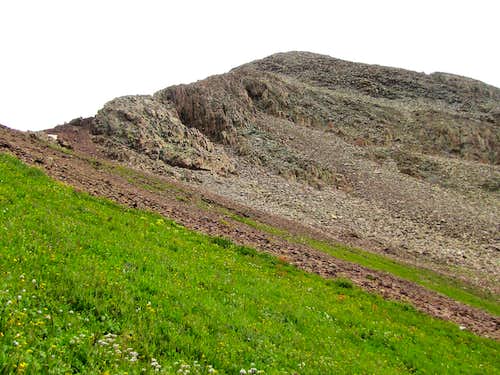 Walked up to a 12500 ft saddle and followed the ridgetop to the summit. 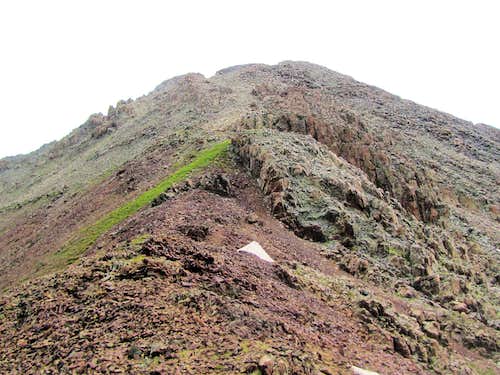 Views from the summit (it was a cloudy day, if you have better pictures let me know).