Bearfort Mountain is one of the major geographic features of the NJ Highlands. It is also probably one of the most scenic and rewarding hiking destinations in the state. Geologically part of the enigmatic Green Pond Outlier, its beds of purple and white conglomerate rise ruggedly above Greenwood Lake. The view across the lake from the top of the ridge encompasses a lot of the best hiking in the Northern NJ area: the Ramapo Mountains, the Wyanoke Plateau, and Sterling Forest in NY.

Quasi-official sources like the New Jersey 1K club list Bearfort Mountain's height as 1480 feet, but the location they give is in the middle of the woods, and, from the author's perspective, has limited appeal. I'm going with the height of the nice ridgetop view on the Earnest Walker trail, at approximately 1300 feet, because this is most people's destination, and it is a dramatic local highpoint. In any case, it's a high elevation for the area.

Several lakes line the 10 mile long ridge. The most famous is bouder-strewn Terrace Pond, a longstanding hiking destination since the 1930's, according to the NJ/NY Trail Conference, about four miles to the south of the main viewpoint. Two others, Surprise Lake and West Pond, are along the Earnest Walker trail, not far from the viewpoint, making a nice loop trip.

Different parts of Bearfort's ridge are accessible from three main trailheads. To avoid creating a long, dense block of driving directions, I'm only going to provide info about the one closest to most of the attractions. For more information, buy the NJ/NY Trail Conference's "Jersey Highlands Trails" map set, an incredibly detailed and comprehensive hiking map of the area.

The trailhead closest to the Ernest Walker Trail and the above mentioned viewpoint is located just south of the NJ/NY state line on Lakeside Road (County Road 511) on the west shore of Greenwood Lake in West Millford, NJ. It's a considerable distance from any major highway, but you can get there from I-287 or route 23. From 287, take exit 57 for Skyline Drive. Follow Skyline Drive north until it ends at a T intersection with Greenwood Lake Turnpike. Take a right on Greenwood Lake Turnpike north (County Road 511), and follow it through Ringwood and Hewitt. In West Millford, near the bottom of Greenwood Lake, take a right at the traffic light where Lakeside Road begins. You're still on CR 511, but it's poorly marked. After about three and a half miles, the trailhead will be on your left (away from the lake), in the same driveway as some sort of boat storage. If you reach the state line, you've gone too far.

From Route 23, take a right on Union Valley Road (County Road 513) in Newfoundland. After roughly nine miles, you'll come to the same traffic light mentioned above in West Millford, only from the other direction. Take a left on Lakeside Road, which is County Road 511 although it's poorly marked. See above.

The State Line trail, marked with blue blazes, climbs moderately up from the Lakeside Road trailhead. After a little under a mile, the yellow-blazes Ernest Walker trail begins off to the left. The blue trail ends roughly a quarter of a mile later at the Appalachian Trail. The yellow trail makes a short but steep and rocky ascent to a semi-bare ridge, with wide views to the west and south: 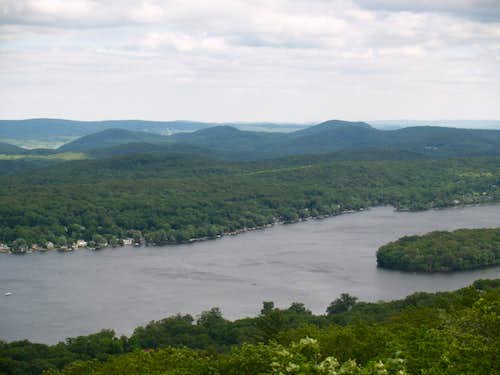 Board, Bear, and Windbeam Mountains (l to r)


Continuing south past the views, the yellow trail will take you to the east shore of Surprise Lake, and the northern terminus of the orange-blazed Quail trail, which goes to a trailhead at Warwick Turnpike. After this junction, the yellow trail traverses a lush west-facing slope covered with Rhododendron bushes, making a kind "Rhododendron Tunnel." Climbing up and down some rocks, the trail passes a close-range viewpoint, and then meets the northern terminus of the white-blazed Bearfort Ridge Trail (Following the Bearfort Ridge trail would lead to a Warwick Turnpike trailhead after two miles, and the scenic Terrace Pond after roughly another two). But if you continue on the yellow trail, you'll pass an overlook over West Pond, then a short trek to the yellow trail's end at the Appalachian Trail. From here, taking a right will lead you after a quarter of a mile to the end of the blue State Line Trail, which you can follow back to the trailhead. The whole trip is only a couple of miles, but it's rugged and rocky, so it requires a certain amount of energy.

Continuing north on the Appalachian Trail past the blue State Line Trail leads you to a great view over Greenwood Lake at a spot called "Grand View." It's similar to the view I talked about above (and, disappointingly, not in New Jersey), but faces a bit more towards the north, and is definitely worth the trip. It's less than half a mile. For the record, the same ridge changes name from Bearfort Mountain to Bellvale Mountain in New York.

Any time, but keep in mind that the trail will be muddy in spring, and buggy in summer.

Most of Bearfort mountain is in Abraham S. Hewitt State Forest, so camping is possible.