The Bears Ears are 2 distinct buttes in southeastern Utah, which can be seen from Arizona, New Mexico, and Colorado as they rise above the high deserts of the four corners region. They have been at the epicenter of a fiery debate on American public lands as the most prominent natural feature in an area full of cultural, geological, paleontological, and historical significance. The east peak is 9058 feet and the west peak is 8929. Many Native American tribes consider these peaks sacred, and are the symbol for an area with thousands of other sacred sites. 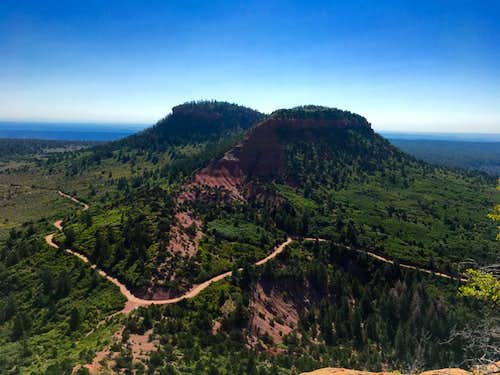 From Blanding, Utah, take US Highway 191 south and turn right on Utah Highway 95 and drive approximately 30 miles. Turn right onto Utah Highway 275 toward Natural Bridges. In 0.7 miles, turn right on Elk Mountain Road/FR0088. Drive 4.6 miles then continue on Forest Rd 092, which should get you to the saddle between the peaks. Continue past the saddle for another 0.5 miles until you see a rough dirt road with a marker saying no passing to motor vehicles.

The class 2 trail follows the closed dirt road for most of its course. There are a dozen fallen logs along the path. As long as you continue straight, you should encounter no problems. The one obstacle is a cluster of young pines that seem to block the trail but getting through them is quite easy.
Round-trip Length: 1.2 miles
Elevation Gain: 507 feet 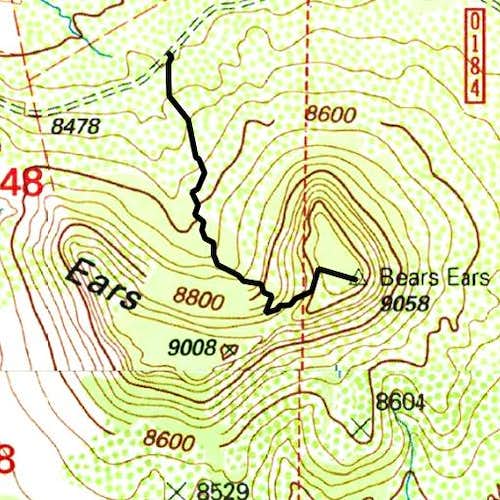 The US Forest Service manages this portion of Bears Ears National Monument. No permit is required to hike the Bears Ears though permits are often required for overnight trips into the surrounding canyons.
The Bears Ears are now part of Bears Ears National Monument, which was created on December 28, 2016 at the behest of Native American tribes to protect 1.35 million acres from further drilling, mining, fracking, and other extraction industries. Hiking, climbing, cattle grazing, firewood cutting, medicinal plant gathering are all still preserved as part of the cultural aspect of the area that deserves protection. 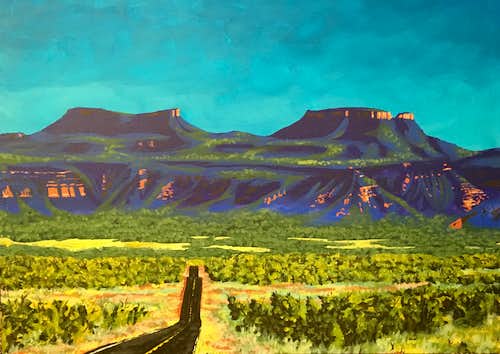 Year-round. Bring plenty of water in the summer and chances are you'll need snowshoes in the winter.
Check forecasts ahead of time and be aware of rain while driving on the dirt roads in the region as they are often impassable due to the mud and also flash floods.

The closest camp site is at Comb Wash about 15 miles east of the Natural Bridges turnoff. More camping areas will likely specified as the management plan for the monument is developed.
There are hotels in Blanding, Bluff, and Mexican Hat for those less fond of camping. 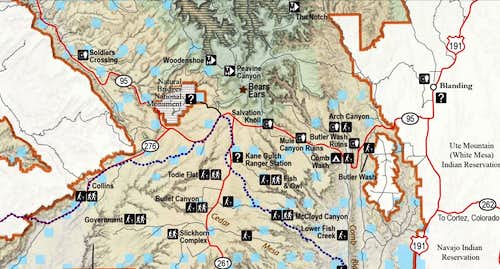 Utah Dine Bikeyah - A Native American-led "501(c)3 nonprofit organization that works toward healing of people and the Earth by supporting indigenous communities in protecting their culturally significant, ancestral lands."