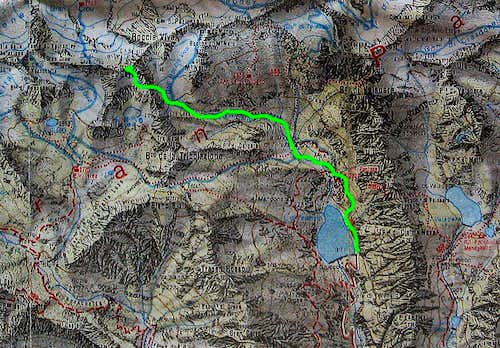 There is however a route that allows to climb on skis from the side of Piemonte(south).

The starting point is the lake of Teleccio (1.917m) in the valley of Piantonetto, with a carpark near its dam.
It is reachable by a paved road opened in March, that cames up from the village of Locana (Valle dell'Orco). Milano-Turin-Ivrea-Cuorgnè-Locana.

The ascent can be divided in two days sleeping at ref. Pontese (2.217m). The refuge is however just 300m above the lake, so not very usefull.
There is also the bivouac Carpano (2.865m), but it's placed a little bit out of the route.

The ascension is totally oriented to the south, and that does not allow a good snow condition.
So it's recommend starting very soon to find good snow in the couloir below the peak. It's a route very arduous.

From the carpark near the dam, take the indication for the ref. Pontese. Usually climb the path on foot, because usually in the first part the snow is not enough for ski.

From the refuge go down few metres to reach the flat plateau called "Alpe Muanda".
Once arrived at the end of the plateau below the rocky ramparts that host the biv.Carpano, turn decidedly to the left.
From here climb the steep slope at the foot of the impressive "Becco della Tribolazione".

At the end of this slope, the "Becca di Gay" will be visible, and then point toward the snowy narrow couloir that descents from it.
The couloir is long, more or less 200 meters with a maximum steep of 45°.
In relation of the snow conditions, decide if climb it with axe and crampons.

The couloir leads to an exposed snow shoulder, wherefrom the Gran Paradiso and Valnontey will be visible.
Replace the skis and climb with close zigzag, pointing to the top on the right direction.

Once reached the summit rocks, deposit the skis, and continue on foot with an easy climbing (I°/II°) up to the top (3.621m).
In descent follow the same route.