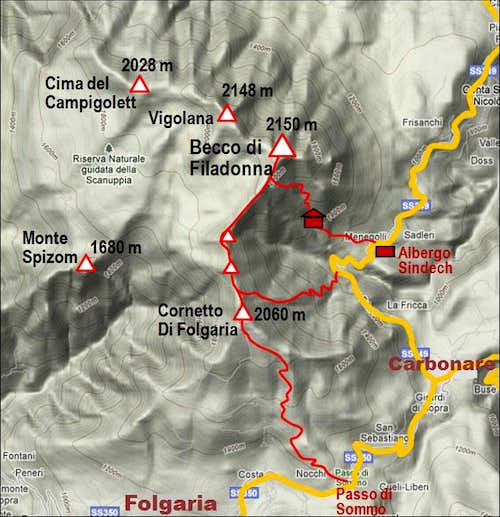 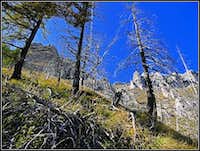 Becco di Filadonna is, together with Vigolana, a wonderful limestone massif, a part of Prealpi Venete e Trentine. While many visitors come from the other side, also the eastern, or more precisely the south-eastern side is very interesting. It offers a nice, scenic 3 hours long ascent and, if you don't want to descend by the same route, with an extention towards the south, also a nice round tour.

The ascent is supported by a a mountain hut (for a half-day ascent not really needed, but still...), then you walk up over a slope, where the whole devastation of a big mountain fire can be observed, you pass several picturesque rock towers and finally gain the summit ridge some 100 meters below the top. A big panorama opens and the scene of the picturesque Vigolana group is also worth of a whole day hike.

0. General: From 1100 m to 2150 m, exposition E and S. At first a comfortable path through woods to the mountain hut, then a bit steeper and narrower path over the SE slope on the main ridge, finally a short summit ascent, not too steep and exposed. Gear: Good shoes and poles. In summer the ascent can be hot - above the hut there's no water. By the Swiss Scale for grading hikes the difficulty would be T2.
1. Effort: cca 1050 m, 3 h.
2. Power: 1 - no difficulties, only walk up.
3. Psyche: 2 - easy. Only a few places below the summit require some care.
4. Orientation: 1 - no difficulties, well marked.

The trailhead is by Albergo Sindech (1100 m), a restaurant on the road between Trento and Folgaria, via Vigolo Vattaro. The distance from Trento is around 20 km. On this road also a regular bus line operates. So, you can reach the trailhead either from the Trento side or from the Folgaria side, but also from the east, from Val d'Astico. The round tour can best be done in the counter clockwise direction, starting at the restaurant and getting down on the road near Passo della Fricca, 1113 m, a bit SW of the restaurant. Finally, if you can overcome the connection by the road, you can descend also much further towards the south - a very nice descent goes over the summit of Cornetto and down on Passo del Sommo, 1343 m, or to Folgaria.

From the restaurant by a well marked path uphills towards the west. We soon cross a creek and then go through the woods in many turns up. After good 45 minutes we reach a small notch in a forrest ridge, stepping through the rocks a nice view into the deep Vallon del Torrente Centa opens. The path turns right and soon we reach the mountain hut on 1572 m.

From there the view towards the east, on the green, undulated Lavarone plateau and the surroundings, is nicely opened. We continue right of the hut up and across the slopes. After a short crossing the path branches. We allways keep left, upwards. Then the path starts winding up the slope, which is really special (2011). Hundresd of meters of altitude are covered with dead branches of pine bushes, the remains of a big mountain fire. You rarely anywhere see such a devastation, and yet the plants will most likely recover in decades. This slope is additionally interesting because of many rock towers rising out of it. And above everything is a high, rocky barrier of summit walls.

The path does a few long turns, we gain enough altitude to reach the bottom of the summit walls, where we cross towards the left into a high valley, which leads towards the summit ridge. The path is comfortable, it just goes in several turns up the slope. On the altitude of cca 2030 m (Bus de le Zaole) we exit on the southern ridge, where the panorama on the other side opens. Here the mountain itself is in a form of a high, gently rising plateau, mostly densely covered by pine bushes and with a few meadows between. Towards the north, the summit rocks are rising. On the point where we gained the main ridge, there is a high karst cave, protected by cables (just to prevent falling in).

To summit Becco di Filadonna, we turn right, pass by the lef the first vertical rocky crag and then soon catch an ascending ledge. The broader path leads by it to a big cross on the northern shoulder, while a blue marked path deters right already after the big crag. It's good to visit first the big cross, turn there right (by a narrow ledge) into the SE face and from the nearby edge climb on the summit ridge and on top. Many visitors don't even go on top but get satisfied with only visiting the cross. From the real summit then you best descend by the blue marked path towards the south.

Descent. You can of course descend by the same route towards Albergo Sindech. But it is much more interesting if you continue by the south ridge towards the summit of Cornetto. That path is marked with blue marks and is also not difficult at all. From Bus de le Zaole you continue by the southern ridge, a bit up and town on Terza Cima (the third summit of Cornetto), 2027 m, Seconda Cima, 1996 m, and finally on the col below Cornetto, 2060 m. There one marked path descend left down towards Passo della Fricca (by the ridge you can continue on Cornetto and further to Folgaria or passo del Sommo). A narrow and occasionally steep path leads across the slope down - first on an alpine meadow on the ridge - then in several turns steeply down. After hitting the road, you turn left and go till the restaurant. 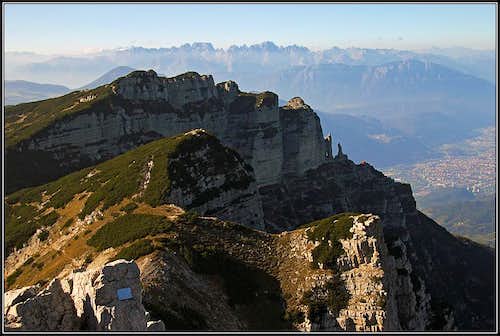 The reward is nice summit view