Beinn Alligin is the name given to the small collection of peaks located to the western boundaries of Torridon and to the north of the shores of Upper Loch Torridon. The peak is one of the three famous Torridonian groups of peaks, the other two being Beinn Eighe and Liathach. It is suggested that first time visitors to Torridon should attempt the traverse of Beinn Alligin first as it is less complex than its two neighbours, although to suggest that it is worthy of your attention only as an introduction/preperation for other peaks would be somewhat demeaning, as this is a truly splendid peak in its own right.

Torridon is a truly beautiful glen that has been described as 'exhibiting more of mountain beauty than any other district of Scotland, including the Isle of Skye'. The peaks here are among the oldest peaks to be found in the whole of Europe, being some 2500 to 3000 million years old, and are formed by red Torridonian sandstone with some being draped in a covering of white quartzite.

Beinn Alligin is best viewed from the south on the road connecting Torridon and Shieldaig. From this vantage point the entire topography of this mini range can be seen to good example, with the interesting features of the Eag Dubh (Black Cleft) and Na Rathanan (Horns of Alligin) clearly visible. The Eag Dubh is a large section of the cliff face on Sgurr Mhor that at some point in time gave way to the forces of gravity. This section plunges some 550m down towards the floor of the corrie, Toll a'Mhadaidh, which is littered with gigantic boulders. The Horns of Alligin are a group of three rocky pinnacles that give no real difficulty, although are narrow and exposed in places with sensational drops to their eastern side. These can be avoided via a path that skirts along the western sides. There are two easy winter climbs recorded on the horns. The first, Deep South Gully - 250m Grade 1, is in the deep gully between the first and second horns. The second, Deep North Gully - 250m Grade 2, is in the other deep gully between the second and third horns.

The names Jewelled Hill and Hill of the Damsel among the translations give the feeling that Beinn Alligin has a somewhat feminine feel to it. Confirmation of this is only a short approach walk away, when once upon her, a true appreciation of her graceful curves and beauty will leave you in awe.

The peaks can be accessed via 2 stalkers paths that are located at the car park next to the bridge over the Abhainn Coire Mhic Nobuil. This can be found on the road that connects Torridon with Alligin. Each of the stalkers paths gives a route for a full traverse over Beinn Alligin, either clockwise or anti-clockwise. The anti-clockwise route (I used this one) scales the Horns first and the initial steep stages of this would be difficult in descent. The clockwise route climbs up through Coire nan Laogh, which is quite badly eroded in the latter stages. The latter route also supposedly offers the best lighting opportunities for photography.

The full traverse of Beinn Alligin should take the average person between 5 and 7 hours to complete.

For arriving in Scotland and making your way to Beinn Alligin in Torridon, the best airports to arrive in are;

Inverness Airport is the closest to the peaks of Torridon, a mear 50 miles away. Here are a few links for rental car companies should you require this service; Arnold Clark, Easy Car, Hertz

Car is really the best option for transport to and around the Torridon region. There is public transport available, however it is slightly limited.

Detailed car directions can be inputed and given on the following website; AA Route Planner

Citylink buses run from Glasgow, Edinburgh and Inverness to Ullapool. It will be necessary to get off the bus prior to Ullapool. Any further travel will require the use of a Postbus service ran by the Royal Mail. This runs from Monday to Saturday.

Trains are available from all major cities and towns. Trains should be taken to Inverness. From here another train to Kyle of Lochalsh can be boarded. There are various stops in the vacinity of Torridon, but further transport will be required to reach Torridon itself. Train timetables can be found at Scotrail.

The Torridon area is mainly owned by The National Trust for Scotland. The trust is a charity organisation and not a government body and depends on the subscriptions of its members and donations for the upkeep of their large estates.

There are numerous locations that are ideal for basing yourself for Beinn Alligin or any of the other Torridon peaks. Torridon itself, obviously, is the best. Other locations closeby that can be used include; Kinlochewe, Sheildaig, Lochcarron, Achnasheen or Gairloch. Below is a selection of some of the types of accommodation available.

There are two free campsites available, although space is limited on these. The first is in Torridon itself, located next to the Youth Hostel and its toilet/shower block. The second is in Kinlochewe at Taagan. I say these are both free, but there is a possibility that at high season an honesty box will be on-site for payment/donations to be made.

There is also the option to wild camp. Wild camping is totally legal in Scotland, again due to the Land Reform (Scotland) Act 2003 that was mentioned earlier. Here are some of the basic rules that should be adopted when wild camping;

Beinn Alligin is a popular destination in the summer months, especially at the weekends, when most of the winter snow has subsided. Generally between the months of May to October there will be little snow found, although any still found will mainly be in the gullies or on northern facing sides of the peak.

Tom na Gruagaich & Meall an Laoigh on the descent from Sgurr Mhor. (Photo by Boydie)

In winter, climbing Beinn Alligin is a serious undertaking and should not be attempted by the inexperienced. Whatever you do, do not underestimate this mountain as it has many dangers and is prone to avalanche at this time of year. The amount of daylight hours during the winter months in the area is also limited and you should therefore ensure you have allowed enough time to be completed before the sun sets.

The following video is from a vintage television programme that was shown on Scottish Television in the late 80's, called the Munro Show. This episode, obviously, is on Beinn Alligin. The video states that Tom na Gruagaich is a Munro top, however this has been elevated to full Munro since the show was made. Enjoy!

Sgurr Mhor and the peaks of Torridon. (Photo by: Boydie)

The weather conditions in the Torridon can alter rapidly due to its location close to the western coast of Scotland and you should ensure you are fully prepared for all weather eventualities. The following websites will provide invaluable information on the expected conditions for your planned trip. The first link is also posted in the Torridon visitors centre on a daily basis. 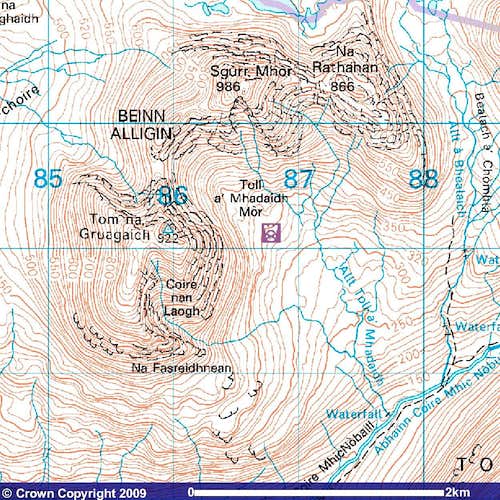 The Scottish Peaks by W. A. Poucher 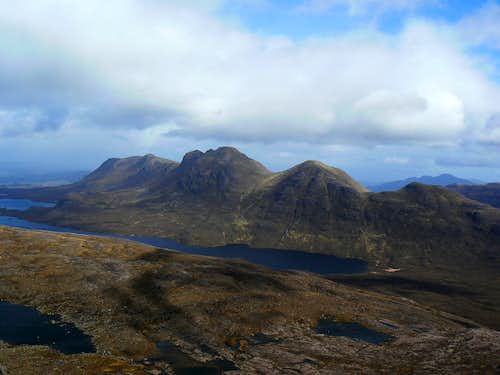 The Corbett Baosbheinn from the Horns. (Photo by: Boydie)

Torridon & Sheildaig (A really comprehensive guide to the area)

The National Trust for Scotland