Located near Evergreen, CO, Bergen Peak can be seen from Denver, however, it's peak is somewhat hard to make out for it blends in with the surrounding, higher peaks just to the west.

Bergen Peak is an unranked peak with a prominence of 248'.

Bergen Peak's summit is actually in a Denver Mountain Park, but it's eastern and southern approaches start in the Elk Meadows Jefferson County Open Space. 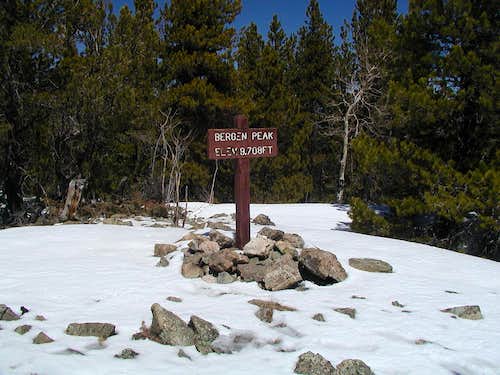 From the wooded and rather flat summit of Bergen Peak the views are somewhat obscured due to the trees, however from a vantage point just south of the actual summit there are nice views in all directions except the north. From this rocky viewpoint, you can see the peaks of the Mt. Evans massif, including Epaulet Mountain, Spalding Mountain, Mount Warren, and Mount Evans as well as Chief and Squaw Mountains to the west. To the south Thunder Butte can be seen and Pikes Peak rears its head in the far distance. Mount Morrison, Denver and the plains can be seen to the east.

On the trail to Bergen's summit, which comes up from the east, then circles around to the north and finally up the western side of Bergen Peak, there is at least one spot were there is a view off to the north of Longs Peak and the peaks of both the Indian Peaks and James Peak Wilderness areas. 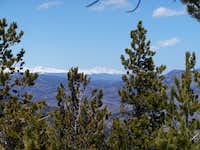 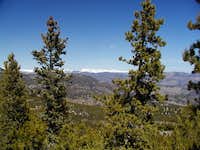 Elk Meadows and the eastern slopes of Bergen Peak consist of open grasslands and meadows at the lower, less steep elevations. Higher elevations include open ponderosa pine forests where elk and deer can be found. Higher yet, on the steeper slopes are dense forests of douglas fir and scattered aspen groves. And in the highest elevations, the slopes are dominated by lodgepole pine.

From Denver take I-70 to the Evergreen Parkway exit (exit 252) and head south on CO 74 past Bergen Park. Continue about 2 1/2 miles to the stoplight at Lewis Ridge Road and turn right followed by another right turn immediately after turning off of the highway. This dirt road will then take you to a large parking area where there are toilets, but no water. This trailhead offers a number of hiking trails in Elk Meadows, including at least two that head towards Bergen Peak. The elevation of this trailhead is about 7,560'.

A second parking area can be found by continuing south on Evergreen Parkway to the next stoplight at Stagecoach Blvd. Here turn west (right) and go about 1 1/4 miles to a smaller parking area on the north side of the road. This parking area also has toilets, but no water. The trailhead offers access to Bergen Peak's southern approach, as well as an off-leash dog park on the south side of Stagecoach Blvd. The elevation of this trailhead is about 7,790'.

For information on hiking Bergen Peak, check out the Routes under the children of this page.

There are no fees or permits necessary to hike in either Elk Meadows Open Space or in the Denver Mountain Park. And there are no restrictions as to when the park is open.

Part of the Bergen Peak Trail goes through the Bergen Peak Wildlife Area which is managed by the Colorado Division of Wildlife and hunting is permitted in this area, so if you are hiking on this section of trail during big game season, which is typically in October and November, it would be best to wear hunter orange.

Dogs are required to be on a leash.

There is no camping allowed with either Elk Meadows or the Denver Mountain Park, but given the round trip distance of about 10 miles, camping isn't necessary to hike to the summit.