Berry Butte is one of the Grand Canyon's 'newest' buttes. Officially named in 1997-1998 for famous Pete Berry, the entrepreneur and owner of the Last Chance Mine on nearby horseshoe mesa, and the reason the Grandview exists for park visitors to enjoy. The summit is one of about a dozen non-technical summits on the south rim with minimal approach thanks to the aforementioned Grandview Trail. The large summit is guarded by 30' white sandstone cliffs, but a nice class 3 chimney on the southeast corner provides access to the top. The approach is tedious and brushy for a South Rim peak, and not the best intro to Grand Canyon climbing, but the isolation for the minimal distance more than make up for the scrapes and bruises you'll get en route.

To get there, enter Grand Canyon NP via one of the various South Rim entrances and drive to Grandview Point, about 10 miles east of the Mather Point Visitor Center. 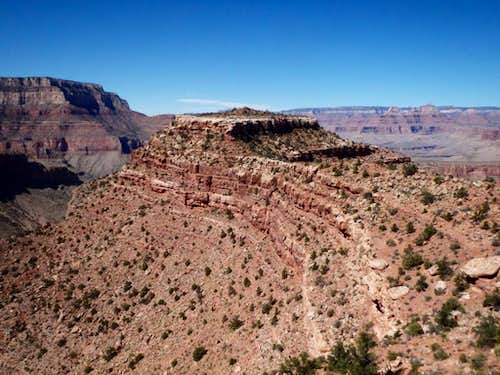 Nearing Berry Butte
Hike down the Grandview Trail through several switchbacks to a notch separating the Grapevine and Cottonwood Creek drainages. Continue along the maintained trail as it skirts west beneath a prominent fin of sandstone. When the trail cuts east around the sandstone to traverse towards the ridgeline that drops to Horseshoe Mesa, continue northwest along the ridgeline towards Unnamed Butte utilizing a well defined use trail. The trail starts to fade as various rock features block progress along the ridgeline, but it is easy to avoid them on the western side.
At the first major notch along the ridgeline, head down the slopes angling southwest, which avoids some of the steeper cliffs in the upper gully. The gully itself can be descended directly, but does require some down-climbing higher up. Continue down the loose class 2 slopes until reaching the redstone and Hermit Shale below. If you've not enjoyed yourself up until this point, now is a good time to turn back, it gets worse before it gets better. 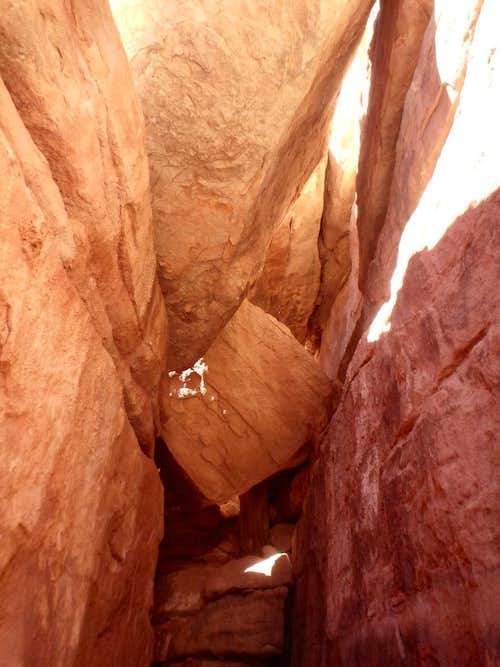 The class 3 crux
Once on the Hermit Shale, start a descending traverse northwest towards Berry Butte, dropping through a few small Supai cliff bands (class 2- easy class 3) en route. The terrain is most tedious on the initial part of the traverse as you must negotiate past several steep and loose gullies. The tedium improves as you clear the summit of Unnamed Butte above, with more goat and deer trails cheating higher towards the cliff bands as opposed to dropping too far into the drainage.
As you near the isthmus between Berry Butte and the ridgeline connecting with Unnamed Butte, the brush ends and some enjoyable hiking and scrambling can finally begin. There is a small butte along the ridgeline separating you from Berry, which can be easily scrambled up and over. Nearing the summit cliff band, work your way left (south) towards a series of ledges and a prominent class 3 chimney that will get you through the 30' summit cliffs to the top. The chimney is pretty vertical, but there are really nice lips and ledges the entire way up to make for very safe scrambling. Once on the summit plateau, hike the remaining distance to the high point and enjoy the views!

Admission to GCNP is $30 for 7 days. I highly recommend the "America the Beautiful" Pass for $80, which covers the entrance fees for all federally managed parks and land for one year. No additional permits are needed unless you're planning on incorporating this into a backcountry trip, however the nearest reliable water source is a spring near Horseshoe Mesa.

As with most hiking in Arizona, Fall and Spring are the best. Summer can be brutally hot, with no water sources. Winter can bring serious ice on the Grandview Trail, which is entirely in shade on the north facing wall of the rim. 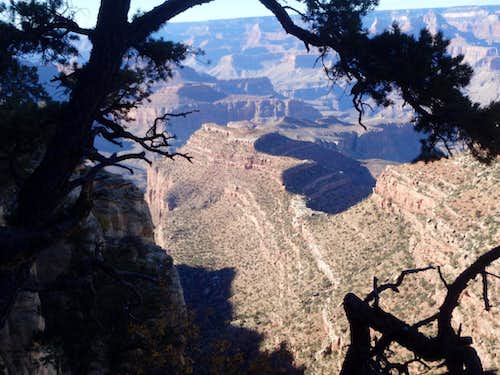 There are two developed campgrounds on the South Rim: Mather (which takes reservations) and Desert View.
There is plenty of places for camping at large in the National Forest just outside the park including down FS 310, only a mile-ish past Grandview Point, with nice, free camping near Grandview Lookout Tower.