High, mighty, and overshadowed by the far more popular Lost River Mountains next door, the Lemhi’s are one of Idaho’s many great yet overlooked ranges. Millions catch a glimpse of it from I-15 when, on a clear day, the double summit of Saddle Mountain, the range’s southern harbinger, occasionally distinguishes itself from the Ohio-like flatness of the Snake River Plain. 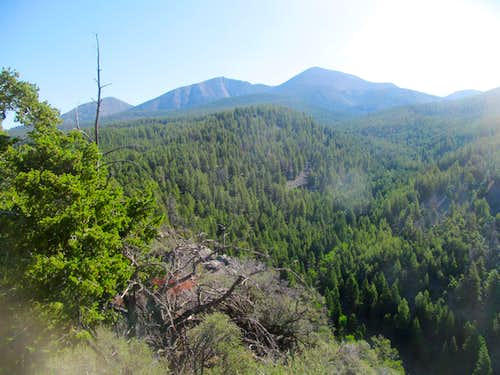 Saddle, along with Diamond Peak and many of the range’s southern summits, are rocky, dry peaks more reminiscent of Basin and Range topography combined with large, exposed fault lines similar to the Lost Rivers nearby. Further to the north, peaks like May and Lem are much more lush, rugged, greener, with glacially influenced cirques and lakes. It is interesting to note for the historically minded that these mountains are the first glimpsed by Meriwether Lewis, William Clark, and their guide Sacajawea when they first crossed the Continental Divide (in the Beaverhead Mountains) at Lemhi Pass to the north, and it was near what is now the town of Salmon that Sacajawea reunited with her native tribe that she had not seen since she was taken captive as a child. 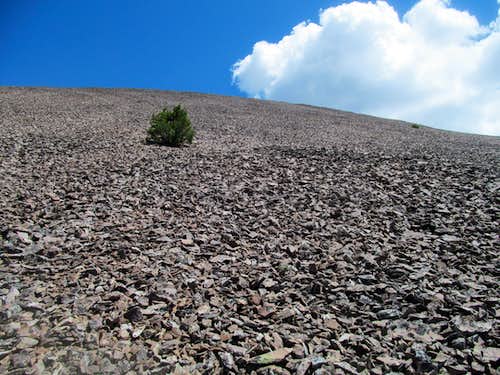 Basic Talus up Big Creek Peak
Big Creek Peak, though a more northerly peak, is never the less one of the dry ones, standing along with Flatiron Mountain as a separate divide off the main Lemhi crest south and west of Big Timber Creek. As a result, it is one of the four evenly spaced 2000 ft prominence peaks in the range, and gives the casual climber a good bleacher seat perspective of the main Lemhi Crest from Diamond to the south to May and Lem Peaks in the north. 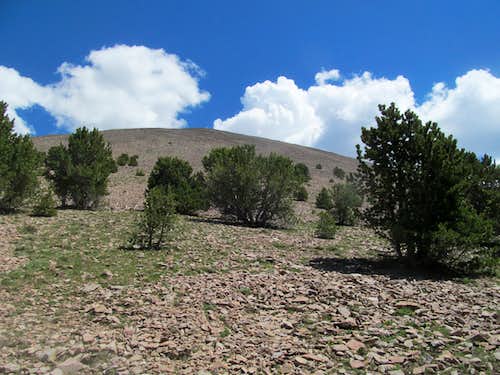 Last 1000 feet of climbing on Big Creek
Leaving aside its prominence, elevation and views, Big Creek Peak is simply a massive hunk of talus that sits a little higher than its neighbors.  There are no trails to the top of this peak, and any approach will require a decent amount of elevation gain, a moderate to long approach, ample cross country travel, but nothing more than class 2 to class 3 travel. 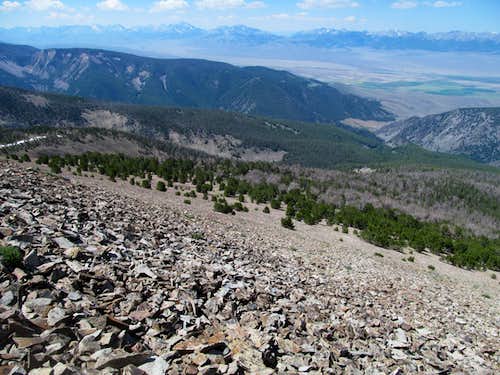 Borah & the Lost Rivers viewed along the route

My Basic Betch route from the southwest is around 9.5 to 10 miles roundtrip, with 4,700 ft of elevation gain, and nothing worse than class 2 terrain. Tom Lopez describes ascending this peak from Yellow Peak in his book, which would entail more elevation gain, mileage, and class 3 scrambling. Most of this area is open country, so any variation of routes is possible. 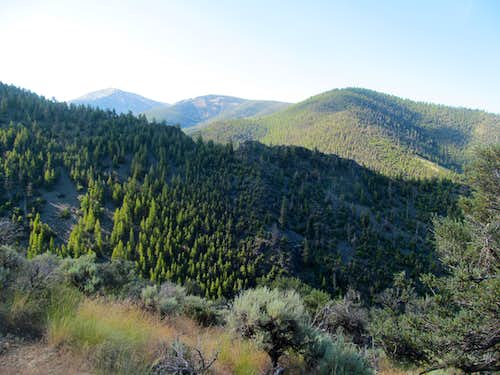 For the Basic Betch Route, make your way to the Big Creek Campground on the western side of the Lemhi’s. The main road connecting Howe ID to the south and US-93 to the north in the Pahsimeroi Valley adopts multiple monikers along the way. Leaving Howe it is known as the Little Lost River Highway, but also Pahsimeroi Road and then Goldburg Road near its junction with the Big Creek Campground access road. Leaving US-93 in the north it seems to be named the May-Patterson Road, but then turns into the Farm to Market Road.


Some of the road is paved closed to Howe, and large stretches of it consists of good gravel. There may be a few turns and junctions along its path; just take care to stay on the main road.

Approaching Big Creek from the south

Regardless of name, the junction to Big Creek Campground (FS 97) is around 59 miles travelling from Howe in the south; past the Summit Reservoir take care not to take the left onto Doublesprings Road. Drive FS 97 approximately three miles to its terminus. Passenger cars will make it most of the way, but the last small section of the road descending down to the creek is steep, rocky, and a little rough. There is a large parking lot just before this; park here if you are unsure of your car’s capabilities; it’s only a few minutes walk to the campground and the start of the trail.


From the north, leave US-93 around 17 miles north of Challis or 41 miles south of Salmon. Follow the May/Patterson/Farm-to-Market/Pahsimeroi road around 30 miles to the campground junction. 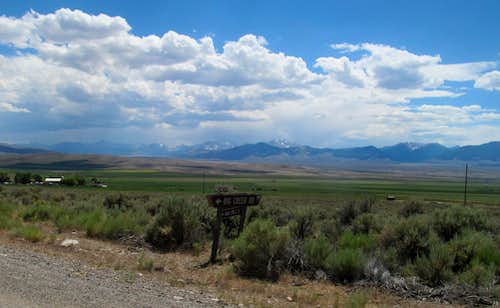 Approaches from the north/east would be possible from Leadore on the other side of the range.

I called my route the Basic Betch Route because the same thought kept reiterating itself in my head as I slogged up the talus on the SW slopes: “this so basic”. Because really everything about this route is basic: respectable distance and gain, but nothing too strenuous…mostly cross country travel but straightforward with few curveballs, and 1000 feet of pure talus at the end, not too loose, no required scrambling, just basic. Credit to the route goes to Greg Jagielski as well, who had approached the peak in the same manner awhile back, and confirmed the Basic nature of the route beforehand. 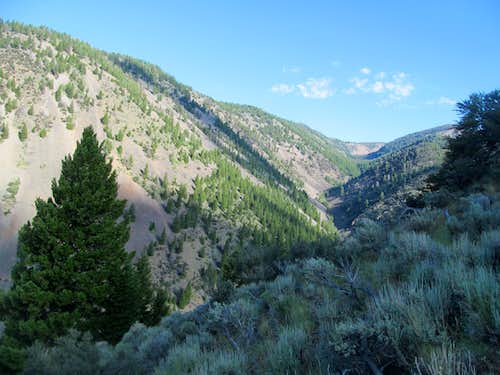 North Fork Big Creek; Big Creek Peak out of sight on the right

To get to the lower parking lot from the upper at Big Creek Campground, follow the rough road down into shaded areas near the creek and turn left, where there’s a small but ample parking lot for all but the lowest clearance cars. Make your way back to the creek from here, and take the trail leading right as it travels north up the North Fork of Big Creek. About a half mile up the trail there is a tributary creek that comes in from the right. On the ascent I left the trail past here climbing the ridge directly to point 7,613 on the topo maps, thinking that this would be the most straightforward route. While the top of 7,613 did yield some good views of Big Creek and Flatiron, the SW ridge ascending it was brushy and rocky, requiring scrambling that was slightly challenging without being fun.


Your goal should be to reach a small saddle northeast of 7,613 connecting that with a wide ridge leading up to the summit of Big Creek. On my way down from that saddle I discovered a climber’s trail back to the main Big Creek Trail. Since I only followed it halfway down I’m not sure where it ultimately led, but I’d recommend utilizing this trail as it makes for quicker progress, parting with it at some point with the ultimate goal of reaching the saddle. I marked a waypoint at the junction of this trail and the North Fork Big Creek Trail, a little over a mile from the trailhead, at N44 27.242 W113 35.605, around 6,791 feet of elevation. It’s a very hard right turn so keep an eye out, as it’s probably easy to miss on the ascent.

Make your way to the saddle, at waypoint N44 27.230 W113 35.184, 7,559 elevation or so. The rest of the route is a generalization. Head northeast from here for a few thousand feet or so through the trees, emerging above timberline, and ascend a thousand feet of rockpile, rocks too large to be scree and too small to be talus, but never the less stable and good footing, to the top. From the saddle to timberline there is a slight but still defined forested ridge. When ascending through the trees try to stay as much as possible on the crest of this ridge, always gaining higher ground when possible; this will help you avoid some annoying deadfall areas on either side, as I found on my downclimb. You will find alternating sections along this stretch of the woods, with flat areas between with moderate inclines.

I realize that my description is somewhat vague, but the route by nature is pretty basic without that many distinguishing features, thus the name. I attached my GPS tracks, which can be downloaded at the top of this page. Below are the trax embedded via Peakbagger.org.  As the tracks leave the trailhead, follow the left/upper portion taking a hard right turn ascending to the 7,559 ft saddle, which will allow you to follow the climber’s trail.  From the saddle where my ascending and descending tracks meet to the summit, follow the right one of the parallel tracks to the summit, which will keep you on the modest ridge and avoid lower deadfall.

Big Creek Campground is obviously a good base camp for this peak. Most of this area is open land for car camping as long as you take care to avoid the private land and ranches. Be aware that Howe is limited for amenities. In order of proximity, Challis, Salmon, and Arco are probably your best bets for gas, food, and motel lodging in the area. Leadore on the other side of the range may have a limited services, including a couple of bars/cafes.

The consensus seems to be that while Grizzlies may inhabit the nearby Beaverheads, as of now they are not found in the Lemhi mountains. Bring Bear Spray regardless, as plenty of black bears likely roam the range.

I'd imagine the main roads in the Pahsimeroi Valley to be periodically maintained in the winter to access the small ranching communities, but I doubt anyone ploughs the Big Creek Campground access road, so be prepared for a possible extra six miles round trip. 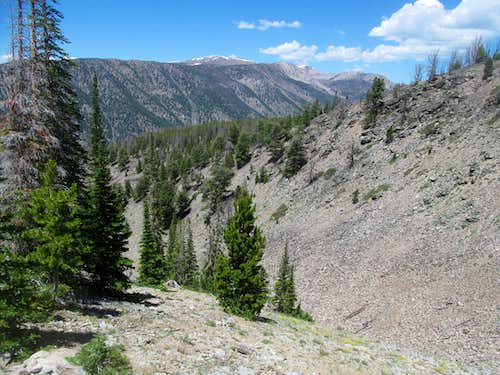