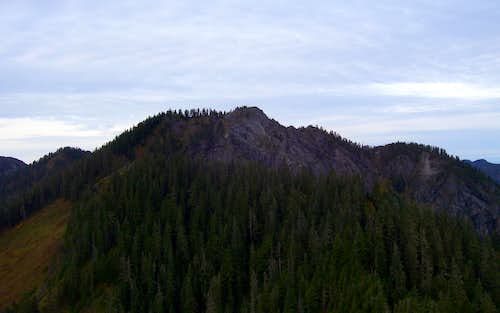 Big Gee from Point 4600+ (one mile east)
Well, I was moping around the house today, finding myself with nothing to do on a miserable, wet March day. I decided to kill some time on Summitpost while I dreamed of the warm, sunny days ahead. On a whim, I pulled up a map view of my local area so I could plan some future trips. It then came to my attention that there was a large, gaping hole on the northeast portion of "Logger's Island" (the area bounded by the Skagit, Sauk, and North Stillaguamish valleys) with no 'red pins' in it. I knew that Big Gee was the peak of prominence that lurked in this uncharted area, and suddenly, I knew that I had a worthy project for this depressing, rainy morning.
Despite the fact that Big Gee is the fourth most prominent peak in Skagit County (a whopping 3160' of prominence), it receives very little attention from hikers and scramblers in the area. This is most likely due to the fact that there is a well-defined trail leading to Gee Point, a high point located 1.5 miles to the south. For most hikers, the view from Gee Point is perfectly adequate, leaving Big Gee as the domain of obsessive-compulsive peakbagger types. It is tempting to think that one would be able to connect to Big Gee via the ridge from Gee Point, but steep terrain makes an approach from the northeast more appealing. Gee Point was once a lookout site for the USFS. A small cabin was built in 1930, followed by a more conventional lookout in 1934 - this was abandoned in 1964.

"The Gees" from "Anxious Groom Mountain" - five miles to the southeast. L to R - Point 4880+, Gee Point, Gee Peak, Golly Peak (center), Big Gee, Point 4600+.
Disclaimer: My scramble up Big Gee was done several years ago, before I started contributing to Summitpost. My apologies in advance if the photos and route details are a little sparse. The information presented will be accurate to the best of my failing memory. Please feel free to add photos and comments as necessary. Additionally, I will gladly give up ownership of Big Gee and/or Gee Point if someone else desires to build pages for them. 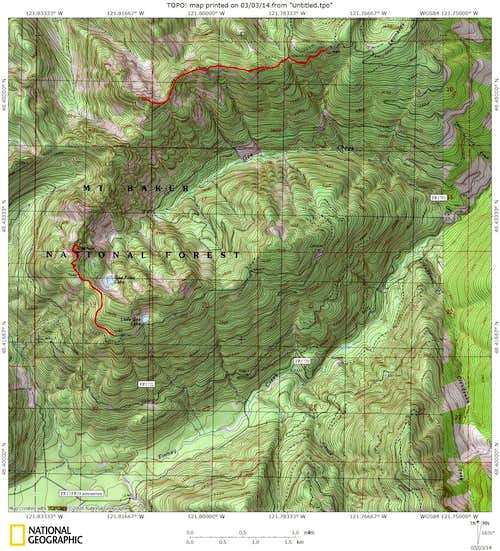 Big Gee/Gee Point route map
Big Gee and Gee Point can be approached from three different directions: 1. From the south (Darrington area) via FR18, 2. From the northwest (Skagit Valley area) via FR17 southeast-bound, and 3. From the northeast (Rockport area) via FR17 southwest-bound. I am not going to give detailed directions for all of these approaches - I am assuming anyone smart enough to navigate off-trail can locate these roads on a map.
FR1705 (for Big Gee) starts 5.4 miles northeast of the intersection of FR17 and FR18. According to my old notes, I followed FR1705 7.2 miles to an elevation of 4100' (I can't remember if I stopped here because of road condition, windfall, etc.). The area where I parked is marked with a quarry on the USGS map.
Note: I have been advised that the condition of FR1705 has deteriorated rapidly in the last few years. Expect a number of water bars, and limited availability of turn-around spots. A high-clearance vehicle (and preferably 4wd) is recommended.
FR1720 (for Gee Point) starts 2.9 miles northeast of the intersection of FR17 and FR18. Follow FR 1720 2.1 miles, then stay right on FR1722. Follow FR1722 5.4 miles to the Gee Point trailhead. The Gee Point trail was at one time FS Trail #612. I'm having a difficult time locating it on the USFS web site, which leads me to believe it may not be 'officially' in service.

For Big Gee, walk the undriveable portion of FR1705, until at a 4050' saddle just east of Point 4600+. From here, plunge into the woods at whatever point looks best for you, and scramble to the top of Point 4600+. There will be a little bit of low-exposure class 3 to get to the top of this point, but it is better to go over the top than going around. From here, you will have a good view of your objective, one mile to the west (actually, this point has surprisingly good views in all directions).

Big Gee from Point 4600+ (one mile east)
It is difficult to tell from the photo, but the most technically demanding part of the scramble is a 4700' point about halfway between Point 4600+ and the summit. I was able to scout around for a class 3 option (possibly a few class 4ish moves) that kept me close to the ridge crest. It is possible to drop off to the left well before you get to this point and come back up in the meadow on the left side of the photo, but this will involve a substantial elevation penalty (if you look at the enlarged photo, you will notice the large, rocky buttress on the left).
For the final scramble to the summit, simply follow the ridge crest, staying to the left (south) side of the ridge in the exposed areas. Total distance to the summit will be 1.5 to 2.0 miles, depending on where you park.
Note: After creating this page, I found this Summitpost page, which has a trip report from Klenke describing a 2004 ascent of Big Gee.
Special thanks to Redwic for the following comments, which make up for the gaps in my memory:
1. There are multiple pinnacles along the ridgetop. At the final pinnacle it might be best to drop down off the north side approximately 50'-60' to bypass below cliffs before heading back up to the ridge for the final summit ascent. Of course, people have done this route using different variations, depending on conditions, experience, and comfort level.

2. Big Gee should never be attempted when wet. There are a lot of steep, exposed areas along the ridgetop which would be very dangerous when wet. 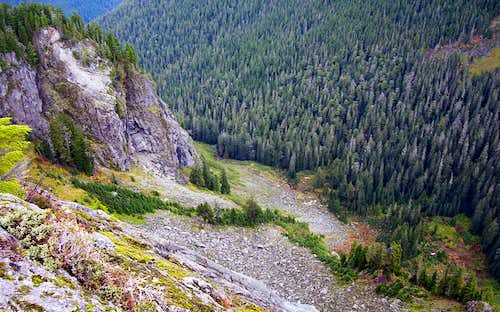 Exposure near summit of Big Gee 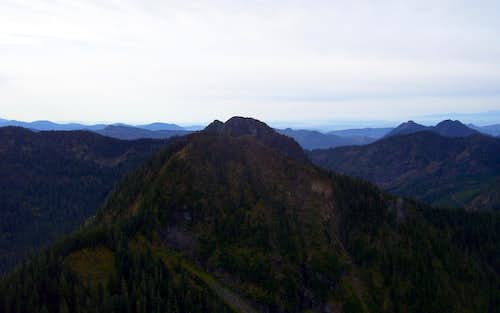 Big Gee south view. Gee Point is the smaller of the two points just left of center. Big Deer and Little Deer are on the right side of the photo.
Views from Big Gee are not too bad, but if it's just the views you're after, you can get the equivalent for less effort at Gee Point. From the Gee Point trailhead, follow an abandoned road for about 0.25 miles, where the trail will turn uphill to the right. The first 0.25 miles of trail are in poor condition, but will improve greatly after this point. Total distance to the summit is 1.5 miles, with 700' of elevation gain. 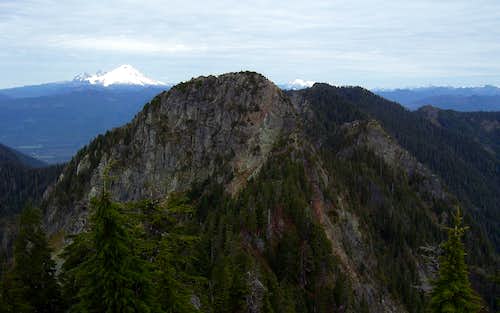 Looking north from Gee Point. Mount Baker and Mount Shuksan in the distance. Big Gee right of center just to the right of Shuksan. 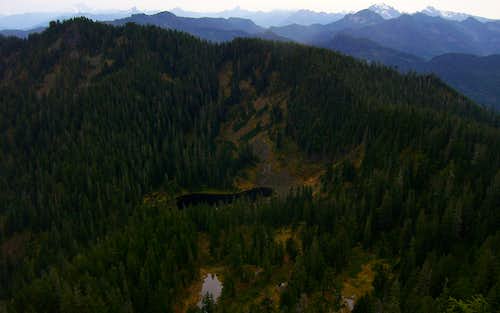 Looking southeast from Gee Point. The summit trail follows the ridge seen to the right of Gee Point Lake.

North Cascades Pano (View Fullsize)
Here are some interesting National Archive photos taken from the Gee Point lookout in 1936 - panoramic photos (1929-1942) from many of the lookouts in the Pacific Northwest can be viewed at this page.

As far as I can tell, a Northwest Forest Pass is not required for the Gee Point trailhead.

Accessing this area will be limited to by the ability to drive to relatively high elevations on FR1705 and FR1722. One could probably get within a reasonable distance from June through November most years.

There are some nice meadows along the Gee Point trail that would probably be suitable for camping.