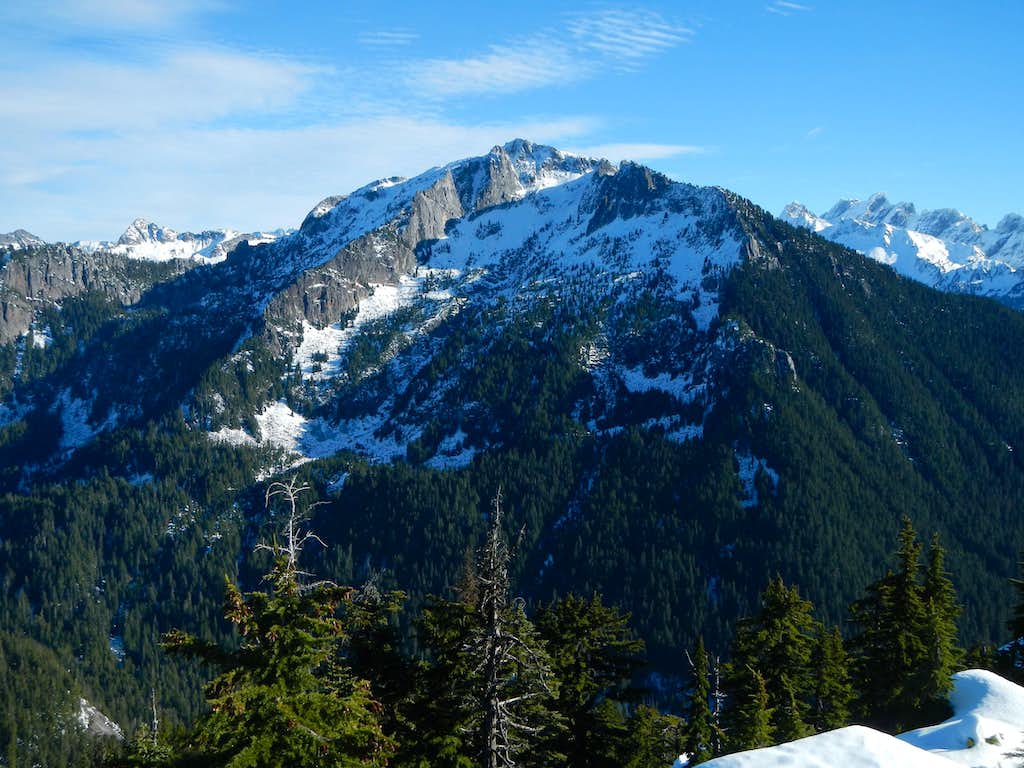 Big Snow West Face
Big Snow Mountain is located in the beautiful Alpine Lakes wilderness. It is a big mountain with notable height, surrounded by beautiful lakes and tarns. Summit views of surrounding peaks like Daniel, Overcoat, Summit Chief, Lemah, Burnt Boot, Thomson  and more are spectacular! The north slope is made up of beautiful glacial scoured granite slab and rock. The slab holds pockets of snow late into the season. Large and small tarns alike sprinkle the whole north slope.  These slabs are one of the main attractive features which inspire local hikers to make the trek.

The east face and east buttress has steep walls that drop down into lower Hardscrabble Lake.  Technical climbing can be found there.  These features are not visible from any road in the area. In fact, the whole peak is quite remote, but it does share a south ridge with Mount Price and a northeast ridge with Wild Goat Peak.  Despite it's remoteness, it is a fairly popular scramble (for those who know the area) but not as popular as the nearby I-90 peaks.  It's likely that the first ascent was made by a group of Mountaineers on July 20, 1917. 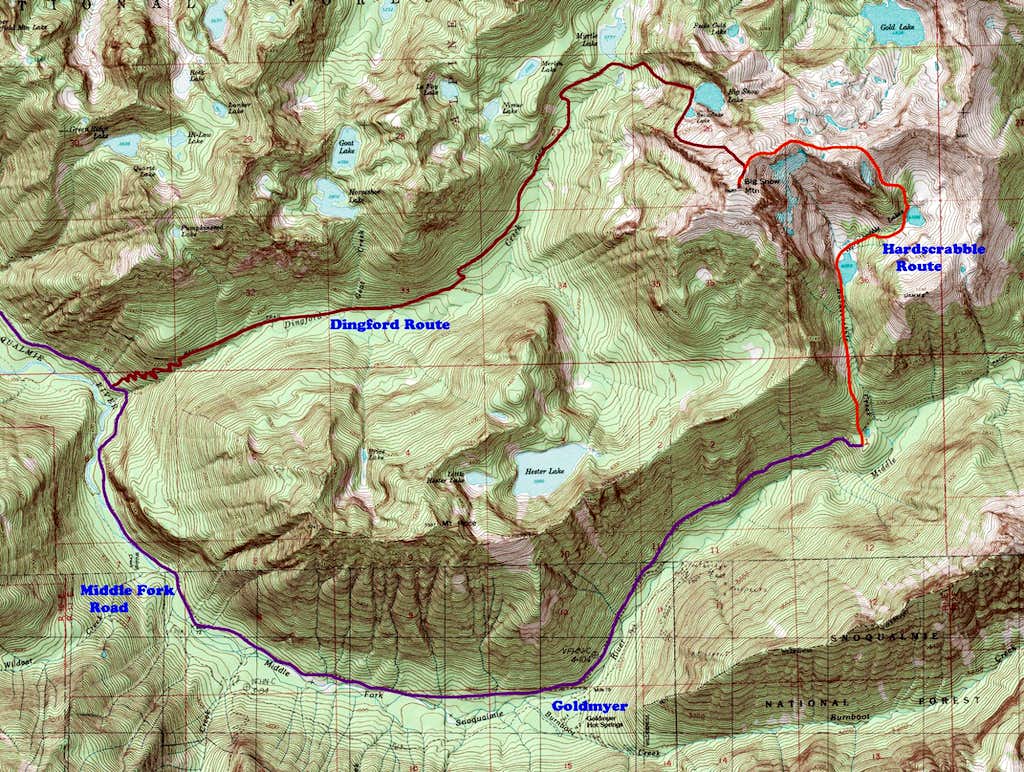 There are two standard approaches for this peak. The east ridge (Hardscrabble route) is easier and less confusing, but the Middle Fork Road has been gated at Dingford Creek so it's now 25 miles round-trip.  The north slope (Dingford route) is less distance but involves serious route finding and bushwhacking depending on snow conditions. 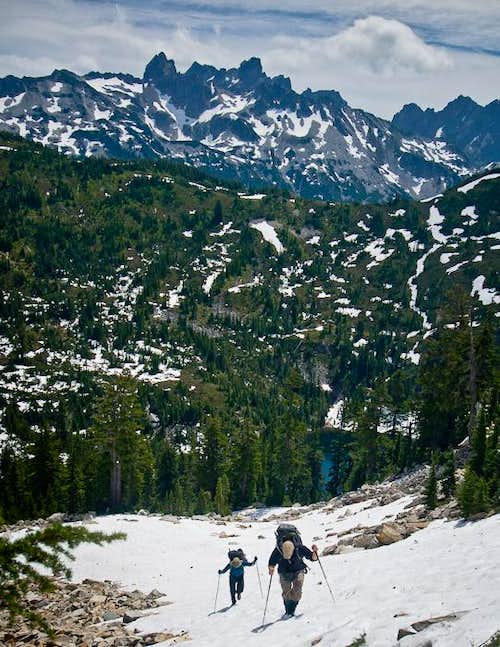 Above Upper Hardscrabble Lake
East ridge / Hardscrabble route: 25 miles total but 8 miles round trip up from the road, 4000+' gain, class 2 scramble with some route finding.   It might be advisable to bring a bike for the road portion.  The trail starts a half mile short of the end of Middle fork road.  This access trail can be found right across the road from a large fallen log.  From the lower lake head east and ascend a climbers path to upper Hardscrabble Lake. Stay on the path, ascending through forest and keeping near the inlet to the lake. If one goes too far to the left you will run into cliff bands. From there, the climb begins up a gully to a col. From the col, drop down onto the open granite slab of the north slope. Follow the east ridge to the summit. This is the preferred route to the summit, and will require an overnight for all except the hardiest of souls. 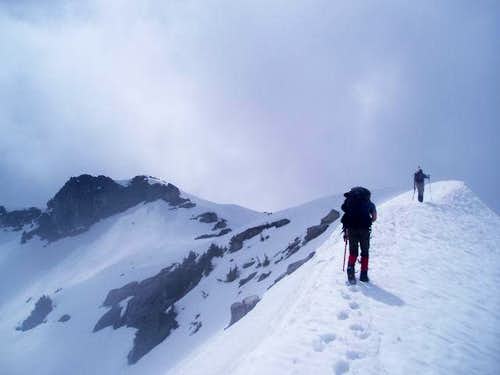 Upper East Ridge
North slope / Dingford route: 12-13 miles round-trip and 5280 feet of gain, class 2-3 with route finding. Approach from Dingford creek trail to Myrtle Lake. Ascend to Big Snow Lake making use of steep gullies. Traverse right around Snowflake Lake, then ascend to the summit. This route is now the shortest, but certainly not easiest to puzzle out.  Failed attempts and running out of time is somewhat common on this route. 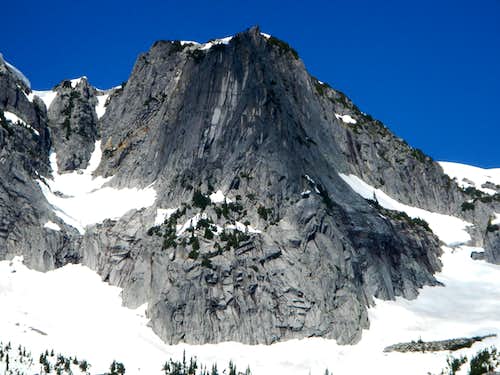 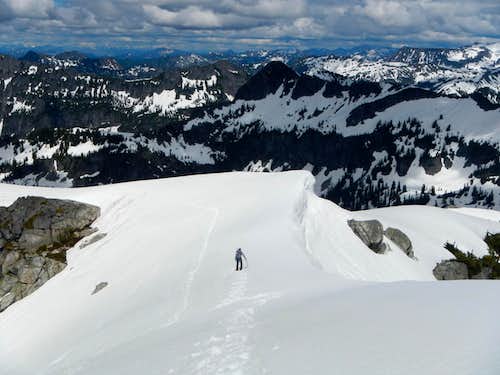 Nearing The Top
From Seattle, take I-90 to exit 34 in North bend. Take 468th Ave for about .6 mile. Turn right on Middle Fork road. At about 1 mile stay to the left at a now closed fork in the road. Continue for another 1.5 or so until the road turns to dirt. This is FS RD 56.  Drive about 10 miles, cross a bridge, and take a right. You will go about 6.5 miles until you come to another gate. This is the Dingford trailhead and gate, the jumping off point for the Myrtle Lake route, and also now the end of the public access road. For the east ridge route, hike or ride bicycle 7 miles further.  Watch for the giant broken log in the road which is right accross from the Hardscrabble Lakes access trail.  This parking area is a half mile from the road's end at Dutch Miller trailhead.

Camping is great at any of the lakes, just keep in mind the impact you are making while camping. A campground is located at the beginning of Middle Fork River road. 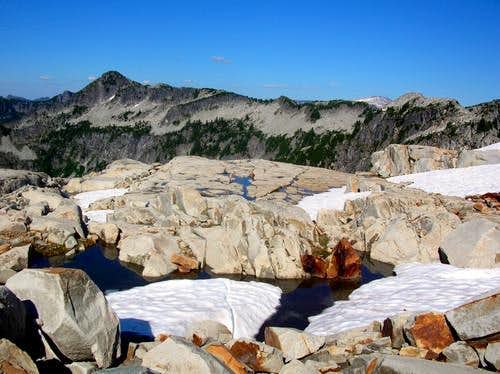 There is no NW Forest Pass required at this trailhead.

Normally climbed late spring to fall. Winter ascents are possible with access being ok for winter. North slope route would make for a good ski run. One must be mindful of avalanche conditions and hazards if climbing during winter.