The bivouac Rossi e Volante belongs to the CAI UGET section of Torino, located in the high northern head of the Val d'Ayas, in a superb high-altitude glacial environment, nestled among the red rocks at the foot of the wide and steep south slide of the Roccia Nera. It rises for 420m from the summit ridge of the Roccia Nera, and 360m above the famous Rifugio Guide d'Ayas at Lambronecca.
The first structure was built in 1963-1964, to remember two members of an expedition in Nepal of CAI Torino, unfortunately overwhelmed by a collapse of ice on the "Langtang Lirung": they were the mountaineers Giorgio Rossi and Cesare Volante. After work took place in 1995, the camp was rebuilt in 1999, and subsequent water infiltration, occurred in more recent times, have led to the closure and restoration. 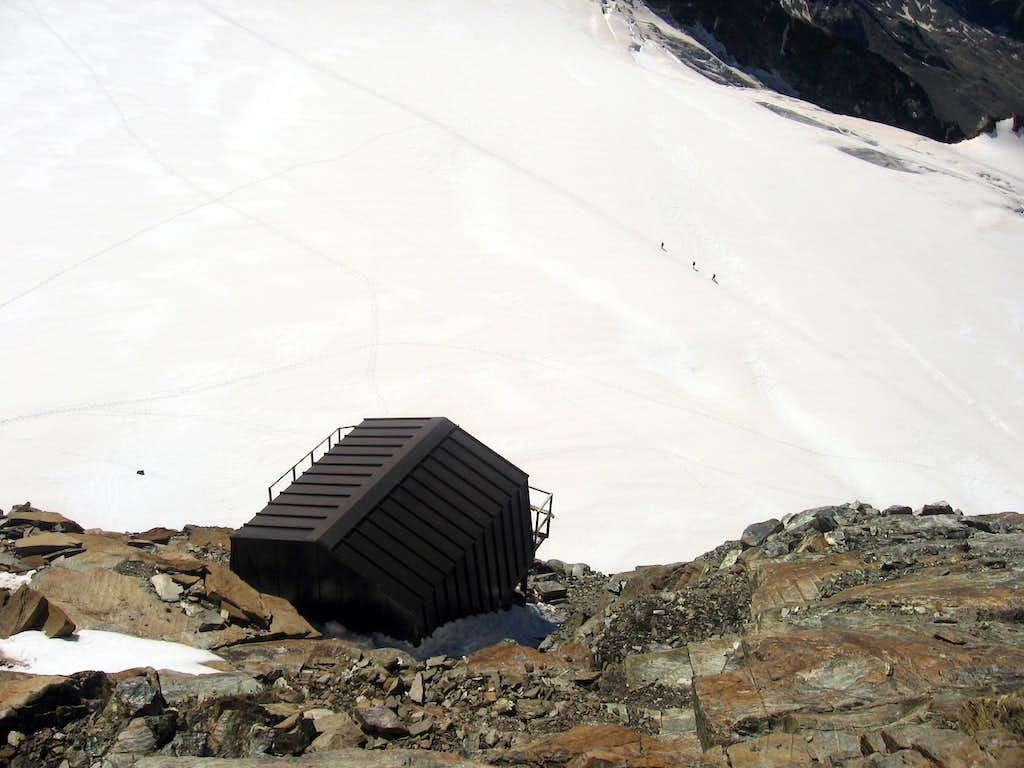 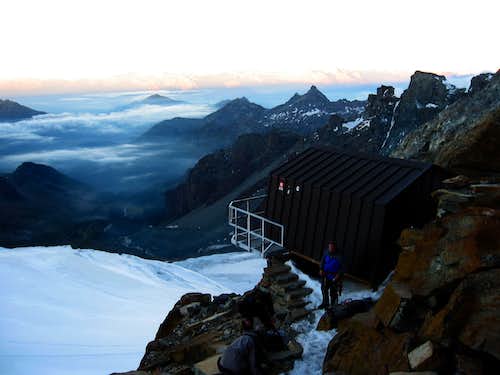 Bivouac Rossi e Volante
The metal plate placed next to the front door proclaims an altitude of 3.700 meters, not confirmed by the GPS. Unguarded, the bivouac is made of wood covered with black sheet metal, which makes it relatively indistinguishable from the surrounding rocks; wide cavity, usually cluttered with debris and occasional mountaineering equipment, located at the base of the structure, in part by lifting from the ground .
The southern facade, wood, shows two small square windows and equipped with reclining cover the sides of the door, topped by a modern ceiling light for outdoor light.
A massive and high steel railing, fitted with ladder and around the eastern and southern sides of the bivouac, facilitating their identification at a distance; setting aside the "traditional" shelters (Teodulo, Guide del Cervino, Mezzalama and Guide d'Ayas), this camp is the foothold highest along the stretch of 4000s on the Italian-Swiss boundary. 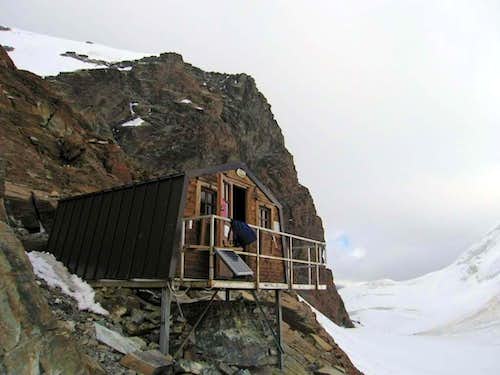 The bivouac, like every bivouacs, should be used only as an emergency shelter. In most cases it is used as a refuge unattended, often mistreated and left full of garbage (the Felice Giordano or Solvay are a clear example). This despite it's placed near two proper refuges. During the summer is almost full of people, often more than the actual capacity. The fee is 10 euros per person.

The Breithorn chain
The ascent can be made from Plateau Rosà 3.400m, served by cable car from Cervinia, via Colle del Breithorn, setting foot on the large balcony Breithorn glacier at the foot of Central and Eastern to the foot of the Roccia nera. The climb involves some large crevasses and same up and down, for more or less 2h'30-3h'00 hours of walking, difficulty with F and drop of about 300 meters from the Rifugio Guide del Cervino. 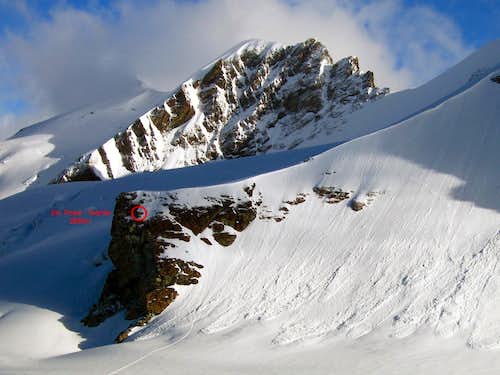 Location of Bivacco Rossi-Volante on the SW spur of Roccia Nera.
The climb is also possible from refuges Mezzalama or Guide d'Ayas; it requires 3h'30 hours and 2h'00 from the first by the second. The difficulty is evaluated in F/F+ with an altitude difference of 740 meters from the Mezzalama and 350 from the Guide d'Ayas.
The ascent involves first of all to deal with the sudden crevasses above the Guide d'Ayas, pointing roughly the wide western wall of the Castore and the Colle di Verra to the foot of the apparent southern ridge of Polluce, about 3.800 meters above sea level . Here it bends sharply to the left (west) for about 900 meters as the crow flies, losing altitude in the presence of the vast hill of the Porta Nera or, which separates Polluce from the Roccia Nera.
A snowy ramp, often icy and slippery, following the massive outcrop of the Roccia Nera; then leads to the first stretch of rocks, pinkish in color, below the bivouac. An old and faded rope hanging among the rocks, without appearing too reliable, the way is still very rich of comfortable grips, even easier if you go with crampons (it is good to be prepared for some small but insidious blade of hardened snow or ice).
The bivy is the starting point for the ascent to: Breithorn Orientale (4.141m), Breithorn Centrale (4.160m), Breithorn Occidentale (4.165m), Roccia Nera (4.075m), Castore (4.226m), Polluce (4.091m), Punta Perazzi (3.906m), Gobba di Rollin (3.899m).