Bjelasica is situated on NE from Podgorica, the capital of Montenegro. Mountain is surrounded by the 5 cities: by Kolasin town on the W, by Mojkovac town on the N, by Berane town on the E, by Bijelo Polje on the NE, by Andrijevica town on the SE.

It's geological features are of volcanic origins, with smooth round shapes, differing from most of Montenegro's other mountains of calcareous composition abounding in karst forms, with numerous crevasses and crevices. Bjelasica lacks alpine climbing rocks but the vast spaciousness of it's mildly rolling landscapes is amazing.

The Mt Bjelasica range stretches over and area of 630 square km, with a equal width & length - 30 km. The entire range divides into four different expanses from the NW to the SE, namely:


The Bjelasica range is bordered by the Lim and Tara rivers as well as by the Ljubovidja and Lepenica rivers to the north. It belongs to the municipal districts of the cities: Kolasin, Mojkovac, Bijelo Polje, Berane and Andrijevica, which cooperate in the common interests of the tourist development of the Mt Bjelasica region. 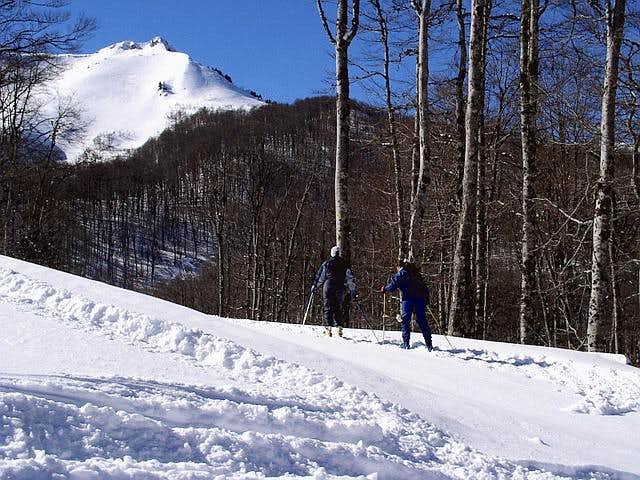 Enjoyment in the beauty of Mt Bjelasica

The massif of Mt Bjelasica has 10 peaks above 2000 m. The three peaks which belong to group of highest peaks are Crna Glava (2139m), Zekova Glava (2117m) and Troglava (2072m), all three placed above the beautiful Pesica Jezero (Pesica Lake, 1820 m). Here is the list of the highest peaks of Bjelasica: 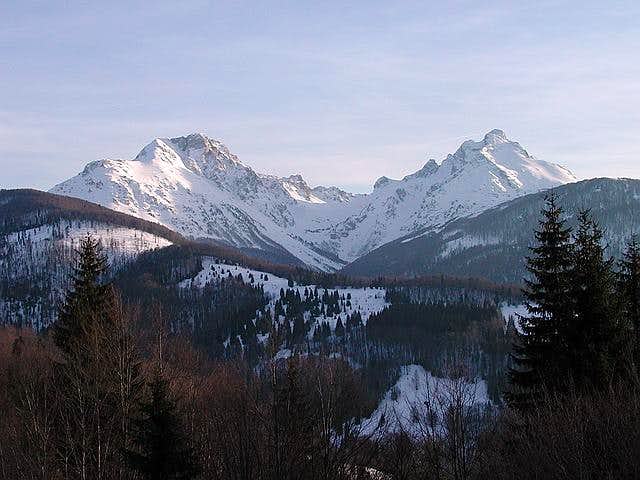 
One part of the marked Montenegrin Climbing Transversal CT-1 goes across Bjelasica. You can hike this part in three days.

Mt Bjelasica is also the home of 6 glacial lakes: 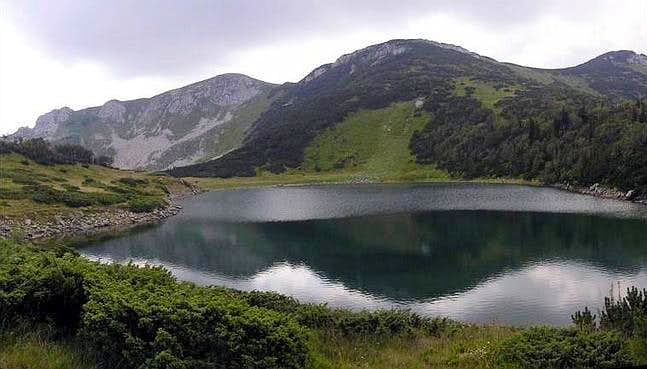 Bjelasica is the greenest mountain in Montenegro, also very rich with water sources. So, Bjelasica is really the pure paradise for enjoyment in beautiful mountain scenery. The mountain is approachable also by car. With the roads from Kolasin town till Vranjak and from Berane town till Kurikuc you can come at the foot of the mountain and also to the Biogradsko Jezero (1094 m) lake.

In the 1872. Montenegrin King Nikola had realized that Biogradska gora (Biograd`s mountain) was the great ecological heritage for the future generations and protected it by the law.

This is the one of the last three jungles in Europe, with the typical jungle vegetation. Nacionalni Park Biogradska Gora (Biogradska Gora National Park) takes 5650 ha of the central part of the Bjelasica Mountain, between the rivers Tara and Lim. In the heart of Biogradska Gora is famous and beautiful Biogradsko Jezero (Biograd's Lake, 1094 m). The 80 percents of this area are the woods. The many trees are over 500 years old. There are 26 plant ecosystems, 86 kinds of trees and over 220 various plants. The one hundred old trees are 40 - 50m high. There are typical mountain trees: the oak, the maple, the beech, the fir, etc. The birds’ observers and ornithologists can enjoy the flights of eagles and 150 other birds. The Biograd`s woods is the home of bears, wolves, dears, foxes, etc. There are over 350 kinds of insects.

The intensive glecier`s activity has formed the various geo - morphologic shapes, like the river valleys and mountain peaks, some over 2000m high. The most famous and the biggest lake in the area is Bigradsko jezero, located in the middle of the park, 1094 m above the sea level. The Biogradska gora is attractive not only for the explorers, but for the numerous visitors, as well.

The park is a natural reserve with a unique geographical and biological structure. It is an open lab for biologists and a favorite destination of hikers and nature lovers. Its immense, centuries old forest with endemic Balkan plant species, diverse animal life and beautiful landscape with mountains, meadows and glacier lakes, will absolutely fascinate you. So, take a deep breath and face the unique nature. 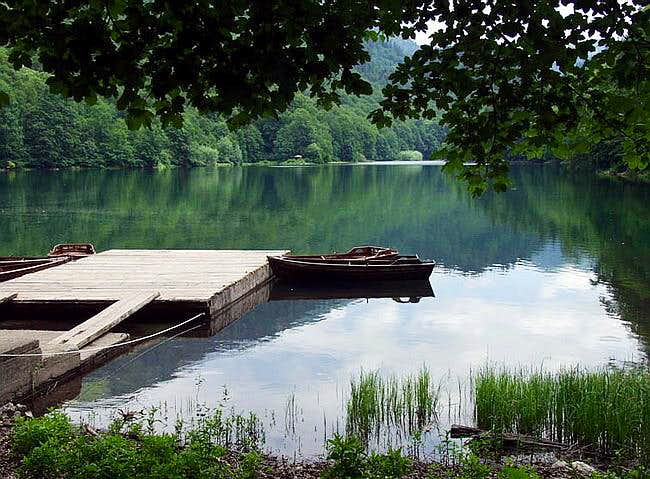 Kolasin (954 m) is the first “true” mountain town that you will arrive to when traveling from the south to the north of Montenegro. It is only an one hour drive from the capital. Moreover, by train from Podgorica you arrive in 45 min. Kolasin and the neighboring village Verusa are favorite destinations of Podgorica inhabitants especially in snowy days. The town’s location is such that it is under the influence of three types of climate at the same time: moderate-continental, mountain and Mediterranean. That is why Kolašin is considered to be an air spa.

Unlike other Montenegrin towns on the north, Kolasin has a solid urban structure. Although it is not a large urban entity, Kolasin has a small promenade with sidewalk cafes, as well as relatively neat and clean streets. The town’s radio station “Ozon” is one of those transmitting the famous Radio Free Europe Program on South Slavic languages. Kolasin is a lovely place for spring and summer vacation. Here, you will enjoy in the beautiful nature of the Tara River valley and the mountains – Bjelasica, Sinjajevina and Komovi. It is also a great place for mountaineering, skiing and snowboarding, while in winter, it is a true Montenegrin 'ski Mecca'.

“Jezerine” at Bjelasica (Kolasin town area) is one of the two greatest Montenegrin ski resorts (first is Durmitor ski centre). It is a great place for recreational skiing. There are shorter trails with ski-lifts for beginners, while the main trail is for good recreational skiers and professionals. There is a double seated cable for this trail. It starts at 1420 m and ends at Cupovi (1830 m) peak. From this last peak a ski-lift will take you to Kljuc (1930 m) peak. All the trails are certified for organizing top quality skiing competitions, as the inclination reaches the value of 60% at some points. You can rent ski equipment at the town central square or at the ski resort. The choice of ski gear might not be wide, so you should go as early as possible.

By plane:
The closest airport is the one in Podgorica (70km away).
If you are planning to come via Serbia, you can use the Belgrade (Beograd) Airport in Beograd (Belgrade) city, capital of Serbia and Montenegro.
Information about flights and tickets on JAT Airways web page.

By train:
Beograd - Bar (Bar - Beograd) railway passes through Mojkovac and Kolasin. In winter, there is a special ski-train for Kolasin from Bar and Podgorica. When you get off it, a ski bus will take you straight to the ski resort.

From Podgorica you can also take the village road for Kolasin. It goes across Lijeva Rijeka, Verusa and Matesevo. One part of it goes along the Tara River, which in this area is like a small, gentle and playful spring. The road is narrow, but in good condition. From the north, you will reach Kolašin if you take the highway that passes through Mojkovac. If you are coming from the east you should go across Andrijevica through Matesevo to arrive to Kolasin. You will be surprised by the difference in the landscape of the northern and the southern access to Kolašin. Unlike the south, the vegetation in the north is more lush, green and soft.

Bjelasica is tipical hiking mountain, climbing without using of hands. The Bjelasica peaks you can climb whole year. If the snow is hard and frozen, bring with you the crampons and ice axe. You will need them on steepy slopes of Bjelasica peaks.

Kolasin town is an ideal place for hiking, as there are numerous hiking trails around it. You can always join the hiking tours organized by local sport societies. Also, you can ask for a guide to lead you on a particular hiking tour of your own choice. Hiking will definitely bring you most pleasure and joy in the warmer part of the year.

Location: Belowe the Mucnica peak, shepherd's hut Kutijavac near shepherd's hut Vrioc.
Configuration: stone-wood building. First floor and mansarda made by wood.
Capacity: 40 people
Conveniences: Full service! The best hut in Bjelasica region! Kitchen with full service, bathroom, electricity, water, bads with full equipment (you don't need sleeping bags), you can buy the food and drinks.
Environment: on SW side of the Bjelasica mountain, view to Tara Canyon, Mt Sinjajevina and Mojkovac town.
Arrival: To Mojkovac by train or bus, then by walk via Rudnica-Przista-Brskovo (7 km by walk - 1.45h). To the hut you can come also with car.
Administrative office: PSD”Dusan Bulatovic-Dzambas” - Mojkovac.
Contact: Ranko Misnic, +381(0) 84 47 32 21, Mobile: +382(0) 69 02 36 97
Note: Before your coming please call these numbers and contact responsible contact people.

Location: on eastern side of Montain near Berane town.
Configuration: stone building.
Capacity: 28 persons (15 beds on the flour, one room for 8 person, one room for 5 person).
Conveniences: electricity, water spring 5 m far from the entrance of the hut, kitchen with heating.
Environment: near the hut exist "katuni" - shepherd's huts which are active during summer.
Arrival: the hut is 20 km far from Berane town. Use the way: Berane - Lubnice - Kurikuce - Suvodo. The hut is near the road.
Contact: Nedic Milutin - Tane (Berane, Polimska 21, tel. +381(0) 87 34 39 6 or Savo Softic (Berane, tel. +382(0) 87 31 01 6
Note: Before your coming please call these numbers and contact responsible contact people.

Location: Bjelasica region called Bojista.
Configuration: building with ground floor (kitchen, dining room) and loft (a room).
Capacity: 20 beds (for the time being you can only sleep on the floor in sleeping bags).
Conveniences: home is not finished yet and for now there is no electricity and water (when it is over it shall have both). Nearby there is spring water.
Environment: beech and spruce forest. Relatively near the home you can find lakes: Sisko, Ursulovacko, Pesica and Biogradsko and the highest points of Bjelasica: Zekova glava and Crna glava.
Arrival: from Mojkovac by the truck road 6,5 km (1,5 hours of walk).
Administrative office: PSD "Brskovo", 84205 Mojkovac
Contact: phone number +382(0) 84 72 25 9
Note: Before your coming please call these numbers and contact responsible contact people.

This map also include all important facts and informations about Mt Bjelasica & Mt Komovi and their's surroundings and also some nice shots of them.

No fees or extra fees for entering the Bjelasica.
No permits needed either.
Usual rules of behaviour for NP's do apply.

Hi Vlado, here http://www.ho-vsetin.com/view.php?cisloclanku=2007041302 is our photos and trip report from skialp in Bjelasica mountains in spring 2007. If you find these photos interesting and attachable to Durmitor page, please, attach them. Best regards, palic