Black bear on the south side... 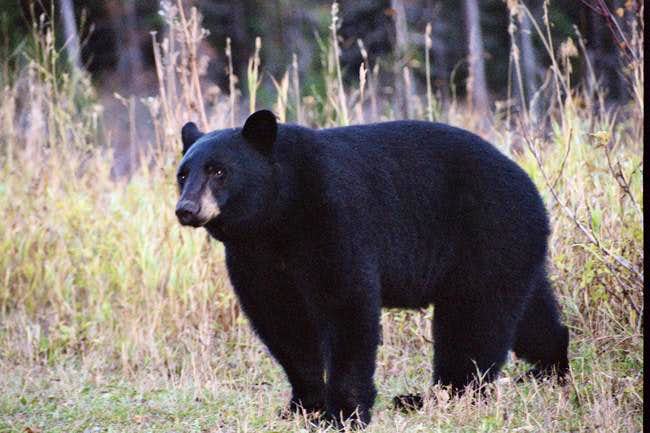 Black bear on the south side of Going-to-the-Sun Mountain (beside Going-to-the-Sun road). This picture can serve as a reminder that all trips into the Glacier backcountry are in the territory of black bears and their bigger cousins. October, 2005.
« PREV NEXT »

Were you as close as it looks? Or were you using a telephoto lens, or zoomed the picture?

I was using a telephoto lense so we were not quite as close as this picture would suggest, however it was still very close. Since he was right next to the road as it wraps around Going-to-the-Sun Mountain we were still in the car when this picture was taken. If we would have run into a bear at this distance on the trail, I would have grabbed the bearspray (instead of the camera) and backed away slowly probably not getting this close-up of a picture. This bear seemed indifferent to slightly annoyed at our presence and I noticed a red tag in its ear, so I wonder if this bear has been a problem before, or maybe the park service (or other associated scientists) are just tracking it? It seems now we should have reported this sighting to the Park Service, but we did not.

Nice bear shot. I encountered one bear while in the park, but none of my pictures were nearly this good.

I love seeing bears in the woodlands. That looks like a very healthy black bear.

Thanks. Compared to other black bears I have seen, this one was large. It also appeared well prepared for the coming winter (took the picture in October).

You can actually distinguish between a bigger bear and a smaller black bear by looking at its ears. If the ears appear to be small and short you are looking at a big bear because it has a large head, the reverse is true as well. Big looking ears equals little bear with a little head.

In the case of this bear I would say he is on the medium to big side.