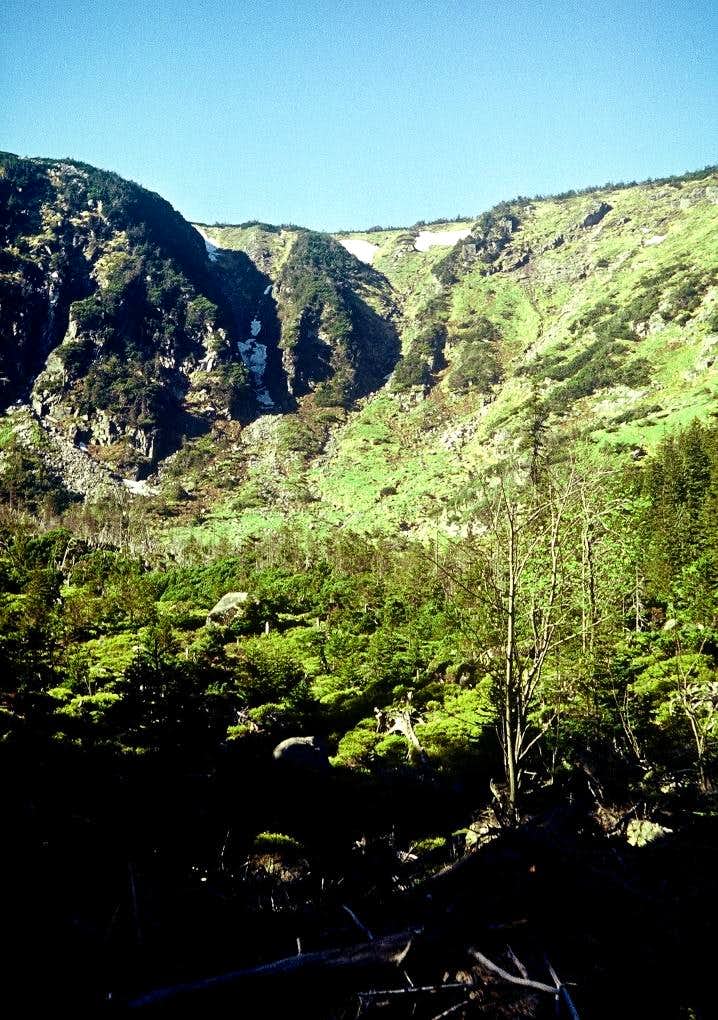 There are a few post-glacial cirques in the Karkonosze, i.e. the Giant Mountains. If you are an American from the East Coast: the Giant Mts are a smaller version of the Presidential Range, the cirques (in Poland the commonest word for a glacial cirque is "kocioł", which literally translates as cauldron) resemble Tuckerman or Huntington Ravines.) Czarny Kocioł Jagniatkowski, i.e. the Black Cauldron of Jagniątków, named after a village that used to be called Agnetendorf before World War II, is one of the most interesting cwms in the Karkonosze. It sits about forty minutes' hike east of the Snowy Cauldrons. At sunrise a lucky hiker can see mouflons (Ovis orientalia) here. My good old luck:) consisted of a ewe with a lamb grazing in the meadow at the trail junction. The wild sheep were brought to the Sudetes Mountains from Corsica over a century ago, for hunting. Photo (scanned slide) taken in the 1970's (or early '80s).
« PREV NEXT »

The world would be an extremely dull & boring
place if everything was ONE color, don't you
agree? ? : ))

Thank you, my exalted cyber-friend from the
East.

I reckon you mean red??? Because as you can see in this pic, Larry, black is NOT ONE color at all - it's actually, let's admit this in black and white: ALL COLORS minus RED, which is great news to MOST of us/US considering our galaxy's gonna disappear in a black hole one day.