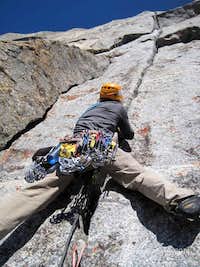 4th Pitch
Charlie Fowler and Jeff Lowe scored two first ascents in 1979 in the Wind River Range on the same trip, Black Elk (5.11-) and Feather Buttress (5.10+R), both located on Warbonnet.  To this day (2014), these two routes are still considered at the top of the food chain in established trad lines for this area. Black Elk is located on the (south) east face of Warbonnet. We climbed the route in full sun in August finishing just after noon. I have climbed Charlie Fowler’s contribution to “Fifty Favorite Climbs: The Ultimate North American Tick List”, Sunlight Buttress, IV, 5.11 in Zion, and can assure you Black Elk is a much better route in my opinion. The multiple connecting crack systems of varying sizes, the gigantic chock stone feature near the top, the setting and camping amongst the wildflowers and streams directly below….this is truly a classic route that should not be missed if in the area. 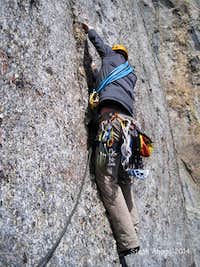 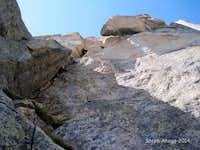 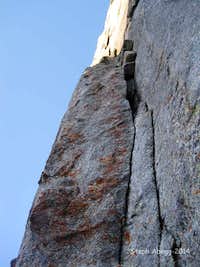 2nd Pitch
Steph Abegg, my partner and photographer for this climb, did an outstanding job on this topo pic displaying the route as well as writing up a detailed trip report on her blog site. The second and third pitches could be combined with a 70m rope, but they are both sustained 5.10 pitches that would require a significant amount of gear for most climbers to feel comfortable making the extension. With a standard double rack, I definitely preferred to keep them separate. The available belay stances in between the two pitches are better than reported. This right facing dihedral making up both pitches offers outstanding climbing. The technical crux of the dihedral might be at the start of the second pitch but the third pitch is more sustained. The fourth pitch is by far the crux pitch of the route and offers the only 5.11 climbing en route. It starts out real mellow and even takes on two roofs at a lesser grade before hitting the C4#4 clean off-width crack that is full on energy absorbing for approximately 30’.  No heel-toe, no chicken wing, no fist, little to any arm bars. It is mostly off-fists with slick footing making it difficult to re-set. The fifth pitch is a joy in comparison following up discontinuous finger and hand cracks as they trend right to a sloping ramp. The sixth pitch has the only real slab move of the climb which is right off the deck around the exposed arête to reach another fun finger crack. This is the pitch that runs underneath possibly the largest chock stone located on a climbing route in the lower 48 (size of a building). The seventh and eight pitches can be combined with a 70m rope through some fun, slightly overhanging, off-width to easy crack climbing to the shoulder below the top of the wall. Easy scrambling leads to the top of the wall and/or summit.

We found an incredible camp site located right at the base of the gully that leads to the start of the climb. There is a relatively large flat meadow located by a well running stream (August) next to the massive boulder field. This site as well as the start of the approach is located almost dead center between Arrowhead and North Lakes. Stay right as you ascend the slope below the wall to reach the second ramp ascending to the right to the base of the upper wall. Take this ramp right and up to a small lichen covered pinnacle at the top of the ramp. Rope up here and climb the pinnacle to the next ledge up and cut back left up the obvious ramp to the base of the tall dihedral that makes up the second and third pitches.

1st Pitch- 150’- 5.8/ This is more of an approach pitch. Rope up at the base of a chossy pedestal and climb it to the large ledge above (rap tat in 2014). Climb the left leaning ramp to the base of the right facing dihedral.

2nd Pitch- 110’- 5.10-/ The awkward start off the belay was the crux of the pitch. From there, fun and sustained hands and fingers up the dihedral lead you to a variety of belay options. I passed a slung rap before I belayed below a slight clean overhung section. I have seen complaints of hanging belays but there were a variety of belay stances available. It would take a significant rack to combine both pitches as they are both sustained at the grade. You can retreat from these first three pitches relatively easily with a single 70m rope. There are anchors built out left and on the route.

3rd Pitch- 100’- 5.10/ The corner crack gets wider as you climb through a slight arching overhang. Stemming alleviates the cruxes fairly quickly. There is a single bolt at top of this dihedral, but for time's sake it is best to go ahead and set up the belay along the narrow ledge to the left at the base of the splitter next to another right facing corner.

4th Pitch- 165’- 5.11-/ This is by far the crux pitch of the route not to mention most of the established routes in the Wind River Range. In typical Charlie Fowler fashion, the crux is a bit sandbagged for 5.11- (and he originally had it at 5.10+ I believe, but that was 1979). The first half is fun 5.9-5.10 climbing up the easy splitter and through two roofs. The crack between the roofs takes mostly C4 #3’s and #4’s. The second roof protects with #3’s and from there on it is mostly a clean #4 splitter for about 30’. This is a tough off-width size for most (#5’s and #6’s are typically much easier) requiring off fists that are hard to re-set due to foot slippage.  On sandstone, there would have been better traction, perhaps the grainite is a bit polished here.   After this crux, it lightens way up. Good belay stances are few and far between however. I had two C4 #4’s. If I did it again, I would take four and I climb quite a bit of desert off-width. With the gear I had, I split the pitch up via a hanging belay.

5th Pitch- 150’- 5.10/ This is a fun pitch up discontinuous cracks that trend and/or traverse right. The final crack is a finger crack that leads to a sloping ledge up and right. Belay at the end of this ledge below a finger splitter. The gear for the belay is so-so until you reach around the arête to find a solid, but hidden, C4#.5 pocket.

6th Pitch- 150’- 5.9/ Place a directional on that #.5 to keep a potential fall off the ledge and make the crux (slab) move of the pitch off the deck to enter the finger crack (takes small gear). Climb this splitter to easy ground that leads underneath the largest chock stone you will ever climb under. Belay up and left at the base of a dirty right facing corner. This is a great lunch spot.

7th-8th Pitches- 220’- 5.10-/ I combined these last two pitches. This last bit climbed way better than it looked. Move up and right into the slightly overhung off-width. The wide crack takes plenty of gear. Do a 180 at the top to transition out of it into easier crack climbing. Follow the wall to the right of the large chock stone until it makes sense to switch to the left side to finish up onto a shoulder of Warbonnet’s upper reaches. Un-rope and scramble to the top of the wall. The summit is several hundred feet further up to your right. The descent is down across a gully to your left.

Once you scramble to the top of the wall (not the summit), descend into a gully to your left and cross over to the next ridge line. Traverse right as you descend this ridge to locate a climbers trail in scree. Cross back left over an intermediate ridge line and continue to descend to the right of the main ridge on mostly scree down to the col between Warbonnet and Sundance Pinnacle. Descend left through the slot down steep scree to the large boulder field below. Traversing left across the large boulders back to near the approach ramp and soft ground to descend on, worked well and quick for me.

Retreat is easy with a 70m rope from the top of pitch 3 via existing tat (2014 to the left of the dihedral). After that there is a variety of fixed gear, i.e. a large hex on the crux pitch that can be used to help with a retreat on a single line. Once you climb pitch 5, retreat is going to cost you some gear.

60m or 70m rope. As I alluded to regarding the crux pitch, if I climbed this route again, I would take four C4 #4’s, but you can get by reasonably with 2 if you are willing to break that pitch up. Single from Metolius #00 to C4#4; Doubles from C4#.3 to #3 and four #4's. A few off-set cams or a small rack of nuts are helpful on several of the pitches. I did not see the need for an extra hand piece as some recommend. I would put a much bigger premium on hauling extra 4’s. If you are climbing Feather Buttress on the other side of Warbonnet and are bringing a #5 for its off-width pitch, it would work on the crux pitch in place of a #4 no worries.