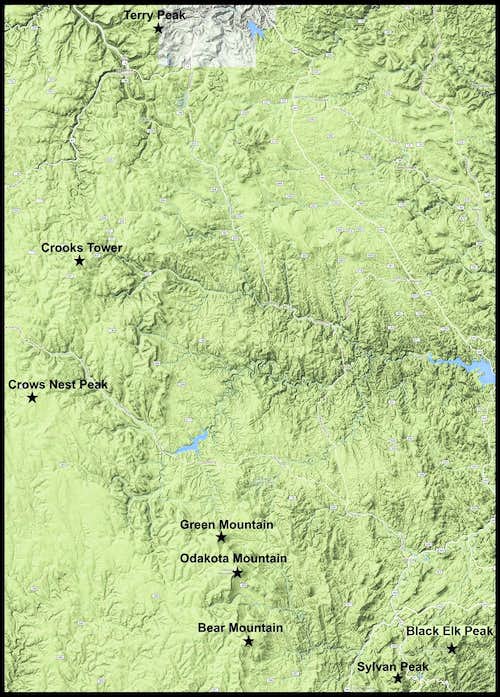 No one seems to know who originally coined the term “Black Hills 7000 Club”. It’s not a term that is used frequently in the Black Hills area, but it does get used by at least some of the local hikers. The term generally refers to the eight named summits in the Black Hills that are at least 7,000 feet in elevation. The eight named Black Hills summits 7,000 feet or higher include Black Elk Peak at 7,242 feet, Odakota Mountain at 7,210 feet, Bear Mountain at 7,166 feet, Green Mountain at 7,164 feet, Crooks Tower at 7,137 feet, Terry Peak at 7,064 feet, Crow’s Nest Peak at 7,048 feet and Sylvan Peak at 7,000 feet. To be part of the club, a hiker must reach the summits of all these peaks. This would seem to be simple enough, since there are only eight peaks. 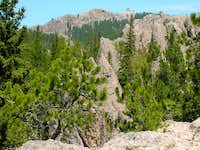 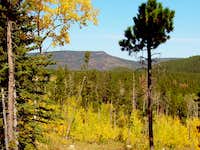 Controversy does not seem to overlook even small things, though. Not everyone can agree on the inclusion of all eight of those peaks. Take, for example, the Hiking the Black Hills website, which lists only seven summits for their 7000 Club. For whatever reason, Green Mountain is left out. Perhaps this omission was based on the fact that Green Mountain is unranked because of only 214 feet of prominence – thanks to its close proximity to Odakota Mountain. Of course, this raises the question as to why Crow’s Nest Peak, also unranked, was included. Some hikers feel any unranked summit should not be included as part of the 7000 club. Probably the only thing that is agreed on is the inclusion of the six ranked summits. For the purposes of this article, all eight summits will be discussed here. The readers can make their own decisions which peaks merit inclusion in the group. 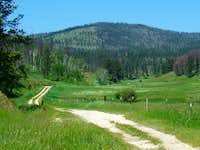 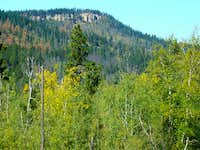 Perhaps it only muddies the waters even more to mention that it has been suggested at least several times that a grouping of the Black Hills highest summits should be based on a 2,000-meter criteria, rather than 7,000 feet. Such a group would add important summits like the Little Devils Tower, Custer Peak, Medicine Mountain, Hat Mountain, Cement Ridge (Wyoming), several of the spires of Cathedral Spires, in addition to the lesser named summits. All of this would expand the group to at least 30 named summits over 2,000 meters. But again, this approach would almost certainly generate controversy in regards to numbered individual spires of the Cathedral Spires, plus the introduction of a second Green Mountain (6,580 feet/2,006 meters) into the 2,000-meter group. Another thing that would differ if the criteria were set at 2,000 meters would be that the newer and larger group would have some private property obstacles that the 7,000-foot group does not have now. Each of the 7,000-foot summits currently has a route that is publicly accessible. Perhaps it is just as well that no one has seriously pursued developing a 2,000-meter group. 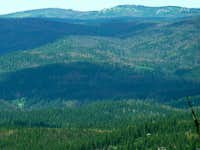 Curiously, even though there are no more than eight peaks that could be included in the Black Hills 7000 Club, it seems relatively few hikers ever summit all eight mountains. Perhaps this is because there is not nearly the same level of distinction as making it to the summits of the 53 Colorado Fourteeners (which are also twice as high!), or even the Adirondack 46, who though lower in altitude are still more numerous. Nevertheless, it is a regional distinction that should prove to be a worthwhile goal for any hiker desiring to complete all summits of this select group. The Rapid City Journal ran articles in July of 2013 about four hikers that reached all eight named 7,000-foot Black Hills summits in one day. This is possible because only two of the peaks, Black Elk Peak and Sylvan Peak, require extensive hiking to reach the summits. The other six mountains generally have roads open that will legally take hikers to within one mile or less from the summits. Whether any other hikers have duplicated the feat of these four hikers is unknown. It is an interesting read and can be accessed online by clicking on this link: Four Guys, Eight Peaks, 24 Hours SummitPost currently has pages for seven of the eight 7,000-foot Black Hills summits. Climber’s logs can be signed there. In addition, the comments section on this page could be a good place for hikers to leave a brief summary of their progress in reaching all these summits. 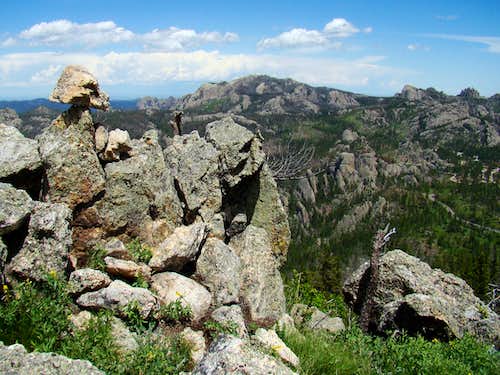 Only Black Elk Peak and Sylvan Peak require serious hikes to reach their summits. When the forest roads are open, one can drive to within a few hundred feet of the summits on Bear Mountain, Crooks Tower, Terry Peak and Crow’s Nest Peak. The shortest route to the summit of Odakota Mountain is just a half-mile one-way. 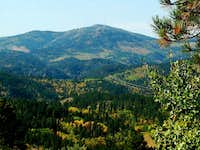 And the shortest legal route to the summit of Green Mountain is a little less than one mile one-way. However, it is helpful to note here that the situation is not necessarily as mundane as it might sound. For the most part, accessing these summits by forest roads can often be an enjoyable experience. 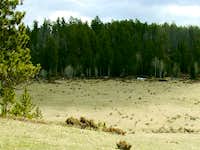 There is a beautiful old forest road that has long served as a hiking trail to the Bear Mountain summit, making for 5 miles total hiking with 1,000 feet of elevation gain. On Crooks Tower, there is a 4.5-mile route following an old forest road that is mostly shady and scenic, all with a gain of 800 feet in elevation. Green Mountain has a .9-mile scenic route on a snowmobile trail that will gain around 150 feet to the summit. Terry Peak is mostly private property, but has the 3.3-mile Terry Peak Summit Road on which the public can hike to the summit with 880 feet of elevation gain, and normally with little traffic on the scenic road. The summit of Crow’s Nest Peak is around one mile east of Boles Canyon Road, by way of old forest roads. This very remote peak might be the most difficult to find the true summit, and may be why it is probably the least-visited. To reach the summit of Odakota Mountain, one must bushwhack .5 mile from Long Draw Road across a meadow to the highpoint on the eastern face of the mountain. While useful anywhere, a good GPS unit would be especially helpful on Odakota Mountain, Crow’s Nest Peak and Green Mountain if you are doing anything more than just sight-seeing. Sylvan Peak is probably the most difficult hike of the whole group. One must bushwhack to the summit up very steep and rugged terrain without the benefit of any kind of markers. Deadfall on the mountain is thick in many places, complicating the 1.5-mile ascent to the summit. Unique from the rest, Black Elk Peak offers a variety of trail route options. One-way trail distances range from 3.6 miles to over 9 miles, and the elevation gains from trailheads to the summit can range from 1,000 feet to over 2,000 feet. Unlike all the other 7,000-foot summits, hiking traffic can be heavy on Black Elk Peak, especially on Trail # 9 South during warm weather months.

Do summit roads depreciate the value of bagging a peak? 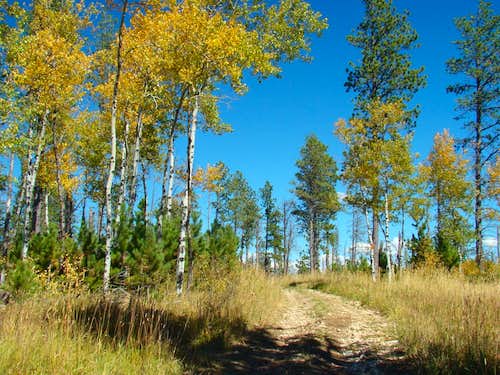 Most of my hiking friends prefer trails over roads or bushwhacking. However, I do have one friend that thinks any hike that is not a bushwhack is somehow an “inferior” event. Some hikers find roads to summits to be distasteful. In some cases, I would agree. But, roads to summits in the Black Hills are a fact of life. They are the leftovers from the days of numerous fire lookout towers, extensive logging and mining operations. The oldest of those roads are only faint traces through the forests now, covered with growth and fallen trees. 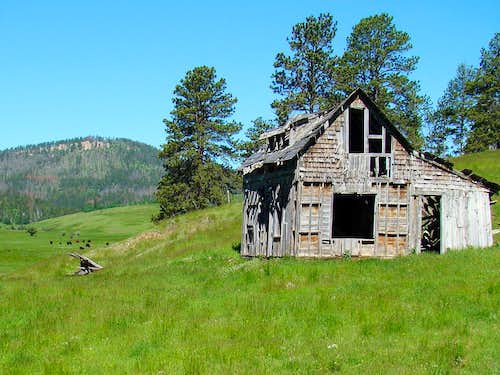 Others have been widened and smoothed for better access to current concerns. The road to the Bear Mountain Fire Lookout Tower would be a good example of this. Given the extensive problems with pine beetle infestation, forest fire damage and deadfall, the older and non-maintained roads can sometimes be useful in providing a defined and less-obstructed route to a summit. When Winter Storm Atlas hit the Black Hills in 2013, the problems already caused by beetle kill and past forest fires were greatly amplified. Bushwhacking the many peaks without any access roads became much more complicated. Considering the risks for additional forest fire damage and the need for fire control, summit roads are not necessarily all bad. Yes, we would all love to have an extensive network of well-maintained hiking trails that included all important summits. However, as my wife would say, “a travel down an old road may just be a trip into yesteryear.”

Here is a list of people who have logged climbs of some of the SD 7ers on LOJ. A few have climbed 7, but none have climbed all 8 of the ranked plus named ones.

Re: Lists of John link

Thanks for sharing the link. In April, 2015, I went out to Crows Nest Peak to complete the final "7000 club" peak on my list. Unfortunately, I got stuck in the snow driving off Boles Canyon Road onto FSR377.1E and wound up spending all my time digging out. Obviously it was not a good choice for a time to explore there. One of these days I hope to get back and complete this group.

Alone on the peaks

Sylvan peak was tough to do in the dark...
Lots of deer on the way up on Black Elk and mountain goats on Little Devil.
I bushwacked up on Green Mountain which is not to recommend because of all the fallen trees.