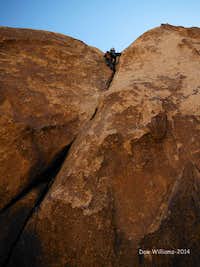 Corral Wall offers some of the better crack lines that can be reached from the Indian Cove campground. Directly south of Corral Wall are two smaller climbing objectives named Ponderosa Wall and Black Tower. Several routes on these walls make for good additions when climbing the routes at Corral Wall. The bushwhacking from Corral Wall to Ponderosa Wall is intense, but short lived. Both objectives (Ponderosa and Black Tower) receive more mid-day sun in the winter than is alluded to in Miramontes guide book. This is a very quiet area that you are likely to have to yourselves no matter the time of day or week. 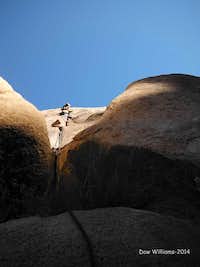 Coyote Crack is a stunning, but short, slanting hand crack that faces north. As you meander over the large boulders from Ponderosa Wall, it is the first obvious route you see on the Black Tower. It is a bit of a scramble to reach its base and is the best route to start on (unless you want to climb the bolted 5.11d (Black Like Night) which you pass under along the way). The crux is off the deck and then it is fairly tame up to the top of the tower. All the routes can rap off of the fixed chains above Blazing Saddles (5.10a) to the far right. Doc Holiday (5.10a) is a mixed moderate worth doing on the southwest face. You climb the obvious crack to its end and then slab climb past one bolt to the top. The 5.10 is on the slab portion. Blazing Saddles is really a sport climb (four bolts) although not listed as same in Miramontes guide. Black Like Night is actually on a separate feature to the north. These routes were all put in during the 90’s.

Park at the Rattlesnake Canyon trail head. Enter the main wash and turn right up what they call Middle Canyon before being forced to turn left and scramble up the white washed stone into Rattlesnake Canyon proper. Boulder hop up to Corral Wall. Hike along Corral Wall until you can turn left and head south through the dense bush following a climbers trail. Boulder hop up to the west facing wall of Ponderosa. Black Tower is just a few more meters south but is a bit of a scramble/boulder hop to reach. Coyote starts above a leaning slab. There is a narrow slot chimney that connects the base of Coyote to Doc Holiday.

Coyote Crack- 5.9*/ Cool and fun obvious arching crack, but too short. The crux is prob the move off the deck but it protects well. Can move between Coyote and Doc Holiday via a cool slot chimney. Dow

Doc Holiday- 5.10a*/ The crack is easy going, but the slab moves from the top of the crack to the rap chains on Blazing Saddles are full on Jtree 5.10 slab via delicate footwork and small to zero crimps. Dow

Black Like Night- 5.11d*/(Sport climb) (on separate feature just to the north of the tower)