The highest point in its vicinity, Black VABM is not a challenging peak or an awe-inspiring one, but a trip up it is worth it for the expansive views, the remoteness, and the colorful bentonite badlands one passes through, around, and over on the way there.
Easiest access is from the Bentonite Hills section of the Hartnet Road. Although the peak is not in the Bentonite Hills-- its slopes actually turn from chossy badlands to being littered with volcanic rock-- and not in Cathedral Valley, either, it makes sense to include it as a child to the Cathedral Valley page since it is located between the two main backcountry roads making up the Cathedral Valley loop drive.
From the summit, views include the following: North and South Caineville Reef, South Caineville Mesa, the Henry Mountains, the Waterpocket Fold in Capitol Reef, and the high-desert plateau called the Hartnet. 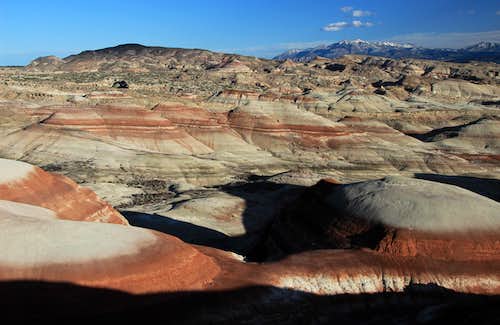 There are several ways to approach the peak. I am only going to describe the simplest.
2.7 miles east of the Capitol Reef NP boundary, turn off Utah 24 onto a dirt road that reaches the Fremont River in less than half a mile. Look for a "River Ford" sign. You need high clearance for this crossing, and you should always check the water levels first. This road, Hartnet Road, leads about 33 miles to Cathedral Valley Junction in Upper Cathedral Valley, passing several scenic overlooks along the way.
Hate me if you want for this, but I did not note the exact driving distance to where I parked. It was around 10 miles. The two pictures below show the prominent outcrop by which I parked in a pullout, and the peak is easily seen while driving to the pullout, so there really is no excuse for not spotting the peak and finding a place to pull off from which you begin your cross-country trek. 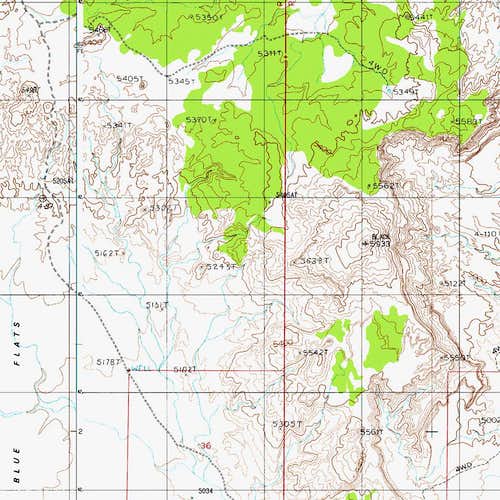 Map with Black VABM
Depending on where you park, the distance and elevation gain will vary. From my starting point by the outcrop shown in the previous section, the route was about 2.5 miles with around 1000' of elevation gain in all.
My route was Class 2 all the way. After traversing the badlands for a bit, I descended to flat ground and then started finding my way cross-country. Minimizing the ups and downs as much as possible made the route a little longer than a direct line would have been.
At one point, approximately halfway to the peak, I did cross a 4wd road. I have not found this road on any maps and do not know where it begins or ends, and I do not know what the driving conditions are like. 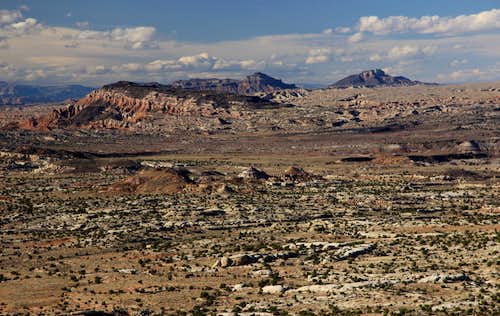 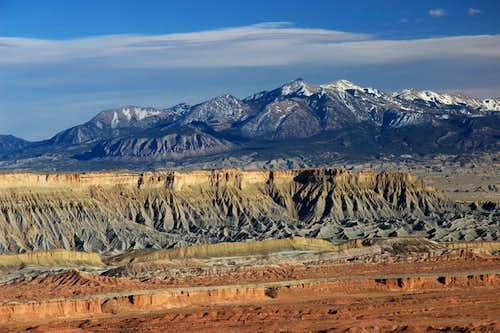 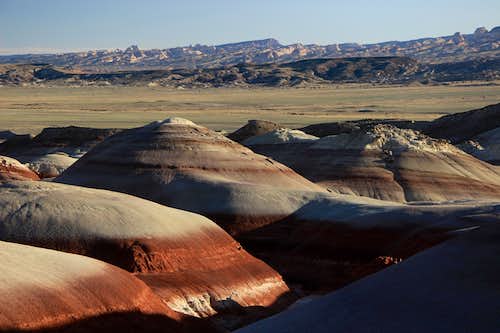 Keep your vehicle on existing roads. Stay off the roads and the badlands in wet conditions unless you like getting stuck.

Spring, fall, and winter. Summers are very hot and there is no shade. If you must climb in the summer, go out either very early or very late in the day and have plenty of water.

Dispersed camping is possible just about everywhere out here. There are primitive sites about an hour up the road at the Cathedral Valley Campground, which may require a fee.