Blackmon Peak is located in the heart of the White Clouds Mountains in central Idaho. 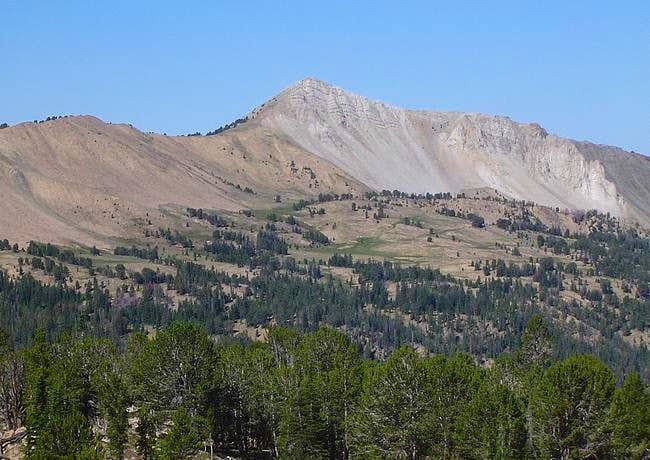 Although nowhere near as rugged or impressive as its neighboring White Cloud Peaks, Blackmon Peak (formerly known as Blackman Peak) is still worthy goal for climbers and can be combined with a traverse to many other peaks in the area. Its slopes are tree covered on all aspects to within a few hundred feet of the summit where the terrain turns to the white rock, which is the White Cloud's signature characteristic.

The peak is named for George Z. Blackmon who began mining in the area around 1875. Remains of these mines can still be found in the area and should be left alone. The USGS Quad map shows an elevation of 10300', but a benchmark on the summit lists a slighly higher 10307'.

If you're looking for an introduction to the White Clouds that is both low risk and low effort, then Blackmon Peak is the perfect choice. It has the best bang-for-the-buck in views in the entire range. The summit is a prime vantage point for taking in views of David O. Lee Peak and the rest of the northern White Clouds. The intriguing Antz Basin sits at the foot of the peak, and there are good views of Patterson Peak and Castle Peak to the east. Fourth of July Peak stands to the southeast, with evidence of the 2005 forest fire all around it. To access the Southwest and East Ridge Routes of Blackmon Peak from Ketchum, Idaho, drive north on Idaho 75 for roughly 45 miles up and over Galena Summit until reaching the well marked 4th of July Creek Road that leaves the highway leading to the east.

Follow this improved (but washboarded) dirt road 10 long miles to the foot of the White Clouds at the 4th of July Lake Trailhead. From here its only around 1.5 miles and 1500' feet of gain to the summit via the Southwest ridge.

No permits required or red tape.

4th of July Road is closed during winter past 1.5 miles. Please be cautious on this road as there are many blind corners that have recently caused a few head-on collisions.

A snow free climb is possible most years from July until the snow flies in early October.

Access issues would make a winter ascent of Blackmon Peak quite difficult. View of Blackmon from the trailhead.

There is ample space for camping at the 4th of July Lake Trailhead complete with an outhouse and all.

If wishing to camp at 4th of July Lake, there is also an easy route to the summit from this beautiful little lake.

In the summer of 2005, a large wildfire scorched a great deal of terrain on and around Blackmon Peak. Expect hazardous conditions that are associated with wildfire activity in the area for years to come.

The White Cloud Peaks are remote and isolated from any towns, weather observations, or major roadways.