Seized by wanderlust one afternoon in July 1999, I left camp and ended up atop one of the Kearsarge Pinnacles. What I saw and felt there changed me forever, and I left the Sierra Nevada that summer a climber, no longer a hiker. My love of the Rockies kept me out of the High Sierra until 2005, when I decided I had to go back and tackle a few notable summits. How I envy those of you who live closer and can explore the lesser-known gems of the Range of Light!

It had been six years since I had been in the High Sierra, and I’d forgotten how magnificent the rock is there. There is so much of it, and it’s so sheer, with such awesome cracks. I chose three summits, all because they are prominent and easily done as day trips, but for other reasons as well. Cathedral Peak--- it offers great free solo opportunities and is just one of the most striking peaks anywhere in the country. Mount Conness—the highest Yosemite peak north of Tioga Pass. Mount Dana--- Yosemite’s second-highest, highest attainable in a day, and offering a good snow climb as an alternative to the popular standard route.

I climbed the peaks in ascending order by height and on consecutive days. 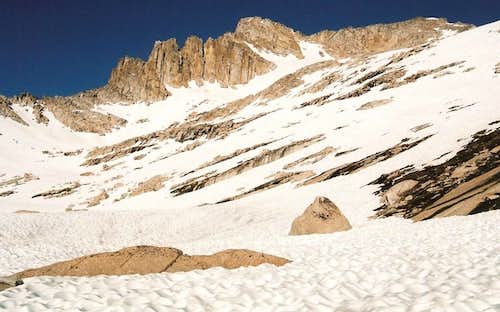 There was still a lot of snow in the mountains, which is what made this ascent harder than it needed to be, but that also made it more fun.

I had no trouble finding and following the trail into the basin at the base of the ascent, and all I can really say about it is that the views got nicer as I went, there was a lot of clear running water, and I kept moving so the legion mosquitoes didn’t have a chance to land on me.

Things got a little vague when the trail ended and I had to find a way up the benches to the ridges above. There were occasional cairns, but if there was an organized system to them, I missed it. But with a map and the ability to read it, though, it was just a matter of finding a route that worked.

All the snow meant more obstacles to cross or avoid--- snowbanks of questionable stability and mercurial depth, seemingly endless cascades whose beauty compensated for the backtracking and tricky maneuvering they sometimes caused, and wet, slippery rock. There also was a copious amount of marmot droppings about, and I got a handful once. You can bet I appreciated all the water around then. 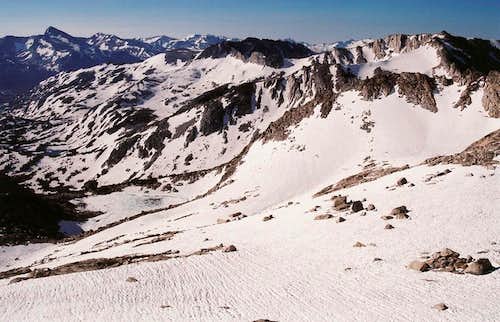 It was my intent to ascend via the east ridge, but I found myself angling more toward Alpine Lake as I found what seemed to be the safest way up the benches. Later, from higher up, I would be able to identify the way I had wanted and aim for it on my descent. Eventually, I found myself on some cliffs that suddenly yielded a view of still-frozen Alpine Lake a couple hundred feet below me. Rather than descend to the lake only to climb the talus at its other end, I stuck to the cliffs for some fun Class 3-4 scrambling and moves until I reached the basin above the lake and below Conness's east ridge. I recommend this route to anyone who likes a little extra fun and challenge. There is occasional mild exposure, but nothing scary, and you get to use your hands a lot.

The basin was full of snow--- sometimes it was hard enough to walk on while making almost no impression, and at other times I sank. Compounding the footing troubles were the snow cups all over the place. I was glad I brought my ice axe--- I hadn't expected to need it but thought I should be prepared--- because it was a great aid as I ascended steep snow slopes from the basin to the east ridge, where there are great views north and south. 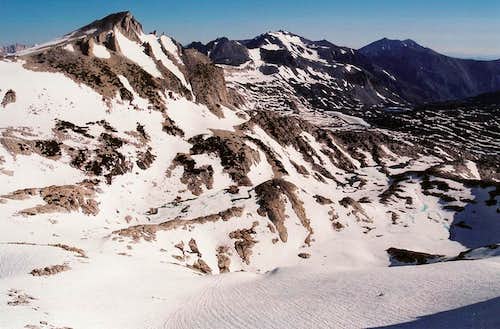 From the east ridge, there was some Class 2+ climbing on broken but mostly good rock to the summit plateau; I thought this was the most physically taxing part of the climb. From the plateau, the summit loomed nearby, and it took maybe 15 minutes to reach. It is supposed to be an easy Class 3 scramble, but I don't see how it's even that. I used my hands maybe three times and probably didn't NEED to use them at all.

The views were spectacular, and they included the Tuolumne Meadows area, Cathedral Peak, Mt. Dana (which I would climb the next day), Mt. Lyell, and parts of Yosemite Valley. I took the east ridge down until I ran into the trail again.

The scenery in this area was spectacular, and I thought it was overall the nicest scenery along the three climbs I did in the Yosemite area that week. Somewhere near my rejoining the real trail, I stopped for a drink and a brief rest, and I accidentally left my tan Lake City, Colorado, hat on the ground there. I liked that hat, and if you ever find it, please let me know! Reward offered: shipping costs, my gratitude, and a cold beer if ever we meet. 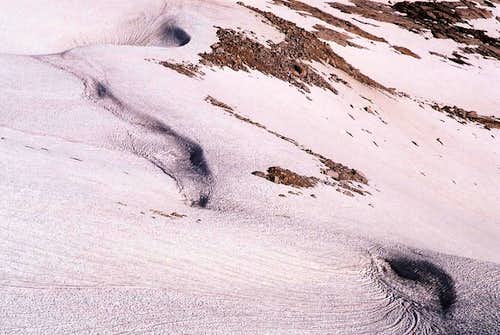 It was hard leaving Yosemite. The weather had been perfect all week and the climbing had been great. Routes up Unicorn Peak, Echo Peaks, and Lembert Dome were calling to my eyes, legs, and heart. But it’s always a good idea to leave a little unfinished business in the mountains; never do I want to leave them with the feeling that I’ve done all I want to do there.