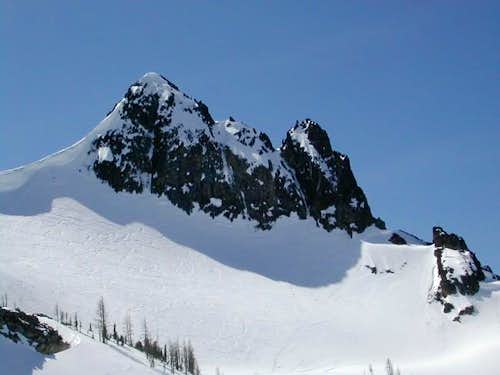 Blue Lake Peak from the north. Photo by wildstar 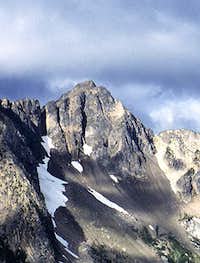 Blue Lake Peak is the 7,800 foot unnamed peak just southwest of the Early Winters Spires and about half a mile almost due east of Blue Lake. It is referred to as Wamihaspi Peak in some references. The peak is quite attractive from the north providing a pleasant view for climbers on main part of the Liberty Bell Group. Views from the summit of Blue Lake Peak are rewarding in all directions. Probably the most striking feature from the north is the large cornice between the main peak and its east shoulder. This cornice and the steep snowfield below it normally last until very late in the summer. 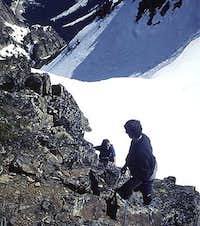 On the East Ridge snow free.

Unlike the marvelous granite of its famous neighbors immediately to the north, the rock on Blue Lake Peak is highly fractured, breakable and loose. Thus, it is not the home of any great rock climbs. Beckey does not provide a route description, but the most feasible routes are third to fourth class scrambles up the eastern and southeastern flanks. Some steep snow may be climbed depending on the route of access to the immediate east side of the peak and in very early season, it can be a snow climb all the way to the summit. This area is a very popular spring skiing area, and many ascents are made in conjunction with ski trips early in the season.

This peak has no official name granted by the USGS and seems to have a problem acquiring a name on which all can agree. Fred Beckey dubs the peak Blue Lake Peak in his climbing guide, which is probably the most widely known source of climbing information on the North Cascades. The name "Wamihaspi", which on the surface appears to be an Indian word, has also been applied to the peak. However, this turns out to be an unofficial name tagged to the peak by a group who climbed it in 1960 and applied the first letters of their last names WAtson, MIlner, HAll, and SPIckard. R. Watson - Climbing Record

John Roper, a well known Northwest climber, has proposed the name "Cornice Peak" at his new site where he also discusses the name situation in detail. Cornice Peak John's new web site Rhino Climbs, which is still under construction, is already a great place to visit. When completed, it will be a fantastic source of information about the North Cascades with details of many seldom visited summits as well as numerous stories of John's long and interesting climbing career including many first ascents. 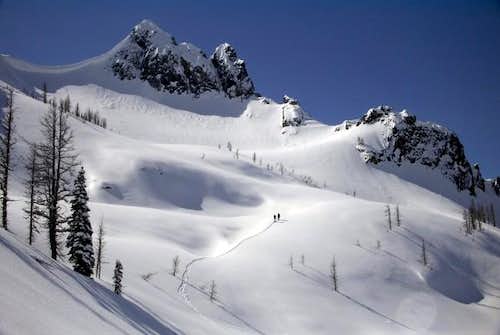 Skiers below the peak. Photo by wildstar

It is also possible to reach the north side from the hairpin curve to the east of Washington Pass. Climb to the top of the basin to the south of the Early Winters Spires, and you are directly below the snow slope leading to the famous cornice. This approach is best done when the basin is still snow filled (taking care regarding avalanches). Washington Department of Transportation web site with information and updates on the spring opening of Washington Pass: Washington Pass Information 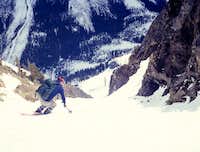 Blue Lake Peak sits in one of the most popular spring skiing areas in the North Cascades and the crossing of the saddle on its east shoulder is part of one of the more popular routes. There are several possibilities depending on how much work one wants to do and how steep a ski descent is desired. Generally, the saddle on the east shoulder of the mountain (above the large cornice) can be approached from either from the Blue Lake Trailhead (not so steep) or from the hairpin curve on the east side of Washington Pass (quite steep in places). The saddle is climbed at the extreme east (climber's left) side of the cornice. This can involve icy snow up to about 70 degrees depending on the season and conditions. There are usually very good steeps kicked deeply into the slope making it relatively safe without roping up or using crampons. 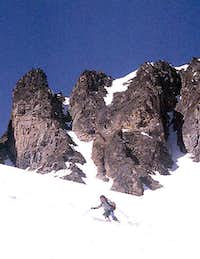 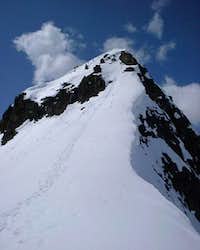 The saddle can also be reached by scrambling up the rock of the east shoulder - class 3 if careful. From the saddle, one can ski down to the south into the Copper Creek drainage then either climb back up or cross over the divide to the east into the Early Winters drainage and ski out to the hairpin. The more exciting option is to jump off the cornice and ski down the steep slopes to the hairpin curve. It is not necessary to obtain the saddle (or jump the cornice) in order to ski the slopes on the north side. NOTE: The approach from the hairpin curve goes directly up and across steep avalanche prone slopes. Judgment and care must be exercised early in the season.