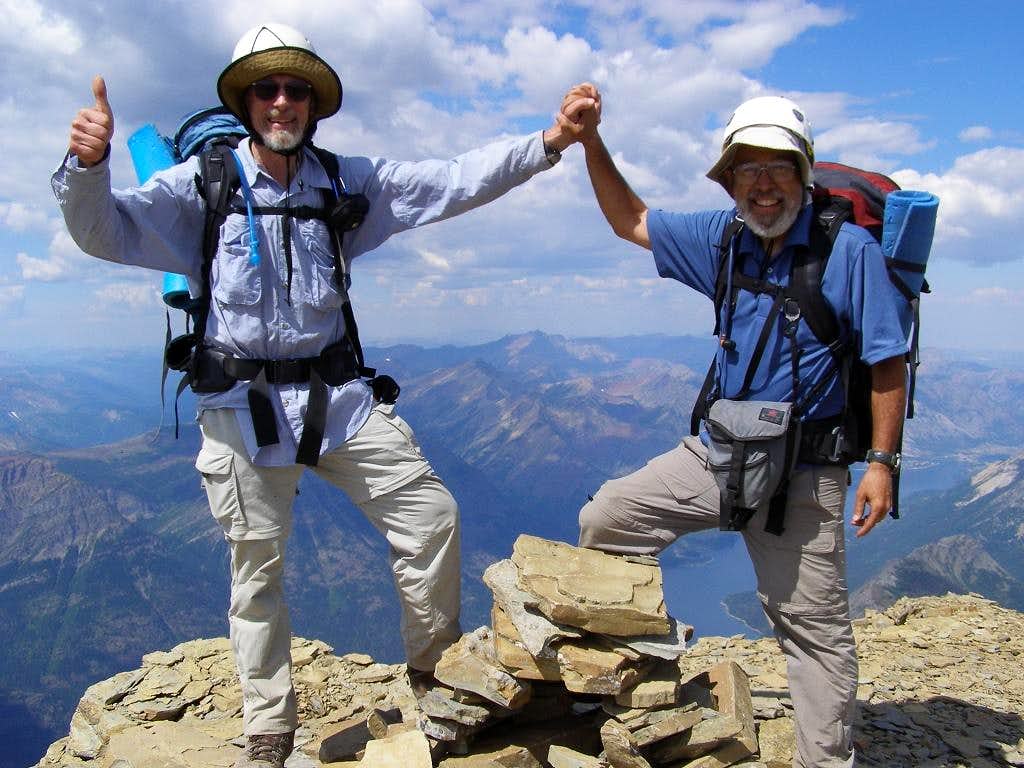 My long-time pal Duane Gilliland and I celebrate on the summit of Glacier National Park's highest peak, Mt. Cleveland. It was our final climb to complete the list of the 58 current and former Ultra-prominence peaks in the 48 states. (Mt. St. Helens is no longer an Ultra after the eruption of 1980, but we both climbed it in the '70s). Two other climbers, Bob Packard and Edward Earl, completed the 57 remaining Ultras before we did, but to our knowledge, nobody had climbed the 58 before we completed the list on August 17, 2008. Photo by Grant Myers.
« PREV NEXT »

CONGRATULATIONS!...and boy, does that bring back memories (and inspire future plans)!!!!

Re: Great shot, you guys!

Hey thanks Vernon. We couldn't have done it without all your great help. What a difference good weather makes! It's an awesome peak, and whenever you do it, I know you'll enjoy. -Bob

For some reason, I missed seeing this until
now. I must of been out chasing butterflies.

Thanks Larry -- it was a very fun list, but there's no rest for the peakbagger as the next list is already well underway! :-)

Darn lists anyway....Say, I will now admit that I'm an official P1K chaser kind of a guy. Utah has only 359 of them and so I won't run out of them anytime soon. How many P1K's in Washington Bob? heh heh....

Try 671 P1Ks in Washington, according to John Kirk. That's peaks between P1K and P2K, not including those above P2K. Colorado only has 344 such peaks, and it's a MUCH larger state that is much more completely covered by mountains. Well, you should be able to complete the Utah or Colorado lists in a lifetime, but I'm thinking not in Washington unless your name is Roper or Klenke! :-)

Indeed! Perfect weather, no grizzlies, great visibility, and completing a goal. Pretty hard to improve on a day like that!

60 and older and still going(Album)