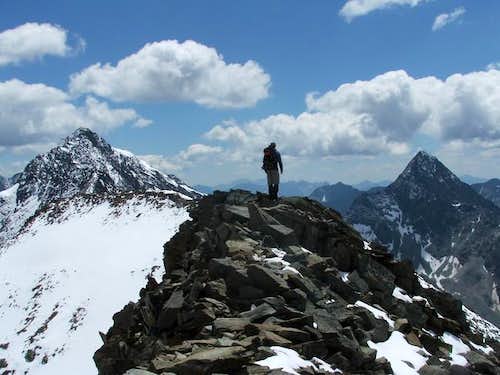 In Schober group, there are some nice and high mountains, but Boese Weibele (it is also referred as Boeses Weibl) is not on top of this rank. Still, the mountain is attractive enough, and, what is not common for the highest Schober peaks, offers a nice (although not just easy) ski tour from the very summit. It can be also attractive for less experienced mountaineers, who can reach a 3000-er without climbing hard. The mountain stands in the main crest, which runs from Schober group towards the north to Grossglockner group. As it is positioned towards the north, from its summit we can enjoy a nice view on all main Schober summits and on Grossglockner as well. On all sides Boese Weibele has moderate steep rocky slopes and towards the north it has a small glacier or snowfield, called Peischlachkesselkees. On the saddle east of Boese Weibele's summit a bivouac stands, supporting mountaineering activities in this part of Schober group. 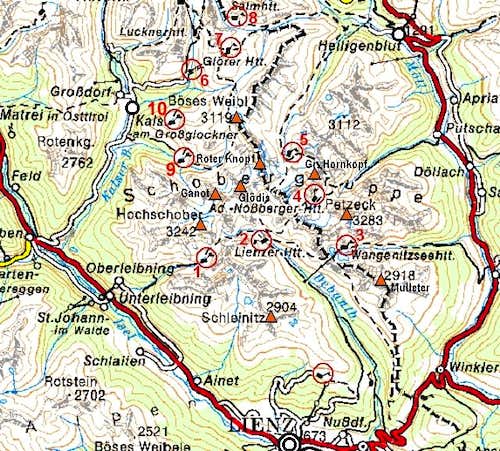 For the overall orientation see the Schober SUBGROUP page. All approaches from south, west and north start in the valley of Kalser Bach. From the main valley we can go into Lesachtal where the trailhead of south approach starts. If we go from Lesachtal to Lesachriegel Huette, we can start there the approach from west. The approach from north starts by Luckner haus, which can be reached by the road, going up there from Kals (toll) Boese Weibele can also be approached from south-east. In this case we start the tour in Heiligenblut, reach by the valley Elberfelder Huette, where one of paths goes in NW direction up to the bivouac and the summit of Boese Weibele. 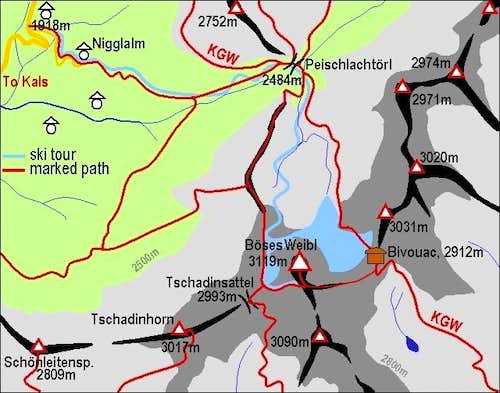 1. From the southeast, from Elberfelder Huette, 2346 m. Marked path (Wiener Hoehenweg) goes from the hut towards the NW on Kesselkeessattel, 2900 m (bivouac), and further on towards the west on the summit. 2 h 30 min.

2. From the south, from Lesachalm hut, 1828 m. Marked path (Friedrich-Senders Weg) goes from the hut first eastwards, then northwards on Tschadinsattel, 2987 m and towards the east on the summit. 3 h 30 min.

3. From the west, from Lesach-Riegel Huette, 2120 m. Marked path goes from the hut across the broad western slope of Boeses Weibl, reaching the shoulder, which goes from Tschadinsattel towards the north. By the shoulder on the saddle and towards the east to the summit. 3 h - 3 h 30 min.

4. From the north. Peischlach Toerl, 2490 m is an important saddle between the Koednitztal and the Leitertal. Many paths reach it from all sides (see the map!), the shortest one from Nigglalm (before it, you can park). From Peischlachtoerl the marked path follows a broad shoulder to Tschadinsattel, 2987 m, from where you ascend the summit. From Nigglalm 3 h 30 min. 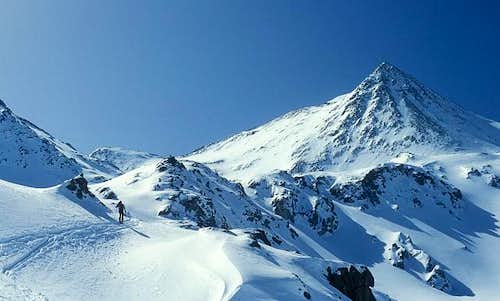 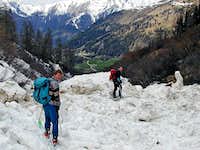 From Nigglalm the ski tour goes almost like the above route #4. From Peischlachtoerl we can go southwards through a shallow ravine and reach the shoulder to Tschadinsattel later, just from below the summit rocks of Boeses Weibl. From the summit it looked fine also to ski down the Peischlachkessel Kees, but as weather deteriorated, we didn't try this option. 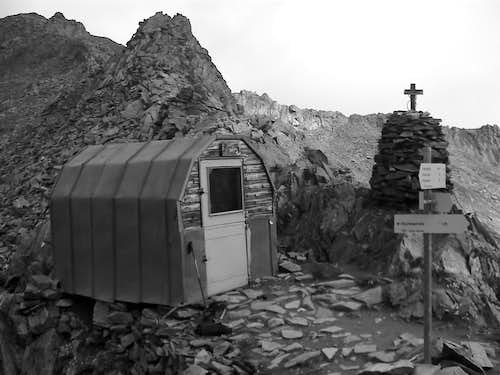 Around the Boese Weibele summit there are many mountain huts, but for a quick ascent they are not really needed, because the summit can be reached in one day. Only the eastern ascent (from Heiligenblut) is too long, so the Elberfelder Huette is useful. It is much different, of course, if we are crossing the whole Schober group, where huts can be of great help. Huts around Boese Weibele are (numbers refer to those on the map):

No limitations. The Schober group is part of National Park Hohe Tauern. The road to Luckner Haus has to be paid, the road into Lesachtal is closed for public traffic.

In summer and autumn, approximately from July to October. In spring the best months for tour skiing are March to May.

It might be interesting to note that the name "Boeses Weibl" would be translated as "evil little female" in English. Makes me wonder about how they decided to name it!

It indeed means this! I couldn't first found a good translation, now you did it in a descriptive way. Female is not "strong enough". In English there's certain a better word for Weibl.

Why this name? I don't have a clue. In the guidebook it only says that the summit is not "so evil". And across the Isel valley, there's another summit with almost the same name.

Found this page : The names of mountains but since you probably will have problems with the German text I have translated the important section using altavista.com. It seems that the mountains in question were thought to be haunted places !?!

The radiant emittance of the holy mountain seems to be on the whole independent of the faith of the adjacents resident. Which is holy, remains holy, as such simply one takes over. Innumerable examples could be stated for it. It is well-known that Christian high places sit in entire Europe on pre-Christian Heiligtuemern, begun of the Vatikan.

The same applies to the mischief seats. In the alps and Pyreneeses is their Legion. Charm mountains like the Grimming, the hearing same suppl., the Schlern and the Schoeckl, the lecture chairs, devil horns and/or stones, witch points, bad Weibele, Pic de la Munia, Monte Perdido, the Maladeta massif with the highest summit, the pico de Aneto (3.402m), to call over only these and, outside, classical breaking into or block mountain have their call since eh and ever. Thus the argument becomes clear: everyone for itself and it remains thereby. In this dimension there are hardly Uebergaenge(17), no trans, also expirations comes to a hold, the time does not work not in the charm mountain and/or runs more slowly. Thomas's man has this convincingly, although long-windedly, represented. Charm mountain, sin mountain, Venusberg. Siebenschlaefer(18) entschluepfen surprises mons veneris as pure gates or Talmi Pilger. Venusberg usually sump-outstanding Anhoehen(19) are anatomical and/or etymologisch, with magnet cave and Sabbatplatz. The charm mountain loads to Exerzitien, which give support to the fear of the mountains. Like Erotik, bad doing of the time hoehnt, but are not enough. Daemonische driving connected with the mountain carries out itself at night, because it can happen only in the dark, on a mountain, in a ravine (free contactor) or a cave (Sybille). It is light-shy, hidden doing. The mountain hides the more effectively, the more darkly, grimmiger (Grimming!) it out-looks. If its radiant emittance crystallizes then still in the form of kites, it does not need to surprise that the Okkultismus thereby found the necessary Requisiten.