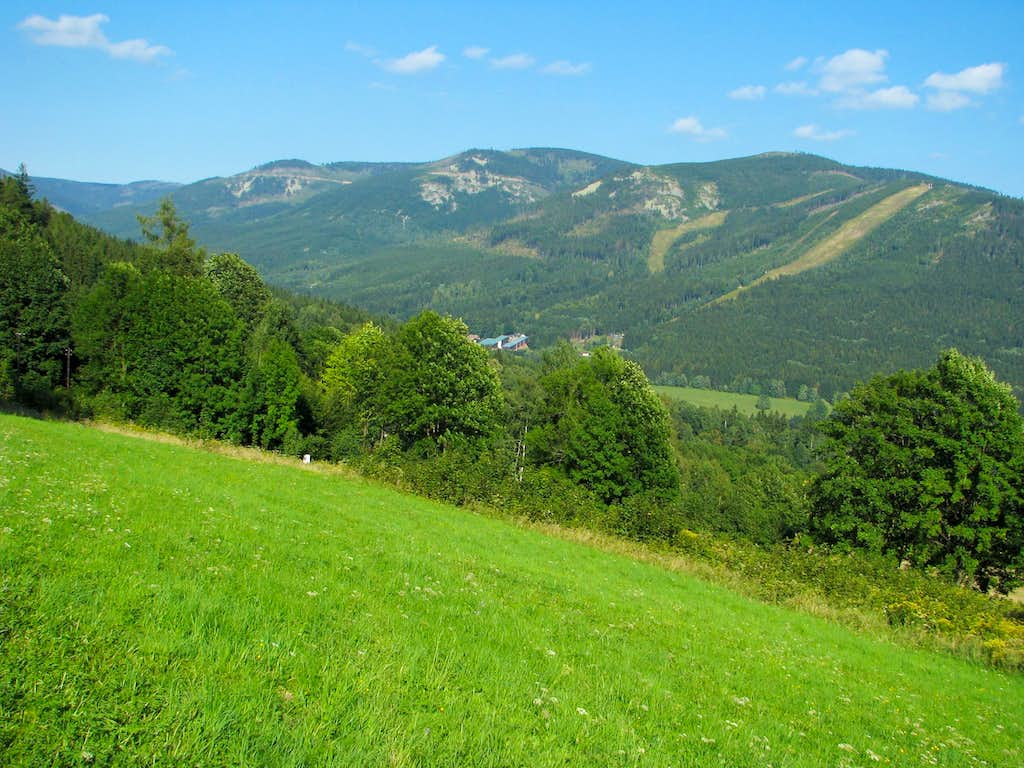 This is a photo of the historic border between the Czech provinces of Bohemia and Moravia, taken just east of the village of Horní Morava. Just beyond the peak of Podbělka (1307m, in German Lattichberg, the mountain in the middle) across the Morava Valley is a line of conrete bunkers built before World War II.
« PREV NEXT »

Sorry, I am still confused.

Is the opposite side of that border where the
song "Bohemian Rhapsody" was made famous ???

I appreciate your growing green. As for this part of Eurasia, I've already told you to take advantage of having Liba nearby. No brother, I'm an ONLY CHILD.
When it comes to music, my ear's catching a bit different tune

Here in the Western World, someone once told me:

He was obviously wrong, brother !!! : ))))
Here's your non-musical bonus, Larry, for your involvement in the transoceanic musical exchange. The map shows things before war I.

Bohemia was part of the Austrian Empire?

Interesting, Jacek. That takes a lot of
confusion out of my thought process.

I'm not trying to offend anybody, but that
map, (which is a good tool for understanding), resembles a jigsaw puzzle !!!

Hungary remains the largest piece of the puzzle, right? I am thanking my lucky stars
that I don't have to learn Hungarian.

Yes, I have to ADMIT that we are quite
"spoiled" here in the Western World. : ))

In a "nutshell," you're telling me
there was a "tumultuous uprising" in the year
1620, when the Bohemian Protestants were
CRUSHED by the Austrian Imperialists ???

And, this sparked a war that lasted for 30
years in central/eastern Europe ???

And ... because of that war, we now see this area as a "fragmented paradoxical puzzle,"WHERE everybody has to learn 5 or 6 languages, and the map gives people "headaches and heartaches" each & every time they look upon it ??? ??

I think I would have fought on the side of the Protestants, even though my ancestors
immigrated to America; where I later became
Catholic.

But ... being that I have failed to turn back the hands of time, I have to live with the fact that the WORLD remains a puzzle that I will never completely understand.

So ... I think I'll have that Czech beer now,
and take a rest before awakening to a world
that will NEVER be quite the same.

Never again ? :))
Talking of beer, Larry, the pint of Czech Pilsner down there in the valley in the photo – inside the cool, quaint inn at the crossroads – was one of the unforgettable moments on that mini-trek of mine.


"A true friend is someone who thinks that you are a good egg even though he knows that you are slightly cracked." -- Bernard Meltzer."

But, if we examine this further ...

Did Mister Meltzer actually KNOW what he was
talking about, or was it all just a
horrible and unthinkable dream ???

You can always find the answer here

Thank you, my esteemed friend from the East !!!

I ain't that unlucky. It's always blowing up in my face! :-)