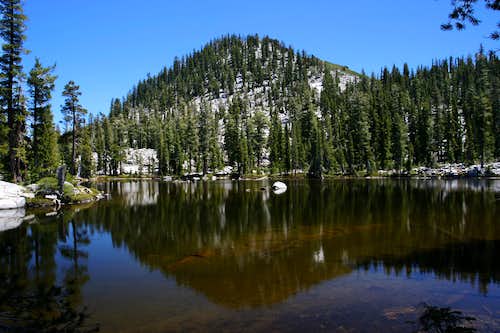 The Boulder Lake Trail is one of the more popular routes in the Trinity Alps. The short, relatively level route deposits one at the edge of Boulder Lake only 1.9 miles from the trailhead. While the lake is an excellent destination in its own right, it is only the gateway for a great introductory adventure into the backcountry of the Trinity Alps. From Boulder Lake, one can continue into the granite cliffs above the lake, visit Tapie, Lost and Found Lakes and throw in an ascent up Tapie Peak, quite possibly the Trinity Alps’ easiest summit to reach. Such a climb, while easy, is not without its thrills and its payoffs. Views from the summit are outstanding. 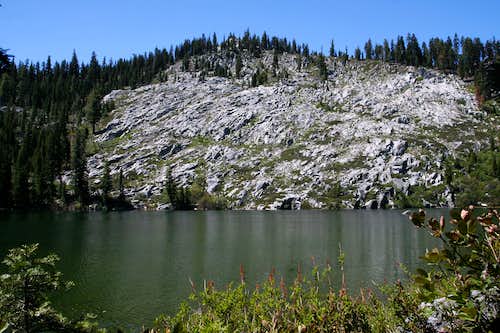 The Boulder Lake Trail begins at the end of a large trailhead, where information about the area is posted. The trail immediately heads off to the south, following a now abandoned jeep trail. The grade is very mild and occasional views to the south are possible when the tree cover opens up. After about 0.5 miles the jeep trail transitions into single track and enters into the trees from which it will remain for most of the rest of the trip to Boulder Lake. A little over a mile the route makes a switchback, heading north before rounding the top of a bluff. Ducks found on the left side of the trail mark the 0.5 mile route to Little Boulder Lake. From the junction with the Little Boulder Lake route, the trail drops moderately into the Boulder Lake basin. After the trail drops, it deposits one at the outlet of the lake where there are 5 or 6 good campsites. 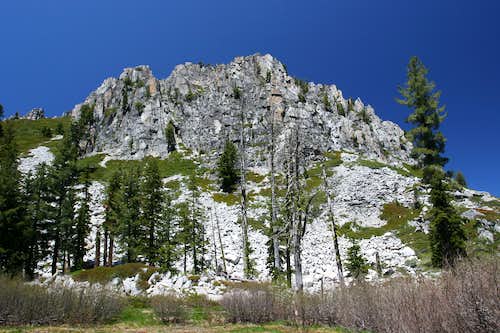 Tapie Peak from the headwaters meadow

While it is possible to reach the lakes by climbing directly up the granite cliffs and boulder fields at the south end of the lake, an easier route can be had by following the trail a little further beyond the outlet and then traversing the boulder field at the base of the peak.

From the outlet of Boulder Lake, the trail continues along the eastern edge of the lake, passing through meadows and crossing the inlet creek that flows into Boulder Lake. The route continues along the side the creek, through more flower filled meadows. At this point, the trail begins to climb in earnest. The tree cover remains and provides shade, but to the right of the route is the large boulder field that extends north from the sheer flanks of Tapie Peak. This portion of the trip to Tapie, Lost and Found Lakes is the steepest of the entire trip. Halfway up the climb, the trail crosses the creek and continues climbing on the east side. If reaching Tapie Lake is the only destination one has in mind, this is the point from which to strike out across the talus slope. Staying at this level will deposit one just above small Tapie Lake, which is nestled in a small granite bowl high above Boulder Lake. An awesome view of Mount Shasta awaits from the dike on the north side of the Lake. Climbing above the lake will lead to Lost and Found Lakes if one decides to continue further. 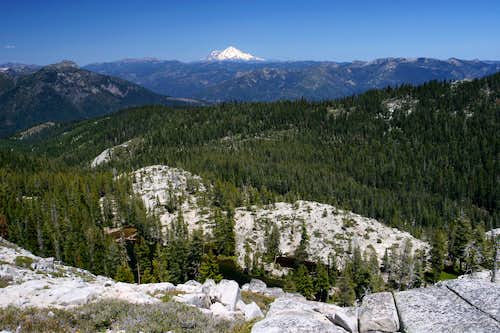 Continuing on along the east side of the creek, the trail maintains a generally southern orientation. When the trail makes a hard eastward turn, this is the point from which to leave the trail. The route is cross-country for the rest of the trip. Once off the trail, listen for the sound of running water, which should last through most of the season. Hike toward the water. If none is heard, head due west from the trail. Either way, one should have no trouble finding the small meadow that constitutes the headwaters of the creek that flows into Boulder Lake. Tapie Peak rises dramatically above the meadow, showing off its most rugged exterior. If climbing the peak is ones goal, resist the temptation to climb directly up the south face. Horrific brush fields bar any reasonable access to the summit.

Beyond the meadow, the route to the lakes simply traverses the boulder field at the base of Tapie Peak. If one manages to maintain a fairly level course, then after following the boulder field, one will have to cross a small draw, on the other side of which is Lost Lake. This is the smallest and shallowest of the three lakes at the base of Tapie Peak. A granite shoulder north of the lake provides great views of Mount Shasta, Billy’s Peak, Ycatapom Peak and the Boulder Lake basin. Reaching Found Lake, the largest and friendliest (in terms of camping) lake is a short trek south from Lost Lake. Tapie Peak is an attractive backdrop to this pretty lake. 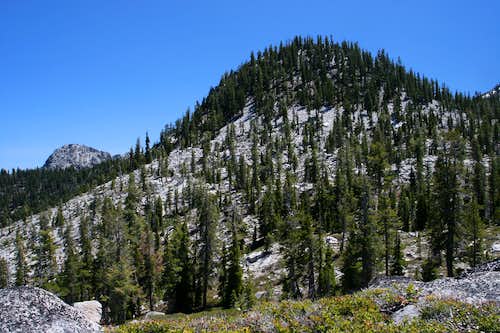 Climbing Tapie Peak is a simple matter once one has reached Found Lake. Simply hike southeast from the lake and climb the tree covered boulders to the summit. Views from the summit are good, particularly to the southeast where Ycatapom Peak (lovingly called Y-cat by Trinity Alps fans and climbers). Considering the proximity to the trailhead, relative lack of elevation gain and number of lakes around the mountain, Tapie Peak is without doubt one of the easiest peaks to climb in the Trinity Alps. Only Preacher Peak above the Big Flat can claim to be as easy as Tapie Peak.

In downtown Weaverville, drive north on Highway 3 for 40 miles. About 0.25 miles south of Coffee Creek, turn left onto Forest Road 37N52. Proceed on this road for about 3.5 miles. Turn right onto 37N53 and continue 7.5 miles to the trailhead.