Bowl of Fire refers to an area of red colored desert to the east of Las Vegas, Nevada. The bowl can be accessed via North Shore Road, a 50 mile long scenic desert drive that parallels the northern shores of Lake Mead on Colorado River behind Hoover Dam. I had read about Bowl of Fire on this internet site. Originally, I wanted to first climb the nearby Hamblin Mountain and then go on to hike the Bowl of Fire but I had a bad cold and my ears were ringing so I decided to do an easy hike in the Bowl of Fire only.

Left our Hotel on Las Vegas Strip and got on I-15 south to I-215 East which became Lake Mead Dr. Turned north onto North Shore Road. After mile marker 18 (at 18.2) miles, I parked in a small paved pull-off on the north side of the road.

At the start of North Shore Road, you must pay to enter Lake Mead National Recreation Area.

This is the path that I happened to take as shown on the map. You can obviously follow many other paths.

At the starting point, I could see Hill 651 m to the north rising above the flat desert floor. There was no trail but I knew I had to go to the northeastern edge of this hill to get behind it. A portion of the red colored mountains could be seen sitting among the brown desert mountains. 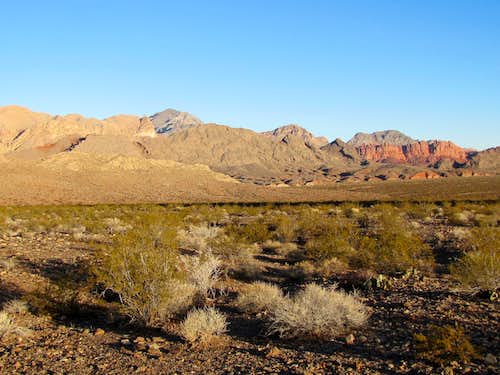 From Start of the hike

Started my hike at 7:25 a.m. It was 43 degrees F. Much recent rain had made the desert floor damp. Once I reached the northeastern foot of Hill 651 m, the red colored lands appeared much closer. 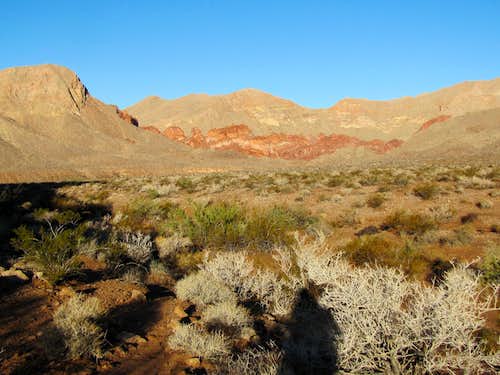 Continued to hike toward the red colored areas and crossed a dry wash called Callville Wash. 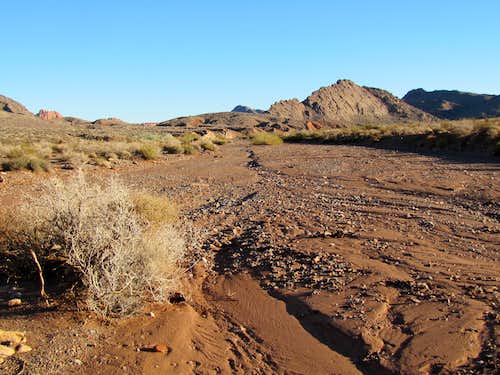 I was getting close to the sharp double summit of Point 822 m known as Murphy Peak. 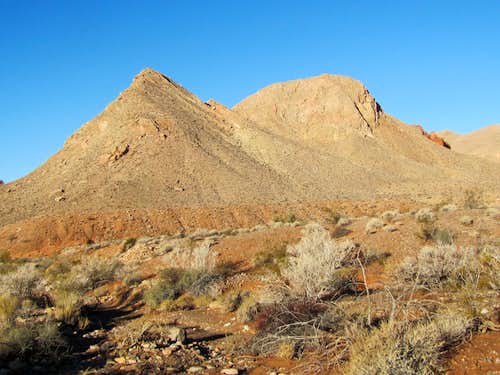 Got into a branch of Callville Wash and continued to hike toward the red areas. 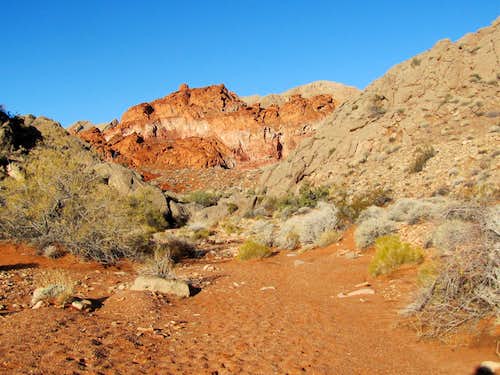 Branch of Callville Wash to Bowl of Fire

Soon reached a place where boulders created an obstacle to my hike. A little bit of easy boulder climbing on the west side of the wash got me beyond the boulders and back to the bottom of the wash. 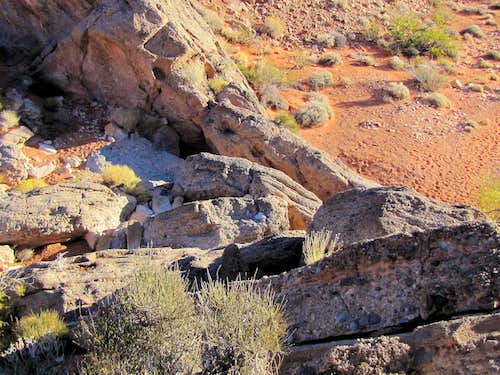 Looking down at the boulders

I was now in the Bowl of Fire. I did not have any particular destination. Kept walking up some slopes toward the areas that appeared most red. 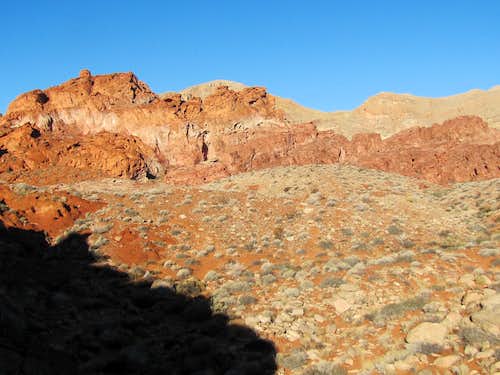 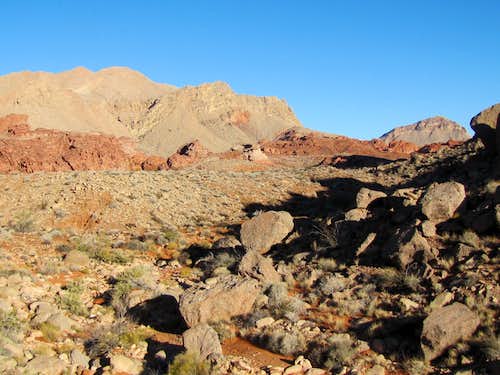 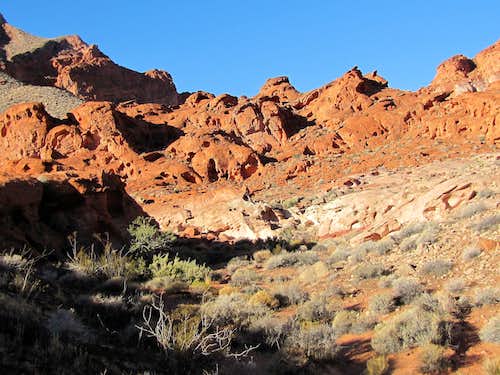 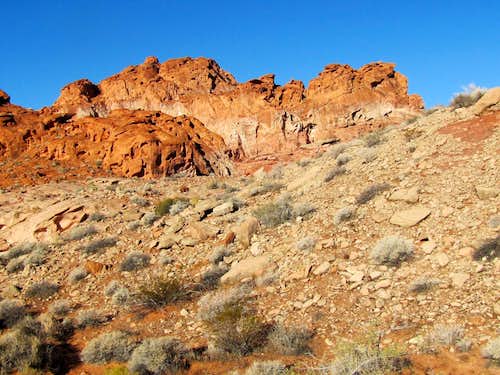 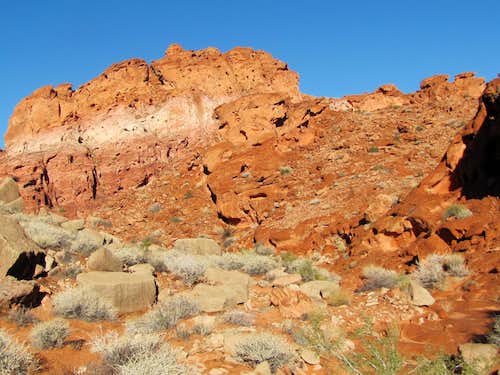 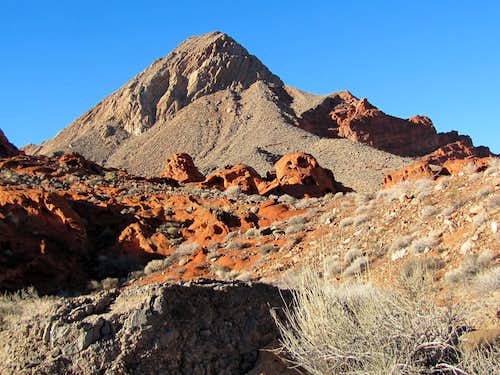 Many of the rocks had holes in them. 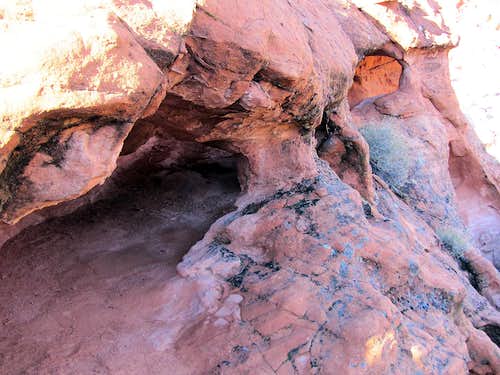 I then noted a formation that looked like the head of a turtle sticking out of its shell. 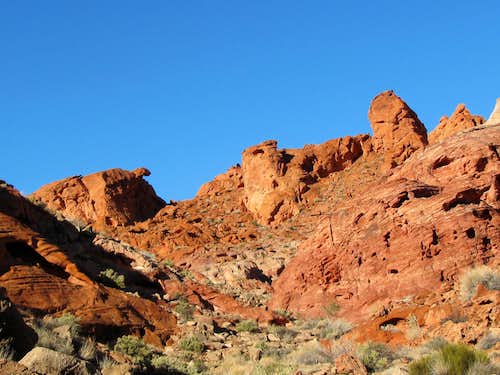 Kept walking up to and beyond the turtlehead formation. 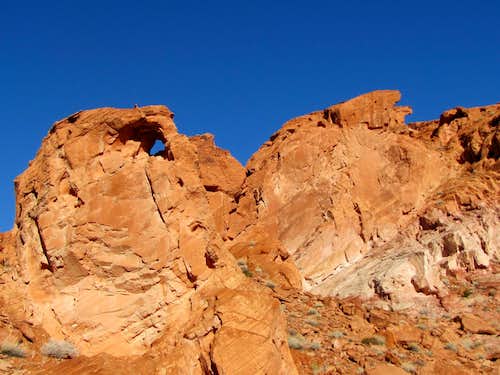 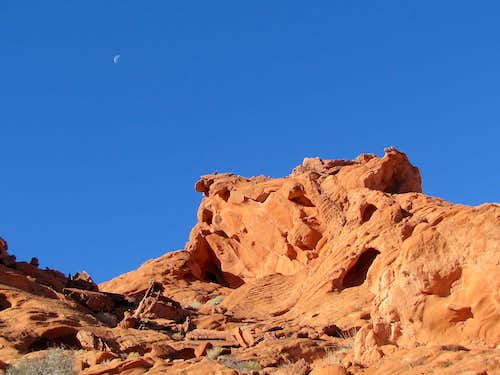 At 8:40 a.m. I reached a saddle at the base of the north face of Murphy Peak. The views were spectacular. 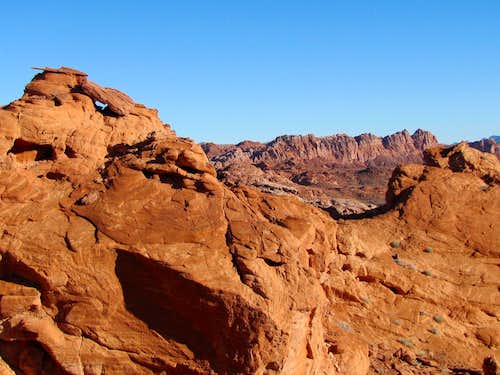 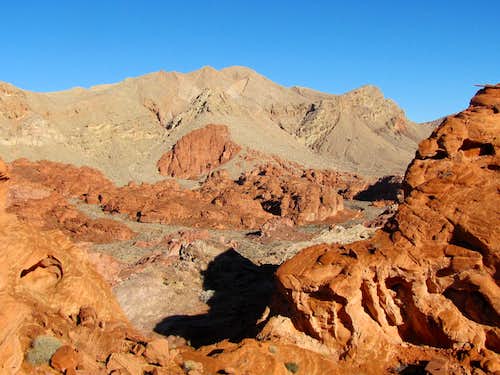 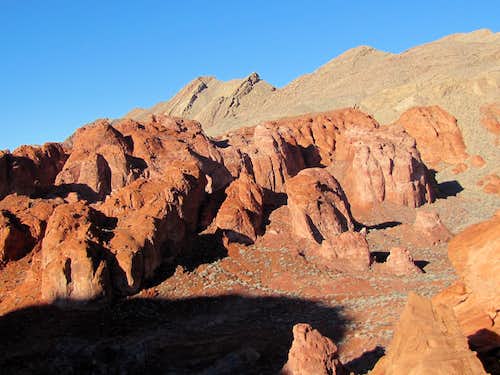 A small part of Lake Mead had come to view in the distant southwest. 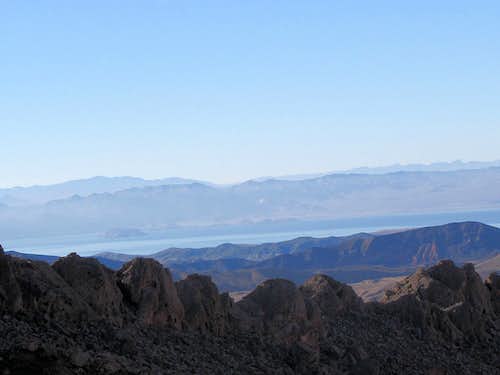 Northshore Peak was visible to the southeast. 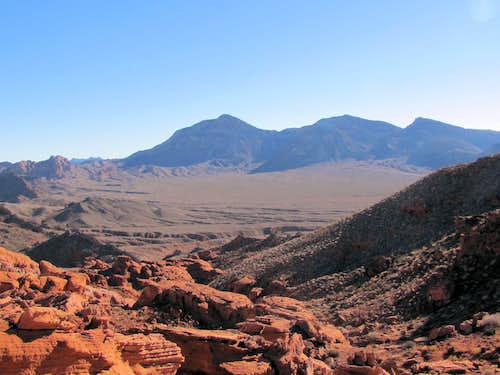 I could see the north wall of Murphy Peak. 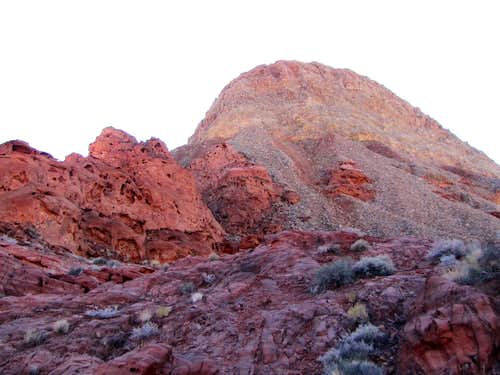 I sat at the saddle enjoying the views. Airplanes from Las Vegas Airport kept flying right over me making a lot of noise. I did not want to go back the way I came. Looking at my map, it appeared that from the saddle, I could head west going down to reach the bottom of a dry wash that made a big U-turn returning me back to the beginning of Bowl of Fire near the boulders. I left at 9:20 a.m. and went down into that dry wash. 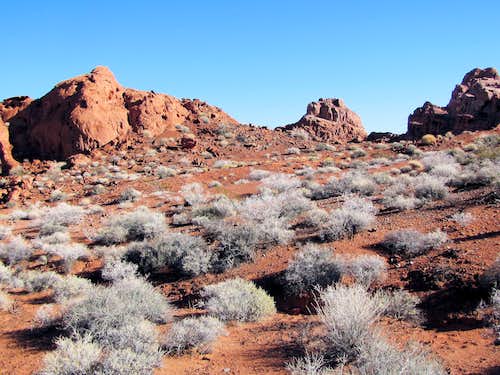 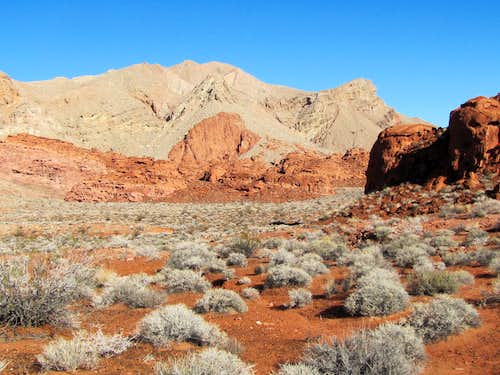 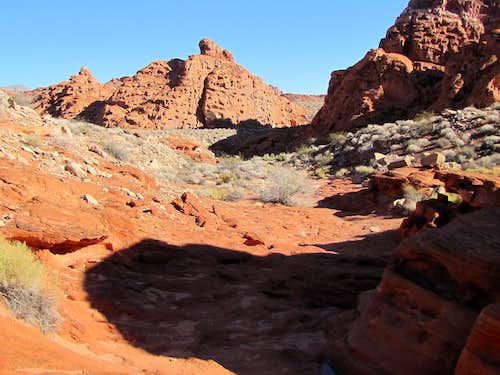 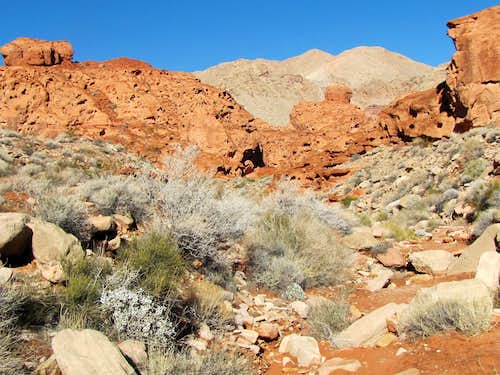 After the broad U-turn, Murphy Peak came to view again. 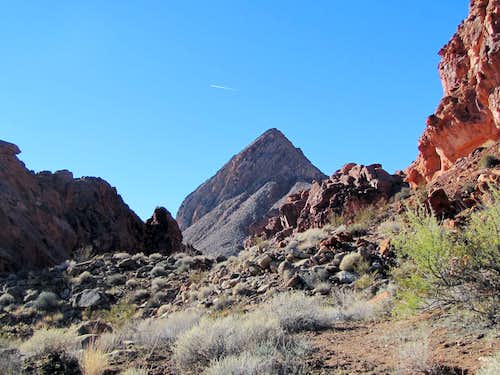 I continued down the wash until I reached the boulders and then exited the Bowl of Fire. 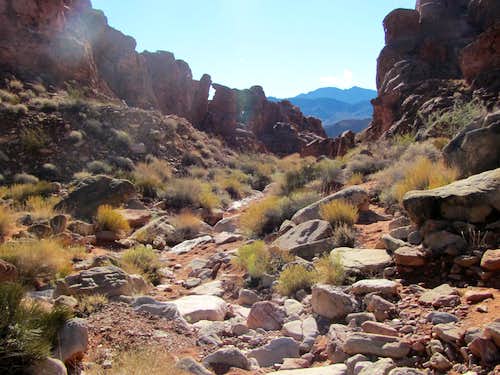 Near the road, Northshore Peak was in good view again. I reached my car at 10:30 a.m. 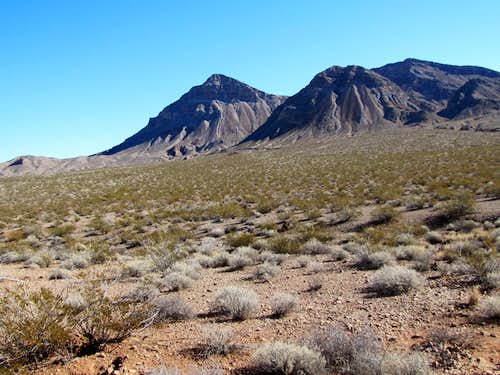 Isn't this place called 'Valley of Fire' State Park? I was there a few years ago, and its definately an area of pretty spectacular scenery that's only about 1.5 hours east of (and a world away from) the hustle and bustle of Las Vegas. Lots of short trails that go all through the rocks.

Re: Maybe a naming mix-up