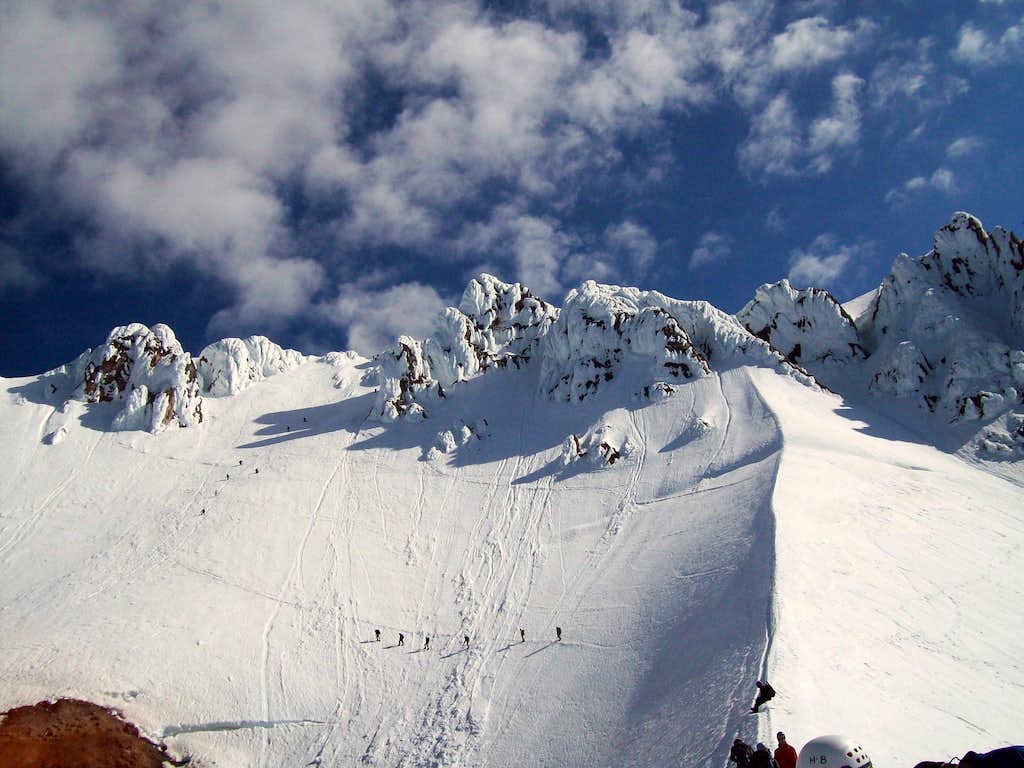 Getting ready to go up the Old Chute

It was a long time coming, but after disappointment on Mt. Hood in April and Mount Shasta this Tuesday, it was time to head back once more. This time I invited my old friend nwhikers.net MountainMan, who I have had many successful hikes and a successful climb up Mt. Adams. I have never had a unsuccessful attempt with MountainMan. Having MountainMan here made a world of difference on this trip, especially on the last leg where a 40-50 degree hard snow/ice climb up the Old Chute. He helped me through that section when I was having second thoughts about some of the routes.

All right, here is the story. I have been trying to get MountainMan on a climb for a while but due to schedule issues nothing ever could work out. It though became obvious to be though that both MountainMan and I are going to be in prime condition for a Mt. Hood attempt. I was going to be coming from being camping for a couple of days around 10400 feet while Jason was coming off a backpack trip where he was going to be camping at 6000 feet. We would have two days to rest which is plenty of time. And the conditioning aspect worked like a charm.

Mountain Man picked me up at 6:00 pm in Seattle and we headed down to Hood where we got a slightly late start at 11:30 pm. I noticed that the Mazama Club and others were actually beginning a climb up there and I thought it would be good to link behind them in order to have them kick steps for us and set a pace so that we didn't burn out or get overtired. This idea again worked as a charm because we were able to ride behind a number of different teams all the way up to the Hogback and never even broke a sweat. It was like I was taking an easy stroll in the park. I know this sound strange but I also wanted others around due to the fact that Hood has a very recent history of knock down people with rock, sulfur fumes (as I found out last time) and that steep Old Chute.

When we got to the Hogsback the climbing team waited there to rope up. From what I saw I think it slowed them down and left them in the danger zone longer. As for the Hogsback, it is steep now but the burgshrund is just barely showing on the sides but not on the Hogsback. One team went up the Hogsback and actually crossed over where was bergshrund would be and decided to do a steep side traverse to the Old Chute. This was shaky and I was a worried but MountainMan kicked in steps in the icy side traverse and stayed close to get there that section. Then the team went up the steep chute kicking in decent steps to the slopes. We continued (though I was get a little shaken) to the ridge. 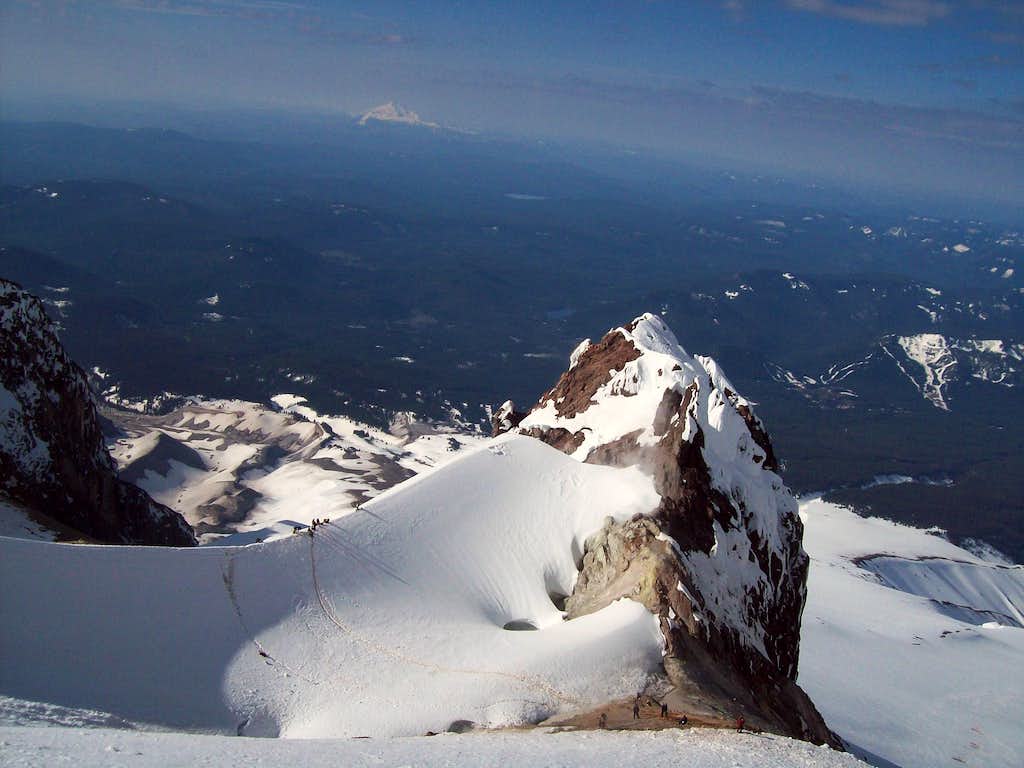 Looking down into the Crater!!

The teams below us actually decided to hike down into the sulfur pit area (crater) where there was a nice dirt spot (partly steaming) and setup there ascent of the Old Chute from there. At first I thought this was absolutely nuts, but after further examination it was a much safer way to go up.

As for us we passed by the knife edge, which was nothing compared to others I have been on and cruised to the summit. For 20 minutes MountainMan and I were King of the Hood. As for the view the Volcanoes were hazy but, St. Helens, Adams, Rainier, Jefferson, Sister and Bachelor were all out in force. We made it to the summit by 7:15 am so we could only spend 30 minutes on the summit before dangerous ice and rockfall would be the theme of the day.

After 30 minutes it was time for that dreaded climb down the Old Chute. [b]Can you say down-climbing. [/b] This though was MountainMan's specialty. He has little fear of down-climbing from his skiing days. I though, despite being trained all aspects of the ice axe still had to gulp my fear and down-climb the thing. That is exactly what I did. The snow was ice hard but my ice climbing crampons worked like a charm here. The self belay worked well and despite the fact that I was slow I gained a ton of confidence here heading down. I decided to head down to where the climbing teams had set the route. Yes there was some sulfur smell but they clearly knew what they were doing here. As I down-climbed you could here the ice beginning to break off the cliffs. At first this was terrifying. But after being hit with a couple small pieces on the helmet I got used to it. It was a fact of life if you are to do Mt. Hood. I became immune to the constant ice-falls and did my best to get down the Old Chute. 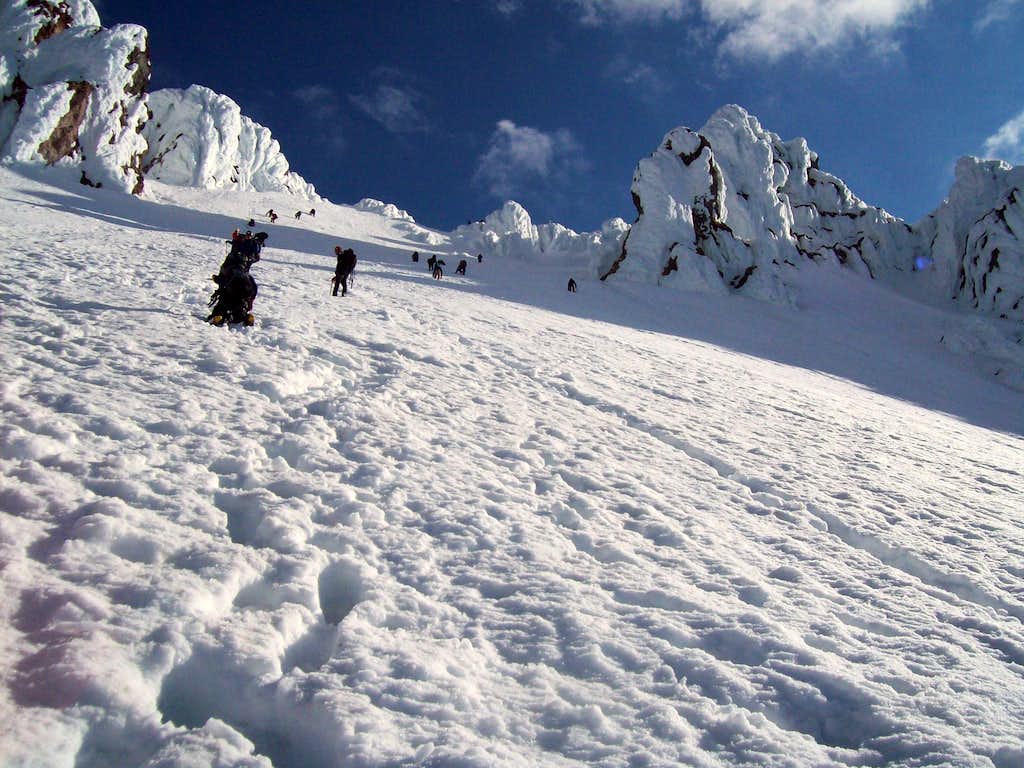 Heading down on the ice 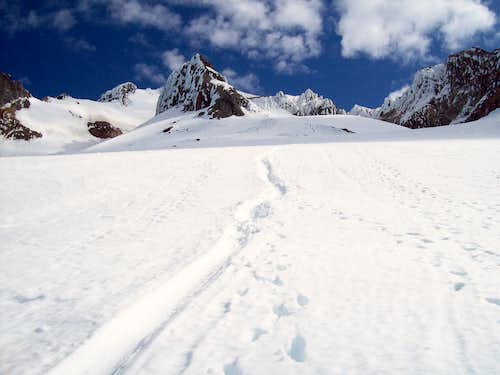 Looking up at the Hogsback

Once on the Hogsback I was home free, and glissade time was just a little ways down. MountainMan and rode a number of good glissades down the slope of Hood and saved a ton of time and energy. On the way down we enjoyed the closeup views of Hood as well as views of Mt. Jefferson. We headed back to the car and celebrated victory at a Mexican Restaurant. MountainMan lived up to his name today and the trip was awesome. Great decisions, great time, and great taking advantage of opportunities!!!!

Getting Hood is a good feeling. Nice pics and enjoyed your report.

It was a big stepping stone for me. I have worked up a new love for the volcanoes out here and hope to convert it to the North Cascades higher summits and many others in the future.

...cool pictures! Congrats on your summit!

Thanks. I hope now to keep this momentum into Baker.

Cause the boys on Hood are always hard, you come talkin that trash, we'll pull ya card. Haha Hood looks great!