I’m not quite sure just quite how to classify Bradley Mountain in terms of buttonholing it into a specific range.  If you skim vaguely at a map you would think superficially that it belongs in the Salt River Range, but that's not quite true, for even though Bradley sits directly along the north-south running line of that range it also happens to be on the wrong side of the Greys River from the Salt River Range proper and is geographically and indeed, physically separate from Stewart Peak, the northern harbinger of that range. 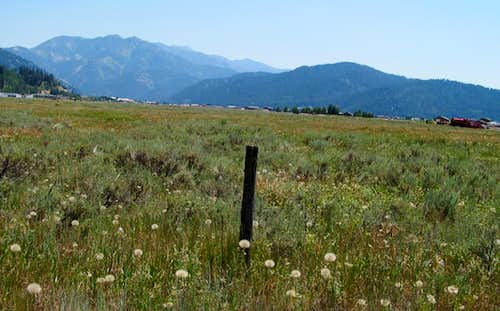 From Palisades Reservoir in Idaho
Technically I guess it would be part of the Wyoming Range or, more specifically, I’ve seen it classified as part of the Hoback Sub-range of that range, despite the fact that Bradley sits somewhat perpendicular to that range, its east-west running ridge hitting the Hoback Range at nearly a right corner near Grayback Ridge.  If you go by drainages both sit on the same side of the windy Little Greys River, so I guess perhaps that explains the classification.  Unlike its neighbors, even its gentle Wyoming Range brethren, the terrain of this peak is far from alpine; indeed you’ll find little talus or glacier carved blue lakes.  Rather, its an ambling (if steep) stroll through sagebrush, grass, fields of brush and wildflowers, and an occasional fetid and stunted pond.  If anything Bradley’s green slopes seem more similar to the lower summits of the nearby Snake River Range, though it is very much separated by it from that range’s namesake river to the north of Bradley.  Really it’s an unassuming mountain, surrounded by higher peaks on the north, south, and east, but it is that fact, as well as the deep river drainages that cut several of Bradley’s flanks, that makes this peak one of Wyoming’s few 2,000’ prominence peaks despite its Napoleonic (relative) stature. 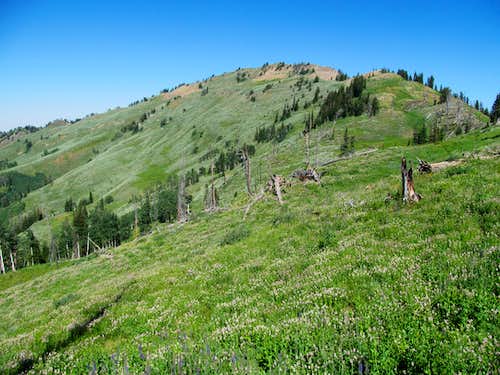 A humble P2K amidst more glamorous Greater Yellowstone peaks...
If you crave the far more alpine characteristics of Bradley’s many Greater Yellowstone neighbors, then I can’t blame you.  For those with willing legs views are cheap in this area, and unless you’re specifically going after the Wyoming prominence peaks, why waste your time on a little grassy knoll when far more pastoral alternatives avail themselves to you?  Again, I can’t argue with you.  Even despite its proximity near the town of Alpine, WY its summit is hidden, and nearby Ferry Peak looms much more impressively.  All I can say on Bradley's is that it does have an open summit, good views of the area (especially when it’s not too hazy) and its many ranges, and a steep and blistering route that will give your lungs and sweat glands a good workout on a hot summer’s day, as well as the fact that it is easily accessible along the Greys River Road just a few minutes outside of Alpine.  That, along with quite a riddle in terms of being able to find and follow an obscure trail to the obscure summit remnants, will have to be incentive enough for you to pursue this range.  Otherwise, climb the many intriguing summits nearby, but don’t forget to take a picture of this unassuming mountain, two thousand feet of prominence and all, and attach it to this page if you could. 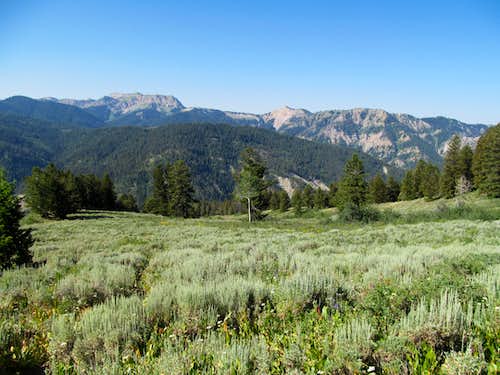 ...such as these.  But it's not a bad view along the hike

Getting There and SE Ridge Route

There is a trail coming up the southeast face and ridge of this mountain not on the topo maps.  SP member gjagiels had stumbled upon it on his way down and thankfully I was able to get some beta from him.  Otherwise you face the possibility of really bad bushwhacking, especially if you come from the small dirt road leading up the gully south of the summit proper.  He advised me to find a flat grassy point around 7,700’ along the SE ridge and spot the trail from there.  I was able to do this, and tried to follow it all the way back down to the road.  This is what I could gleam: 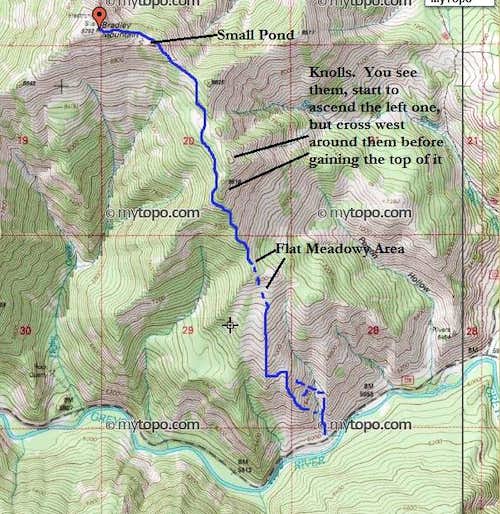 Appoximation of the vague trail up Bradley (courtesy of loj)

Leave Alpine at the Greys River Road junction across the street from the 3 Rivers Motel.  Drive for seven miles; it's a good gravel road any sedan can make.  As you near 7 miles you’ll notice the road looping southeast, dipping south then after hitting the southernmost point of the dip, swinging northeast after that.  Watch out for a cattle guard right here.  Slow down.   You’ll find a turnoff right after the cattle guard.  You can park here and start making your way up Bradley here, and that’s what I did.  But for your best chances of finding the trail proceed another .1 - .2 miles, finding a second small turnoff on the right (river) side of the road.  Park there.  Bradley looms directly to your north (left).  You will see a small drainage, and two ridge arms flanking it.  Cross the road and step through some brush.  You can hit the ridge on the left (west) and start climbing it immediately, and as long as you stick to the ridge crest you’ll eventually find one branch of the trail.  Otherwise, hit the ridge on the right and you’ll soon spot the trail sidehilling its way up.  I think at some point this branch of the trail splits.  The left split will cross the little drainage not far from the road and wind up on the left abutting ridge.  That’s the one I followed down from the mountain down to the drainage and practically to the road.  I think the other right split ascends that right ridge and probably meets the main trail higher up on the mountain.

I can only speak for the left branch of the trail I followed.  It steepen and climbs up to a small outcrop, then continues along the ridge.  Eventually you can see a few knolls ahead.  These are just mere small bumps along Bradley’s flanking ridges but keep an eye out for them regardless.  No matter what, you want to aim for a relatively flat and broad meadow-y area around 7,500’ to 7,700’ feet.  Even if you had been able to follow the trail you might lose it among the tall wildflower bushes and grass.  I think there’s another game trail too that works its way up from the gully to the left/west of this ridge (I found it on the way up).

Contour along a generally northerly direction from here, picking up bits and pieces of the trail if you can, and try to pick it up further down as it begins to ascend the knolls ahead, the left one of which eventually becomes the southeast ridge of Bradley.  Eventually the ridge will narrow and the trail will climb more steeply through some wooded areas.  Here the trail may be hard to follow as it traverses deadfall and brush.  In general when you lose it or when you see a split try to contour or split leftwards.  There is one area where a right branch of the trail will take you along a pretty nasty section of really steep loose dirt before rejoining the ridge crest.  Avoid that if you can.  Before you reach the top of the knoll sitting atop the ridge, around 8,200’-8,300’ or so the trail will swing left (west) as it crosses from the right/middle of the ridge to its left side, then sidehills below the ridge crest through a nicely shaded area.  Here the trail is fairly easy to follow.  Follow it as the true rounded green summit of Bradley appears for the first time, and avoid smaller game trails that seem branch right up the ridge crest.  Arrive at a small flat meadow around 8,500’.  Here you may come to a vague junction where a barely noticeable branch of the trail splits left and obviously downhill into the drainage below Bradley’s south face.  Avoid that and take the right branch as you finally crest towards the ridge and approach the peak.

You’ll arrive at a small green pond around 9,000’.  Here the trail gets a little tough to follow again; the trail proper mostly swings across the ridge crest to the right (north) side of the ridge, but take whatever route you want while avoiding the mostly reasonable brush to crest to Bradley’s broad summit.

Try to follow the same path back down.  If you lose the trail then keep going in the same south/sse direction and you should be fine.  Pick up any game trails that you may see that may aid your progress downwards.  You can see the Greys River Road below during most of your descent, so use that as a bearing.

Approximate distance is probably around 2-3 miles one way, 3,300’ feet of gain, assorted class 1 or 2 depending on how well you can follow the trail.

The low perch on a clear day would offer up amazing views of the Wyoming and Salt River Ranges to the south, the Snake River Range and the Tetons to the north, the Caribou Mountains in Idaho to the west, and the Gros Ventres and possibly even the Winds to the east.  I was there on a hazy day so unfortunately there were no views of the Winds for me, and the other ranges at times were merely blurred outlines, but I'd imagine on a clear day perchance even the Absarokas would be visible.

There's plenty of official and unofficial campsites nearby along the Greys River Road.  You can probably car camp along any turnoff in this area too.  Motels are available not too far away in Alpine, as are food, gas, and other necessities. 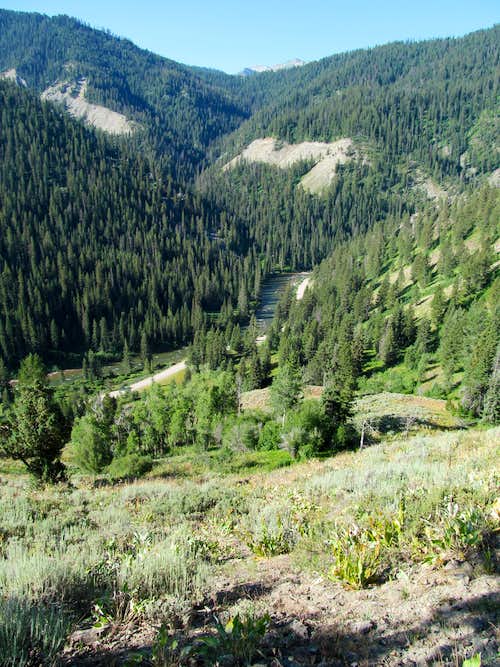 Greys River and namesake road below
This is bear country.  Grizzly Bears sightings are possible but probably rare in the Wyoming/Salt River Ranges, but bring bear spray anyway, since black bears inhabit these ranges too.  The route can be brush so I'd advise long pants.  There's not a lot of nature water along the route once all the snow's melted, so make sure you have enough too to last you all the way up and back to your car.  A compass and GPS aren't necessarily necessary but would be useful, especially if trying to find on and off again faint trails through brush isn't quite your forte. 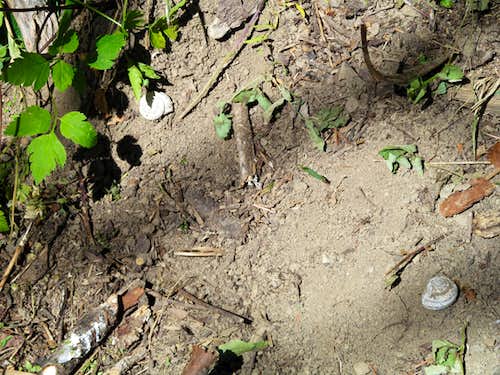 Shells along the trail
Spring through fall are likely the best times to climb this peak.  I'd imagine due to its lower elevation as well as the southern aspect of this route, you might have snow free conditions earlier than some of the higher surrounding peaks.  The Greys River Road isn't maintained in winter but I imagine if you were determined enough you could snowshoe the approach in.  Sticking to the ridge crest along your ascent may help you avoid avalanche terrain. 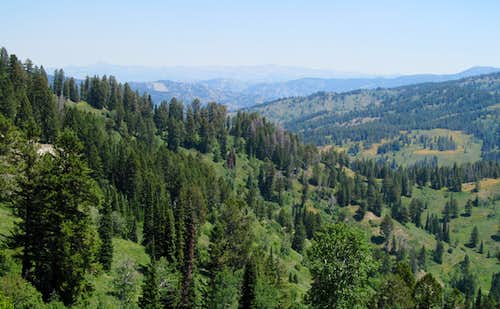 Gros Ventre Range from the trail