A Hard January - And A February Weekend Break

It had been a hard winter for my family.  My wife Deb had surgery to treat a second round of breast cancer in early January.
This was in the midst of my son Evan missing most of the school year with severe migraines, and my daughter Hannah’s continued emotional wrestling with her cerebral palsy and learning disabilities.  A week after Deb’s surgery and in the midst of a stressful project at work, a massive back spasm put me on my back for about 10 days.

Once February rolled around, and everyone was in various stages of healing, Deb green-lighted a mental health weekend for me, to get more exercise and relax, two things the lack of which had contributed to my back problems.  I almost did not go – there was lots of work to catch up on at my job, and I would have to take a Friday off to make it work.   But I badly wanted to snowshoe at some point this winter, and I pulled the trigger lest Spring melt my chances.

My first day of a decision to head up to the Apostle Islands National Lakeshore for a weekend of snowshoeing had already paid off in spades.  [See my trip report Sea Caves by Snowshoe]

Now for my second day I was actually not expecting more than a pleasant day’s exercise, snowshoeing along the shoreline of Wisconsin’s Big Bay State Park.

Like the ice caves, the road to Big Bay state park is dependent on Lake Superior, for this park sits on the east end of Madeline Island, one of the largest of the Apostle Islands.  Normally serviced by ferry, during deep winter the island can be reached from the mainland only via the state’s only official ‘ice road’, an approximately 2-3 mile route across the glazed surface of the Lake Superior ice.  I had prudently chose a Pontiac Vibe as my vehicle rather than borrowing my son’s larger, heavier 1992 pickup (I had heard that only cars and light trucks should make this run).  I have to admit that I was looking forward to driving my car across this more than the snowshoeing itself, figuring it would be just a walk in the woods. 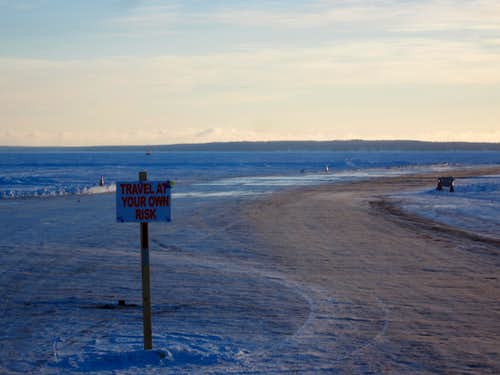 The drive was fun, even at the 15 mph speed limit.  But I would be unexpectedly blown away by the big scenery awaiting me 20 minutes later. Starting at the Big Bay Overlook and working around Big Bay Point, I would hit stunning views of LakeSuperior’s icy impact on this less sheltered, more exposed island coastline.  I stopped often to pull out my metal camera, which at about negative 8 degrees F started to seriously threaten to freeze off my fingertips, then my fingers.  I had to deploy hand warmers in my gloves or I would have had to stop taking shots or turn back. Really I could have foregone snowshoes on this well beaten snowpath, except they were essential when I would move out on a point closer to the cliffline to take shots. I was lit up – but this was only the beginning. 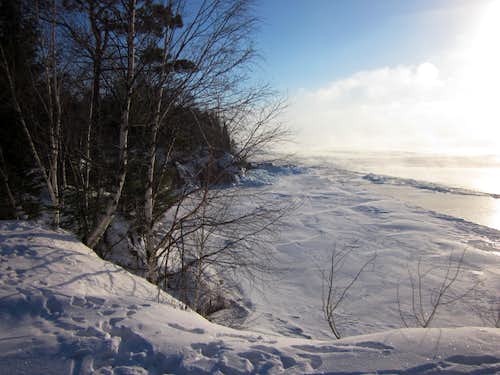 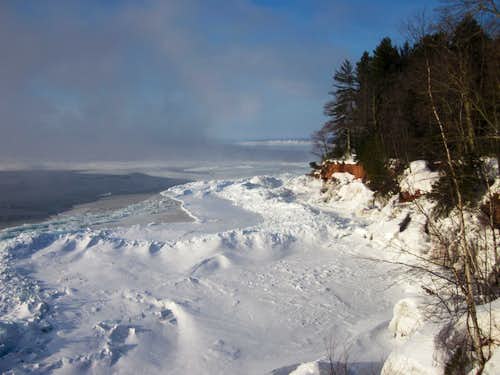 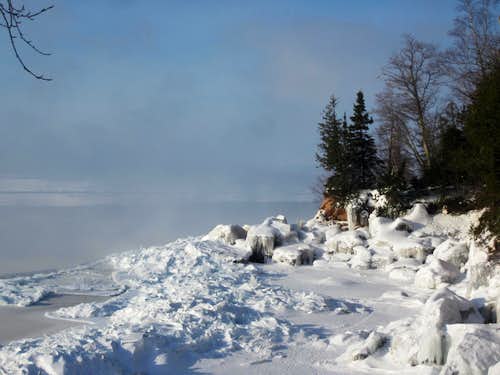 As I made my way on the well packed trail, I started coming upon huge piles of broken ice flows, pushed up onto the coast.  These piles of broken ice appeared to be about 4-8 inches thick, but the thing that turned the views from beautiful to extraordinary was the blue color of these shattered ice slabs.  I figured that they represented lake ice crushed and thrown to shore by the icy power of the lake.  With the wind sending sparkling ice crystal clouds on this sunny day, I could only boggle and take pictures.  If I was lit up before, I was ecstatic now. 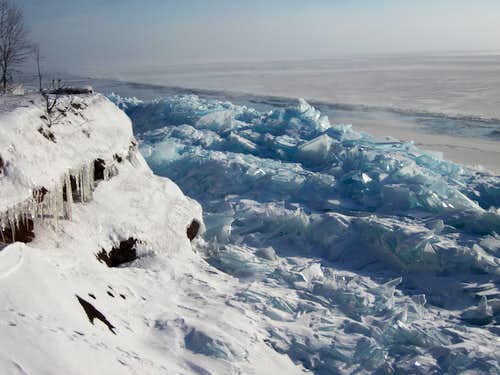 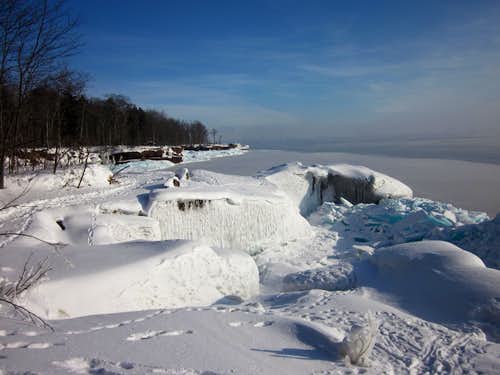 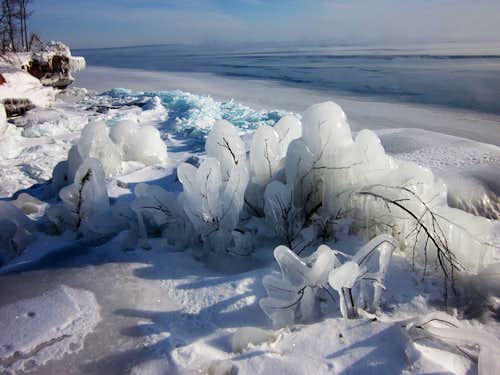 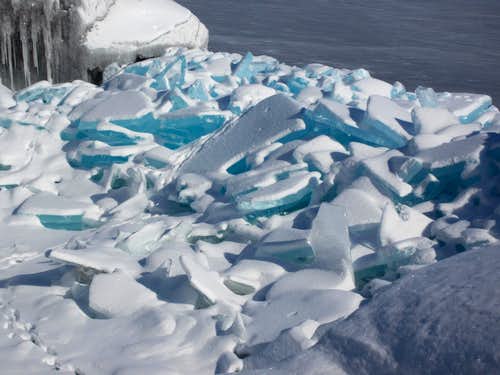 Soon I rounded Big Bay Point and started bending North and West around Big Bay itself, which was much less scenic but was harder snowshoeing as I was at one point breaking virgin ground along the bay ( I had seen only a handful of people all day).  I also started to hear distant booming which I first attributed to jets, then realized that the ice was beginning to ‘talk’. 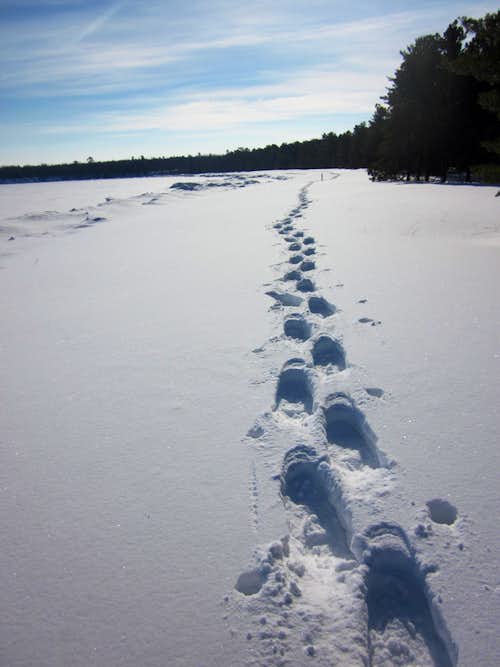 I turned around after traveling part way around the bay.  The ice crystal breeze had ceased,revealing some of the other Apostle Islands.  As the day wore on I would see, and hear, Lake Superior flexing its muscles on the less sheltered, more exposed southeastern shoreline of Madeline Island.  The booming had become continuous, a popcornlike series of knocks, shots and thuds, interspersed by the sounds of cracks zipping across the ice.  Sometimes it would sound like a load of clay tiles or lumber had fell over.  And the views – oh the views, now sunlit, were breathtakingly beautiful. 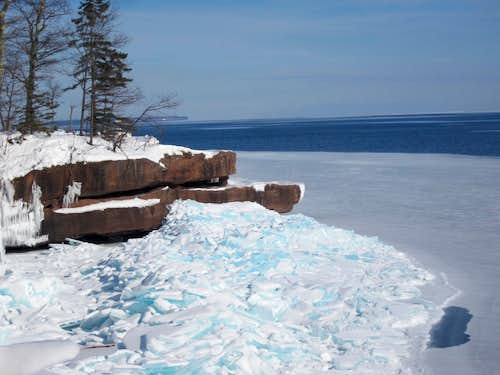 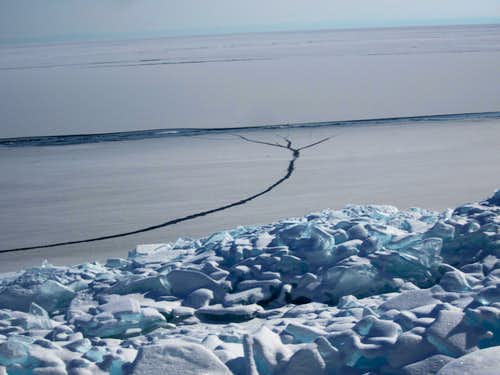 What a day!  A multi-sensory experience I will never forget. I had expected Northwoods Wisconsin and got the Arctic Circle with the Northwoods thrown in. I had a smile on my face that would light up the upcoming week. My ragged spirit felt like God had given it a special, sapphire encrusted valentine.  And to think I had almost stayed home and went to work!

After what I saw on the other side of the island, I was a little worried about the drive back across Lake Superior.  It was no problem.

By the next afternoon I would be back with my beautiful, understanding wife and facing the problems of the day. But they were now a little lighter and less consuming, and I had strength for it. 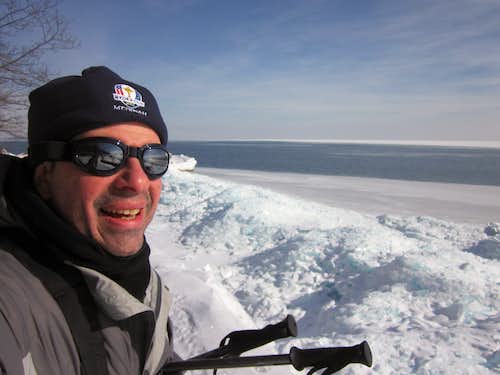 So sorry to hear about your troubles!

You definitely needed to get out and find some quieting calm and beauty in the outdoors! And what a unique experience - an ice road and amazing ice formations. Hope your time away gives you a long payback!

Re: So sorry to hear about your troubles!

The time away is already paying dividends. Thanks!

Thanks for sharing and mainly good luck to you and your family.
Aranka