What's New on this Page?

Brenta Alta Normal route goes across the South side, in front of the refuge "Pedrotti". Usually, this way is used by the climbers which had climbed the North wall of the mountain that hosts the most difficult and important routes. The Normal route allows to reach this nice summit without important difficulty. The astonishing 360° point of view from there, worth the hassle and the risks. However the ascent requires to overcome rocky passages of I/II (a passage of III) and to walk on very steep gravel slopes. It hasn't particular difficulties, but it's very easy to loose the way (especially in the afternoon fog). Follow always the cairns! Most of the time the rock is friable (warning!). Helmets is recommended and a rope would be necessary for a couple of rappels; 30m are enough (rappels are indicated in the photo by a red arrow). The route starts from the notch "Bocca di Brenta" 2553m, reachable from the refuge Pedrotti or the refuge Brentei. The rocky parts are 3 divided eachother from 2 gravelly slopes. Good information about the conditions can be given by the keeper of the refuge Pedrotti. 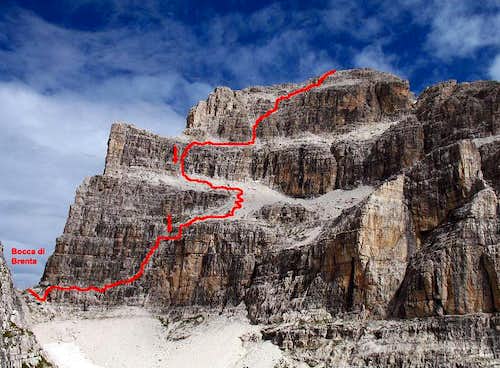 Ascent: From “Bocca di Brenta” 2553m, follow the path that goes down for few meters and keeps the base of the south wall on its left. Avoid the close path on your right, that points to the centre of the slopes because it takes to a water source. Anyway few stone piles indicate the right way.

After more or less 50m, a rocky couloir is clearly visible in front of you; it takes up to the first slope.  It’s better to keep the right side (your) of the couloir.  The middle of it, is the most difficult passage of the route (III). After that, a ledge on your left permits to overtake the rest of the couloir, and than climb easily until the end of it (big stone pile, to remember for the descent). 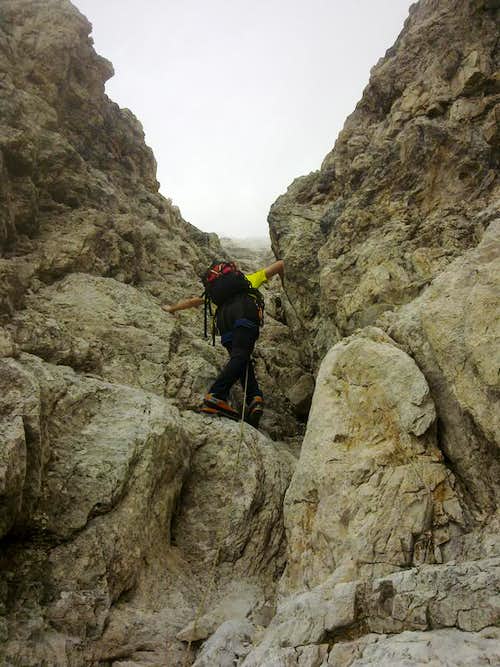 At the begin of the couloir 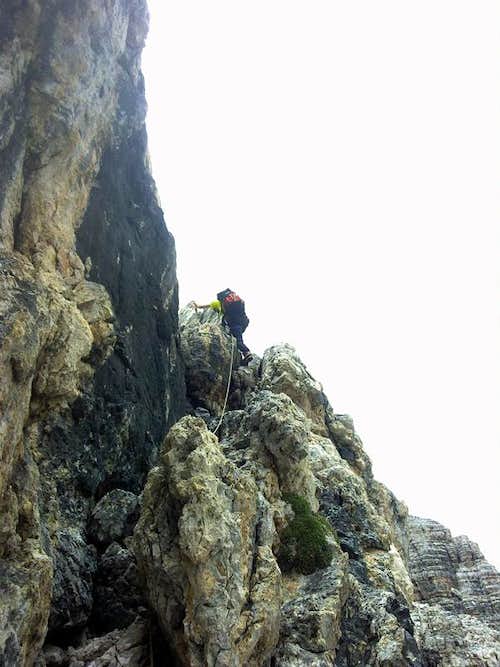 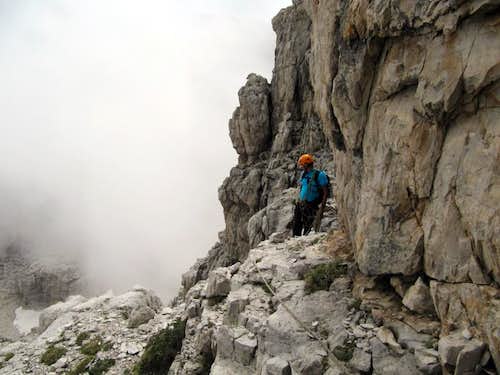 The begin of the route
Now the rest of the route will be clearly visible. Same tracks of footsteps lead above the slope with a left direction, until the foot of the second wall.
The right point wherefrom start to climb is difficult to identify. The solutions are many.  A couple of rappel slings indicates the easiest way. They are in dark color because very old, not easy to find out. The wall is high 40/50 meters with passages of II. 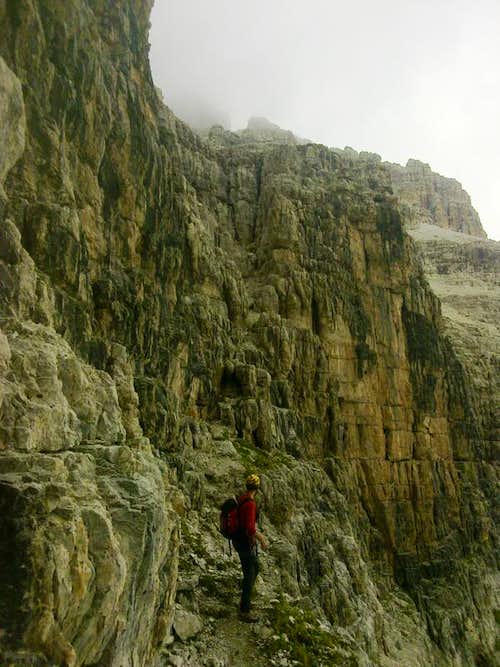 On the path at the begin and the couloir 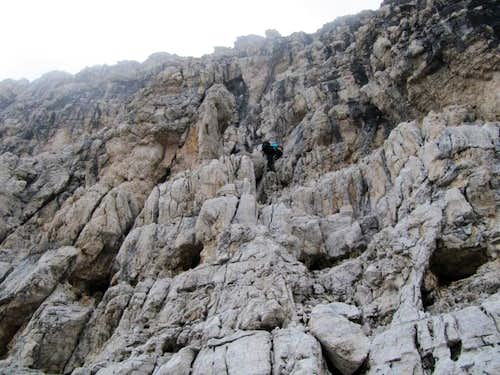 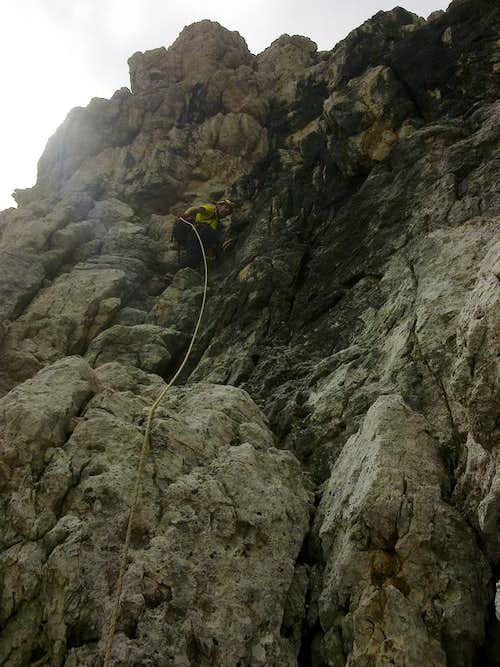 Climbing the second wall
Once the wall has been bypassed, a second slope leads to the last rocky part, which is the easiest one but with rotten rocks. Same footsteps on your right side take till the begin of a big couloir, with a Y shape.  It’s possible to climb it in both ways, but probably the right side (your) has the rocks less crumpling. At the end of the couloir, the slope decreases, and same easy passages take to the summit. Book for signatures on the top. 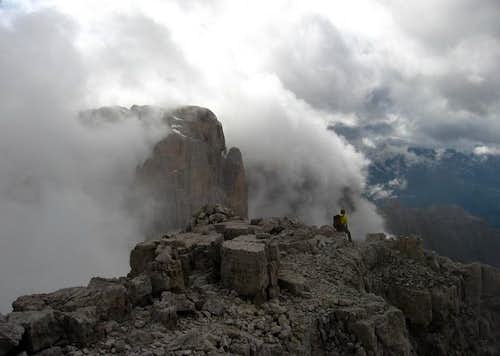 The summit with Cima Tosa in the background 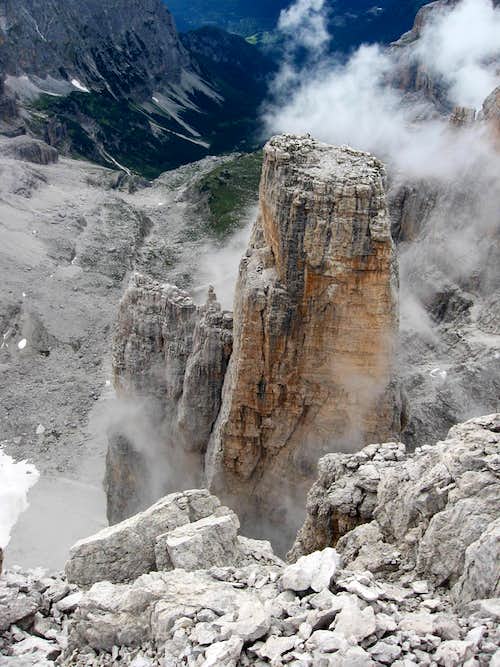 Campanile Basso seen from Brenta Alta. A climber is visible on the top
Descent: During the descent, follow the same route. The only difficulties, is to find out the two rappels point. The first is hard to discover. There are at least 2 anchor sling very close from eachother, but quite hidden. One is green and one is black. I personally discovered the black one.  Once seen it, no problem for the rappeling. For the second rappel point, follow the footsteps on the second gravelly slope (second for who descent) till the edge above the last wall. The point is 10 meters on the right side of the big stone pile aforesaid (the one on the top of the couloir). 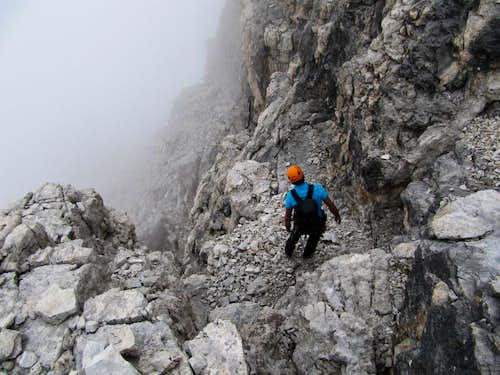 Trying to find out the right way in the fog 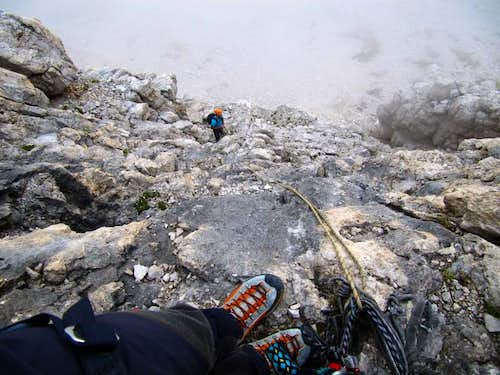 The best period is the summer season