Brienzer Rothorn from the N (by Eisee)
Switzerland, Europe

Brienzer Rothorn from the N (by Eisee) 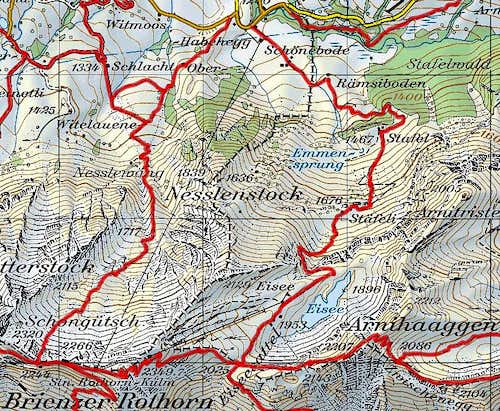 This is a static map, a dynamic one is here
On one hand this route in fact does not need any description - because it's simple and self evident. On the other hand it's a very nice and popular hike, so why not bringing it to attention of potential visitors' of this nice panoramic mountain? And of course, this route is very often used for descent only - people get early in the morning on top of Brienzer Rothorn with cable car and after enjoying the broad panorama simply descend in less than 2 hours to their cars. This descent route is popular also with mountain bikers, who can also get on top with cable car and then only drive down and with tour skiers, doing the same.

There are two usual, marked routes on Brienzer Rothorn from the north, from Soerenberg. The western one gains the summit ridge on the saddle 2244 m, west of the main summit. Our route is the eastern one, going over Staefeli alpine pasture and passing the nice Eisee.

The route goes all the time by good, marked paths, a lot of it even by a steep mountain road, closed for public traffic. From Eisee hut on it is only a marked path. Close to the summit there are some steeper sections, but the path is broad enough. On the Swiss Scale for Hiking Tours its rating is T2. Time needed: 2 hours 40 minutes (for 1110 m of altitude gain).

See also the GPX track in the header!

See the parent page how to get to the big parking place of cable car, which goes on top from SE of Soerenberg! One option is from the north, from the main road, connecting Bern and Luzern you drive south by the valley of Waldemme river. The other option is from the east, from Giswill and over Glaubenbielen saddle. The parking place lies on Schönenboden, 1240 m.

From the parking place you continue in the SE direction towards Stafel. First there are open meadows, towards the end of them (after Raemsiboden restaurant) you have two options to continue. The road continues a bit steeper to the left, while a nice marked path goes right. It soon crosses below a small waterfall the stream of Emme, then goes in curves through the woods up and just by the sources of Emme (Emmensprung) reaches on the meadows of Stafel, 1467 m. There you hit the mountain road again.

On Stafel meadows
From Stafel the narrow mountain road goes towards the south. In a few turns it soon reaches the upper alpine meadows - Staefeli, 1676 m. By the hut you continue in the SW direction - towards a well seen rock barrier. When hitting it, the road turns left below it, using a narrow ledge. Then it turns completely towards the east, soon ascending out of the steep zone. There you just go around the grassy bump and there is already Eisee, a nice lake, lying below the steep northern slopes of Arnihaaggen. The altitude of the lake is 1896 m, but the path crosses its northern shores some 50 meter higher, until reaching the hut of Eisee, 1953 m.


In front of you, towards the SW, you already some time see the summit of Brienzer Rothorn. From Eisee hut towards it a chair lift goes, but you will probably walk on. A nice path continues in the SW direction. By a shallow valley you soon ascend on its top, on Eiseesattel, 2030 m, the saddle in the main ridge which divides Arnihaaggen from Brienzer Rothorn. A fascinating panorama opens towards the south and south-west!

On the saddle you turn right, continuing by the main ridge. That one is at fist grassy and broad. It soon brings you below the upper station of the chair lift. From there on, the path continues by sharp turns. The slope is very steep, but the path is broad and well beaten, in a few places also a nylon cable protects hikers. After some 125 meters of altitude, you are already just south below the summit panoramic platform. You gain it by a short ascent.

You can ascend by this routhe Brienzer Rothorn any time of a season. It is also a popular ski tour route - again, the majority of skiers probably come on top by cable car. If snow is hard or even icy, the upper 150 meters may require additional equipment (ice pick and crampons). In summer you need only good shoes and eventually poles.