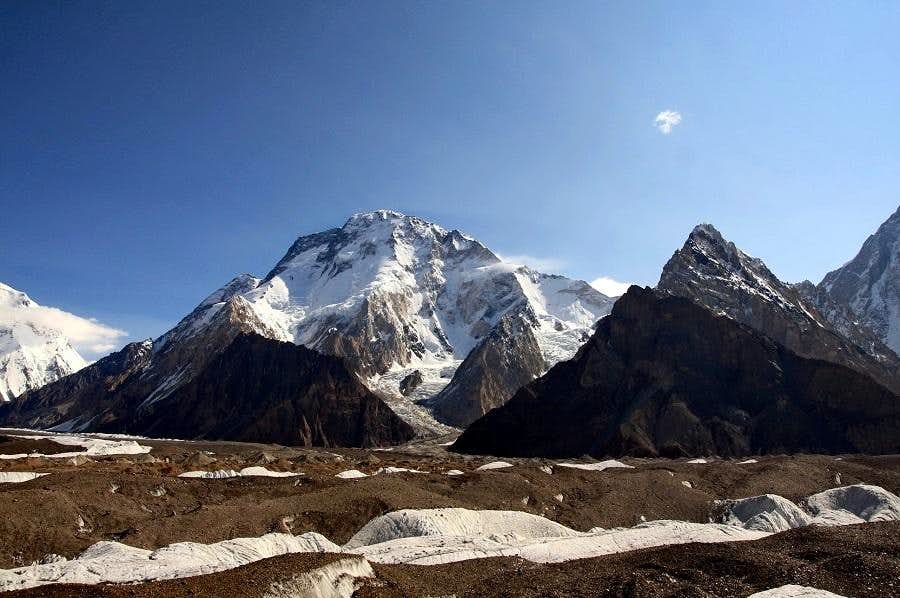 The name of Broad Peak introduced by W.M.Convey a British explorer during his expedition in 1892. In Balti language name of Broad Peak is Phalchan Kangri(Falchan Kangri.),because of its breadth at the top.The height of Broad Peak is 8047-M / 26,401 ft. In 1954 Dr.Karl M.Herligkoffer of West Germany tried to climb it. The party made an attempt however did not meet with success because of a storm and a very low temperature. Austrian expedition came to Pakistan in 1957 to climb this peak. It was lead by Marcus Schmuck with Fritz Wintersteller, Kurt Diemberger an Austrian climber and photographer and a legendary mountaineer and Hermann Buhl, who is considered on of the best known postwar Austrian climber.It began a reconnaissance of a ridge on the western face of the mountain. Consequently it climbed a snow gully and camped at 5791-M. On the 19th May 1957 all members of the expedition left camp III for an assault on the summit. A storm forced them to return to the base camp; It was however on the 9th June 157 that Marcus Schmuck, Fritz Wintersteller, Kurt Diemberger and Hermann Buhl climbed the peak without using O2 and high altitude porters. The name of the other peaks in the Broad range is Broad Peak middle/ central. In 1976 that a French Expedition led by Yannick Seigneur made an attempt on this peak in alpine style along with main Broad Peak.. This party of four folowed the Austrian first ascent rout an made four attempts but could go only up to 7925-M. The expedition had to come back because of bad weather.Spanish Josef Estruch with five members climbed Broad Peak (Central) in 1987. An Italian expedition which was led by Renato Casarottto attempted to climb Broad Peak North 7550-M in 1982 but was unsuccessful. Casarotto however succeeded in climbing it in 1983.
« PREV NEXT »

Thanks Karrar for sharing this beautiful image and also for the informations.
I want to add that Hermann Buhl, the man who first climbed alone Nanga Parbat - one of the greatest enterprises in mountaineering's history - died on Chogolisa a few days after his ascent on Broad Peak.
My best greetings!

Thanks Silvia for kind comments and information.
Greetings from Pakistan.

Interesting for me - I always pictured the other side of "Broad Peak" being massive, and... deep. But pictures from the north reveal Broad Peak as a thin ridge, with a steep drop on the other side!

Thanks again Big Lew, for checking out my photographs and for your appreciation.
Greetings from Pakistan.