Broken Top: Choss'aineering at its Finest

We elected to get an early start from the trailhead the next morning- we saw several parties lugging ropes and gear up the trail head on Saturday night and wanted to give ourselves the best shot at beating them to the actual climbing portion of the mountain.  We set alarms for 3:30am and were hitting dirt by 4am.  The hike into Green Lakes is flat and beautiful.  We saw none of this during the hike in since the sun wasn’t up until we were nearly at Green Lakes.

The trail is well marked heading up to Green Lakes and we had no issues with navigation.  However, looking at the topo and our GPS, it appeared that we would need to head toward Broken Top and meet the base of the Northwest Ridge after passing the largest of the lakes…. several miles later, watching the mountain disappearing into the distance, we realized that we had apparently missed the climber’s trail.  Once we finally hit the ridgeline, we found ourselves ambling along on mixed, second/third class terrain- mostly scrambling on occasionally loose scree, and we wound our way carefully up the mountain.  There are a few areas to rest off the trail and we stopped and regrouped, putting on helmets, at the base of a gendarme about 300 feet from the summit.  There was a party in front of us that was protecting the section with fixed ropes and prusiks and we made sure they were okay with us passing safely and quickly before heading up. 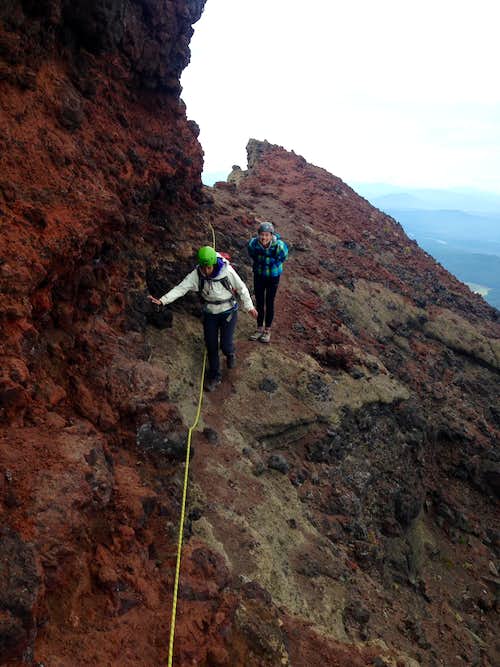 The main crux of this climbing is a section of (surprisingly solid) 5th class rock that consists of a few 5.easy moves before traveling along a few hundred feet of EXPOSED 4th class rock to another short stretch of 5.easy climbing before reaching the summit- which is large enough for a large group to sit on. 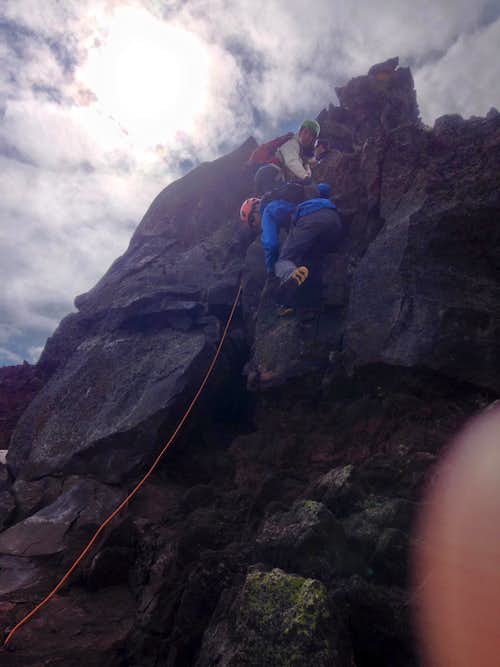 We waited for the slow moving group to summit, took some photos, and headed back down after making sure that they next party was out of danger of rock fall (if we were to cause any) and was aware that we would be descending. We regrouped at the gendarme and headed back down, finding the correct climber’s trail easily this time, which we marked  with a cairn on our way out in hopes of helping other wayward, overly excited climbers find the most direct route to the ridge.

Overall, Broken Top offers a straightforward climb- anyone with experience choss’aineering in the Cascade Range will appreciate the variety of movement it presents as well as the beautiful views of the other mountains in the area.  The third-class ridge has sections of exposure but felt more stable than the scree/rock on peaks such as South Sister, Mt Washington, and 3 Fingered Jack, and the section of climbing at the top was fun and offered a taste of exposure to those willing to venture onto it- with or without protection!  Please be sure to have good etiquette on this climb since it sees a fair amount of traffic and a lot of people elect to protect portions of it.  Remember: communication is key both within your party and when discussing your plans with other parties.
For additional information, including more photos and stats, check out this post.