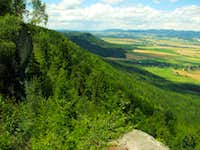 The scarp
In a nutshell, the area which is known as Broumovské stěny (Broumov Walls) is an extension of the Stołowe Mountains. Basically, it is a cuesta, extending from SE to NW, whose escarpment drops into the Broumov Basin. The highest point of this escarpment is located on its SE end. It is called Koruna (Crown) and has an elevation of 769m. However, the highpoint of the Broumov Walls is Božanovský Špičák at 773m, which rises about a mile away from the scarp, somewhat hidden inside the more structurally complicated southern part of the Broumov Walls. Both Koruna and Božanovský Špičák are close to the Czech-Polish border and are less frequented than what is thought to be the biggest attraction of the area, namely a canyon named Kovářova rokle (Blacksmith's Gorge) and its vicinity situated in the northern part of the Broumov Walls.

Northern Part (in the eyes of a Frenchman) 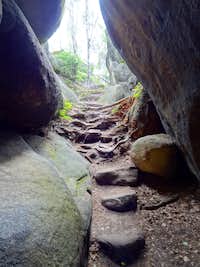 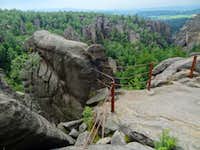 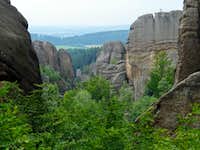 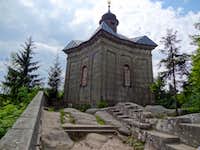 Chapel of Virgin Mary on Hvězda 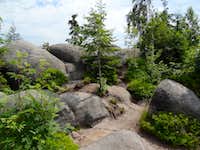 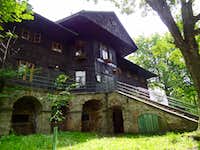 It is a cracked plateau, a flat hill whose top we need onto. In some places tall monoliths like those of the Adršpašské skály stand vertically, lonesome. In some other places, stone walls bar access to mysterious, obscure nooks, where humans are rare visitors.

The range is shaped like a long stripe from the north-west to the south-east, with the south-east foreland being located slightly higher than the north-west foreland, like an ocean wave ready to break. The rock labyrinth near the mountain hut (Chata Hvězda) and the chapel of "Our Lady of the Snows" are the most popular with tourists and they can get packed with them, but Broumovské Stěny cover a really huge terrain, where fantastic forms of rocky outcrops can be seen and where very few visitors are met.

Which leads us to what makes Broumovské stěny differ from the Polish Góry Stołowe or Adršpašské skály, in the positive sense: lying in the shadow of the two, it is not a national park, it is less advertised, there is no entrance fee, and one can savour the genuine atmosphere of these amazing sandstone rocky wonders without having to struggle with the crowd.

May I add that additionally, thanks to a wide network of trails of all sizes, Broumovské stěny can be visited by bike or in winter on skis, which is not often possible in the other sandstone labyrinths.

Having visited Broumovské stěny only once and by a means of transportation mentioned above, I am not pretending to be an expert on the area and I don't know the names of the rocks by heart. Some of the rocks cannot be climbed (I saw prohibition signs) but some certainly can. Anyone willing to enrich this page with additional information will be granted editing rights with pleasure. 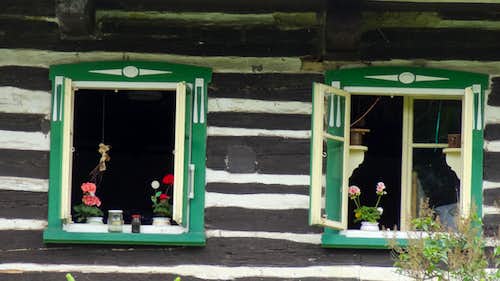 The southern part of the Broumovské stěny contains their highest summits as well as a stunning rock arch known as Kamenná brána (Stone Gate).

The summit of Božanovský Špičák - at 773m the highest hill in the Broumov Walls - boasts several rock formations making up what is known as a "zoo" as well as providing views toward the Stołowe Mountains, southeast from Machov Pass (which sits at the foot of Božanovský Špičák). However, a much more attractive summit is Koruna (Crown), at 769m the second highest hill in the Broumov Walls. This is a captivating mountain, especially while viewed from the southeast. It rises over its foot by more than 300 metres (which means that it is actually taller than the highest summit nearby, Szczeliniec Wielki in the Stołowe Mountains), sports precipitous cliffs (and towers on its southwest side, visited by rock climbers), offers good views both north (across the Broumov Basin, towards the Javoří/Suche and Sowie Mountains) and southeast (towards the Stołowe Mountains) and has a nice patch of silvery beech woodland on its slopes.


Near the summit of Velká kupa (708m), about a half-hour walk west of Koruna (see the map in the Overview) sits one of the most interesting of the countless rock formations scatterred throughout the Broumow Walls: Kamenná brána, i.e. Stone Gate. The rock window is about 5 metres wide. 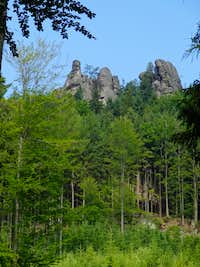 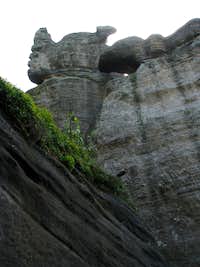 In the "zoo"
on Božanovský Špičák 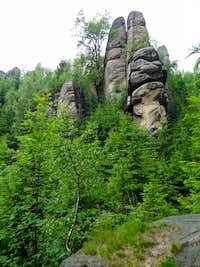 Along the trail
to Nad Rokli 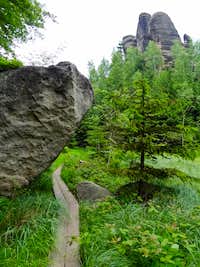 Peat bog
in Skalní divadlo
The place is located in a remote corner of Czech Republic protruding towards Poland. Hlavňov is the village that needs to be reached if one wants to get to the main attractions of the northern part. It can be reached via the town of Police nad Metují. Police nad Metují is best reached from Poland via Wałbrzych and from Prague via Náchod as shown on the map below.

Convenient starting points for the hiker willing to explore the southern part of the Broumov Walls are Slavný or Božanov in the Czech republic, and Karłów or Radków in Poland. 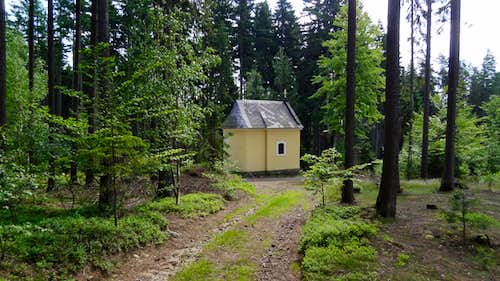 Camping is forbidden except for campsites like this. But there are a number of guesthouses at the villages.

Rock climbing is allowed in several designated areas, mostly from 1 July to 31 December. To go climbing legally, you must be a member of a UIAA organization as well as observing some special rules for climbing in sandstone areas.

A good paper/waterproof/digital 1:30,000 map, which also covers nearly all of the Broumovské stěny, can be purchased here. 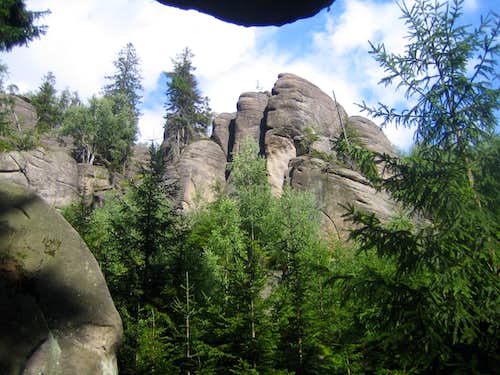