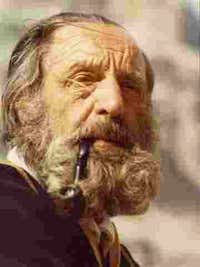 An old Bruno Detassis
On 8 May 2008 Bruno Detassis died at his home in Madonna di Campiglio. Aged 97, he was one of the all time greats of mountaineering.

There are moments when perhaps one shouldn't write, or rather, one would prefer not to write. Because words fails to fully "comprehend" and represent a loss. There is the profound and indescribable pain of the family and friends which seems to go right to roots of life and the heart. And there is also that sensation of feeling slightly more alone which, at times, affects even those involved indirectly.

This doesn't always happen. On the contrary. In these increasingly cynical times where society continues to look inwards towards itself, it seems as if this perception of shared pain, of collective participation, is becoming an increasing rarity. But for Bruno Detassis this is not the case. One thing is certain: there is no mountaineer, walker, mountain lover who has not lost a small part of his or her dream.

There are many answers to this. Bruno Detassis was certainly one of the greatest mountaineers and climbers in the Dolomites, and not only. The routes he first ascended, above all in "his" Brenta Dolomites stand testimony to his ability. They are routes (such as La via delle guide on Crozzon di Brenta) which seem to have a soul. They have a touch of elegance and beauty which can be found in Detassis himself. His straight glance, that beard which framed his face were the mirror of an inborn nobility, a nobleness which stemmed from the heart. And he loved the mountains like few others.

A younger Bruno Detassis
Detassis chose the mountains a distant times. He chose to do so completely, becoming the "Guardian of the Brenta." He will be impossible to forget. He always shared a word with the many mountaineers and hikers who passed by his Rifugio Brentei. He looked at all of them. And he gave them all equal consideration. He will be impossible to forget: his positive energy will always be felt amongst the Brenta mountains. 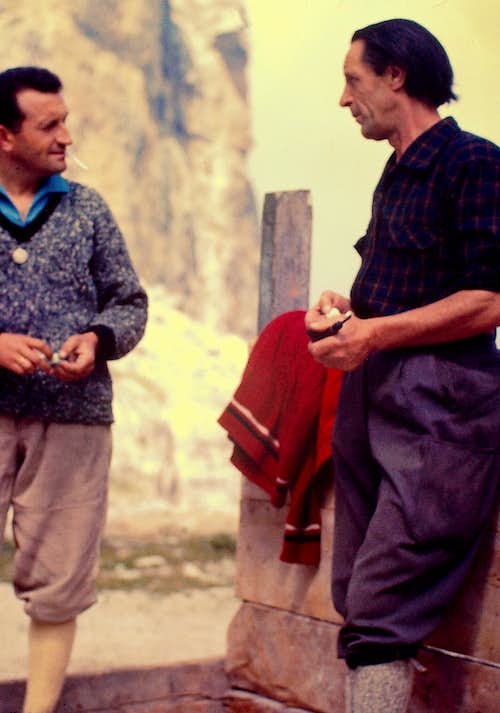 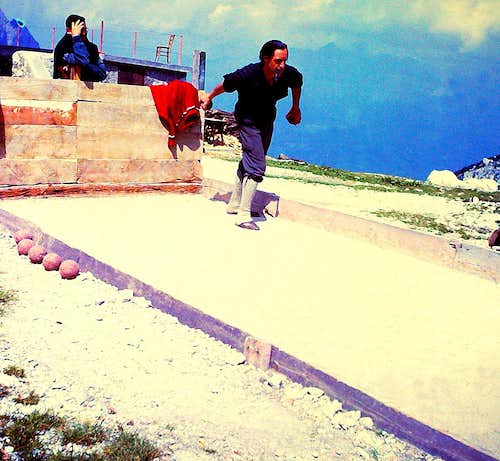 The best: Bruno climbing at 81.

Today I'm extremely sad. Yesterday a Great Man left us. Great Bruno Detassis has terminated his long life on earth. Last night he had dinner and, unlike other days, drank two glasses of wine instead of one. Then he had a smoke and shortly afterwards went to bed. He left us just as a candle flame extinguishes, serenely. This is what his son Claudio told me.

Bruno and I were good friends. What sprung to our minds in the past will continue to do so in the future. When you talk of "morra" you always refer to Bruno. When you go to the Brenta Dolomites you always talk about him. When you looks at Cima Crozzon he's always there. If you climb Campanile Basso, Detassis is always mentioned. And this will continue to be the case because Bruno has left us in body, but not in spirit.

I remember when I walked past the Brentei Refuge to climb on my own. He asked me where I was heading. I told him I didn't know. And he answered: "You don't know but I do!" Memories etched in my mind. He was 80 when we reached the summit of Cima Presanella together. It was an unforgettable moment. Or two years later when together with Andrea Sarchi and Mario Bertamini we climbed Spigolo della Madonnina on Brenta Alta. Incredible!

Ciao Bruno, you’ll always remain in my heart and I'll take you to the mountains with me. Thank you for everything you gave and taught me. You were a Great Master, the King of the Brenta, now and forever. Ciao, a tender embrace like the one we gave each other a short while ago.

Bruno Detassis "the king" of Brenta with Georges Livanos "Le Grec" at Brenteï 1959
.

In 1962, Georges Livanos, Il Greco, made two attempts on the Cima Tosa of the Torre Gilberti with Bruno Detassis, Marcus (Marc Vaucher) and Baffo (Roger Lepage). Bad weather forced them down to the Brenteï refuge. It is then that Bruno refused to go for a third attempt, which was to be successful, giving the following reason:

"I have never put a foot on an étrier, it is not at my age (52 years old then) that I will start". This style of climbing, using aid and many pegs was not to the taste of Bruno, the pure "libero"!

Sonia (Sonia Livanos) remembers that at Brenteï, Bruno always had a pair of binoculars which he called: "il biocolo della verita" with which he was following the climbers' progression.

Georges and Sonia livanos admired Bruno as a climber and remained very close friends until his death.

Bruno with Il Greco and members of his family
To celebrate their 1rst ascent of Cima Tossa, Bruno's wife prepared a big and nice cake which was shared with Bruno's family members.

I joined in 2 rescue operations with him and his brothers Catullo and Giordano, after them each time I came to Brentei I had a special treatment, like a friend ...