Buffalo Fork Peak-- The Edge of This World 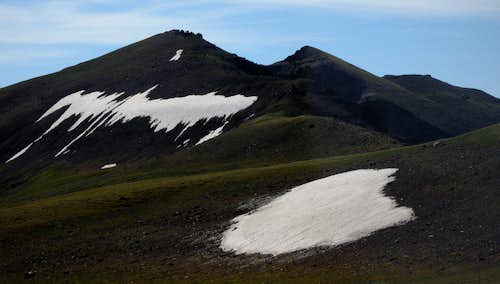 Buffalo Fork Peak and tundra heaven
From the north and the east, Buffalo Fork Peak looks unclimbable, especially when you know about the rock that makes up its cliffs, to all but the incredibly talented and the incredibly insane. There is an east-face couloir leading directly to the summmit that seems, from above, to be passable, maybe best tried under good snow conditions, but most mere mortals will try the summit in a more roundabout way, which means at least 5-6 miles (one-way) of mostly hiking but some scrambling and, of course, treacherously loose rock in all the wrong places. And it is in, as another SP member once put it to me, "Bear Central," referring to the healthy population of grizzlies in the area. Fresh tracks on one of the approach ridges confirmed that description. Last, add in the fact that Buffalo Fork Peak is in an area that sees very little human traffic, meaning help ain't coming too soon if you get in trouble, and you have a mountain that most people would rather skip.

Well, Mike and I thought it sounded great.

We met Jay, the author of the Absaroka Range page, at Togwotee Pass at 6 A.M. Jay, while updating his Absaroka and other pages about two weeks before my departure for Wyoming, had come across some of my attachments to them, and we'd been conversing about the mountains and discussing the possibility of a climb together. So the three of us headed to the trailhead, got our packs ready, and set off.

Buffalo Fork turned out to be everything I love in a mountain. A ridge traverse leading to the mountain itself let me find a little fun Class 3 scrambling. The "crux" of the route, which is 2+ but seems much harder because of how steep and loose it is, quickened the pulse a bit. Cliff edges yielded precipitous drops and caused that mix of fear and awe one feels when leaning over such edges. Tundra meadows filled with colorful wildflowers created an impression of some kind of alpine heaven.

Buffalo Fork Peak is the edge of the world in a way. In one direction, there is the comfort of the familiar world-- a highway far below but not really very far away, the unmistakable profile of the Teton Range looking small and distant but not much unlike the roadside perspectives that grace calendars and advertisements. But a 180-degree turn shows a remote mountainous world that few see and fewer venture far into-- the Teton Wilderness, which lends itself more to expedition-style travel than in does to brief incursions. Visible out in the middle of it all, beyond the Teton Wilderness and deep in the equally wild Washakie Wilderness, is Younts Peak, supposedly the most remote mountain in the Lower 48. I'm not much into backpacking anymore, but the 3-5 days it would take to hike in, climb Younts, and get out again would absolutely be something I'd be willing to endure. I can imagine few mountaineering experiences that would be more satisfying to me, who loves remote mountains in the Rockies above all other mountains, than standing atop such a mountain. Someday...

After the climb, Jay took off for Lander and Mike and I headed for Grand Teton National Park, where we would be spending the night at Signal Mountain Lodge. Come dawn the next day, Mike and I parted ways, he back to home and the Bitterroots and I for a day of hiking and scrambling in the Tetons before a turn south for more wild Wyoming lands. We had spent three excellent days together exploring the Absarokas, though, and were already talking about "next time." 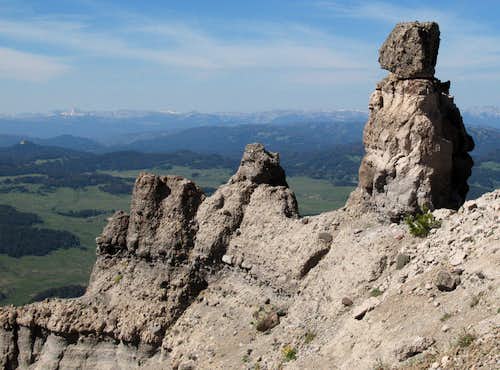