The Buila-Vânturariţa massif, a conspicuous ridge of the Căpăţânii Mountains sitting in their south-eastern part south of the main ridge and stretching from NE to SW for approximately 14 km, does look odd against the background of the bulk of the mountains, which are one of the major components of the Parâng group (which in turn comprises a major unit of the Southern Carpathians). Most of the main ridge of the Căpăţânii as well as their lateral ridges west of Buila are made up of metamorphic rocks. This results in a rather monotonous, fairly gentle relief. In contrast, the Buila-Vânturariţa ridge is made of limestone, which yields a jagged skyline, rugged cliffs and a plethora of karst features. In fact, the whole northwest side of the crest is cliffy, whereas the eastern slopes are gentler.

At Claia Strâmbă (1379 m), on the southern side of the Cheia gorge, begins the Buila-Vânturariţa ridge proper with its numerous summits, of which the most distinctive are: Vânturariţa II/Mică at 1655 m, Vânturariţa I/Mare at 1885 m (the highest peak), Vioreanu at 1866 m, Stevioara at 1847 m and Buila at 1849 m. The relief is most varied in the northeast. The main ridge trail between the pass known as Curmatura din Oale and the summit of Vioreanu is very poorly waymarked, difficult to follow and recommended to experienced scramblers. The path descends the gullies and winds through shrubs resulting in problems with orientation. Beyond Curmătura Builei (Buila pass, 1540 m), at which the characteristic crags of Hornurile Popii stand guard, extends the southwest stretch of the main ridge, which tops out at 1643 m. Past that point (Vârful Piatra), the relief is becoming more and more monotonous. The southwesternmost segment of the Buila-Vânturariţa massif, between the gorges of the Costeşti and Bistrița rivers, is called Muntele Arnota and does not exceed 1184 m.

The table below lists most of the major summits of the Buila–Vânturariţa massif.
One of the most impressive karst features is the rock arch named Casa de Piatra (The House of Rock), located half a kilometre NW of Pătrunsa hermitage. 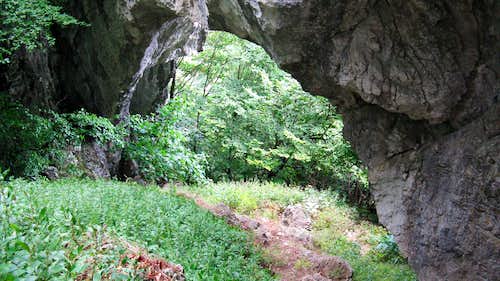 The House of Rock
The Cheia Gorge (also known as the Recea Gorge) is about one kilometre long, 300 m deep and – at its narrowest place – just two meters wide. Most of the time, the river is merely a brook, which cascades over limestone boulders, until at some point (Sorbul Mare) it disappears into a swallow hole to resurge several hundred meters away. The gorge can be traversed via a narrow path called Brâna Caprelor (Goat Trail), closed in winter, with an exposed passage elevated about 200m above the bottom of the canyon. 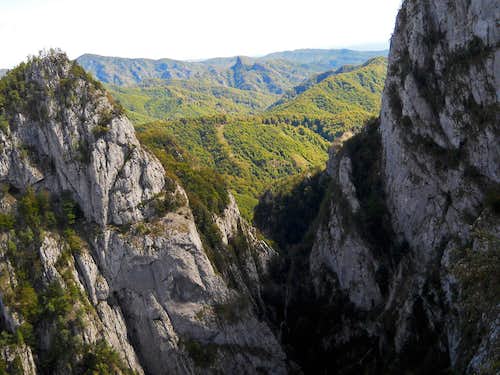 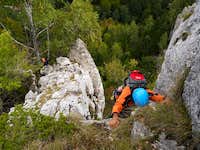 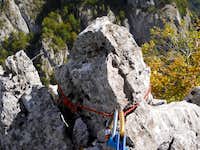 Rock climbing is concentrated on the walls of the canyons carved by the Olăneşti, Cheia, Costeşti and Bistriţa rivers. There are 76 climbing routes in 10 different areas. Details can be found on the national park's website.

On the southeastern slopes of the Buila-Vânturariţa massif, on the outskirts of the national park, sit the Pahomie and Pătrunsa hermitages. A number of interesting Orthodox Christian monasteries can be found in the nearby villages.