Bull Mountain is one of the most prominent features of the Henry Mountains when driving in from the north. Despite that, however, there is almost no information anywhere on how to reach its summit. Michael Kelsey, in his book on the Henry Mountains and Robbers Roost (p. 162), simply says, “go straight up, finding the easiest route to the top.” He also states, “anyone can handle it.” Well, the latter bit probably isn’t true, but at least this means it’s possible without technical climbing. In fact, while the peak is every bit as grueling as it looks – nearly 2,000 feet of elevation gain in less than a mile – it’s not especially dangerous. Dense vegetation and thick boulder fields mean that while minor injuries are certainly possible, there is almost never any real exposure.

In Hanksville, simply follow the signs for “Henry Mountain Access.” This is the main road through the northern half of the range, leading to Lonesome Beaver Campground and Bull Creek Pass/Mount Ellen beyond. The road is maintained in decent shape, though you may want higher-than-sedan clearance as it can get rough in some places. Ordinary, low clearance cars with good tires could be an option, though you may have to get out at times to kick a large rock out of your way. 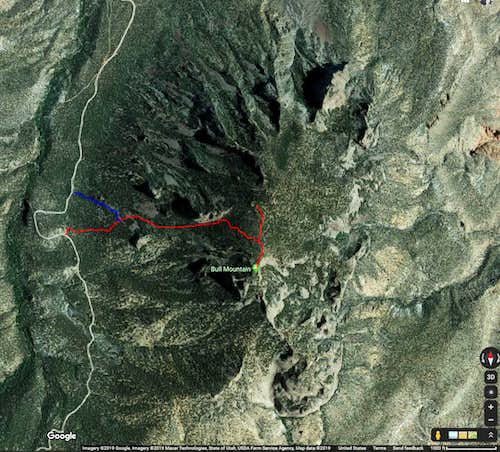 As the map depicts, I chose to park at a small pull-off just after the road rounds a small hill. That sounds vague, but you’ll definitely know when you’re there. It would also be possible to park at a cattle guard just before the hill (the blue line), though this route looked to be slightly steeper in the beginning. 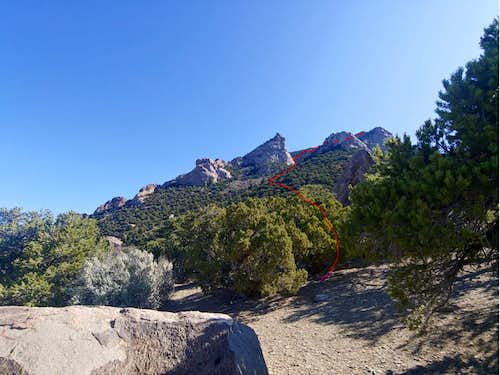 From the pulloff, the entire route can be seen. Generally speaking, you just need to ascend between those two rock formations at center, and then continue on to the summit ridge.

To explain in more detail, hike up and to the left (north) from this spot until you reach the landslide/boulder field at center. Follow that up into the gap between the formations. From here, there are a variety of options. However, I chose to hug the cliffside of the left/north formation. The thick vegetation and gully bouldering there made for very slow going, but it seemed better than the extremely loose soil on the slopes further south. When you reach the summit ridge, things get much easier. Just turn south and head to the top. 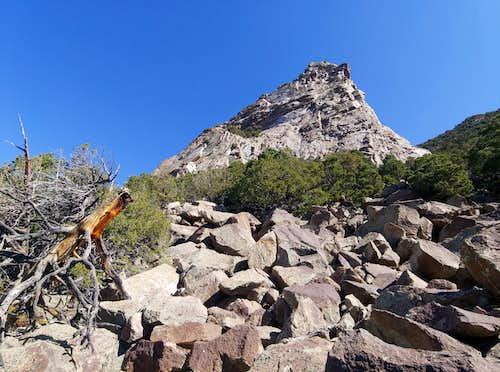 The boulder field and pinnacle up close. I got pretty scratched up while climbing through those trees, so I may recommend long sleeves for this hike. 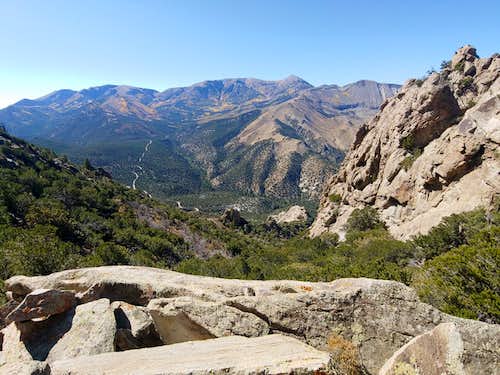 The route from above, looking down from a cliff band near the summit. These bands can just be traversed around with little difficulty. They are the last obstacle before the ridge. 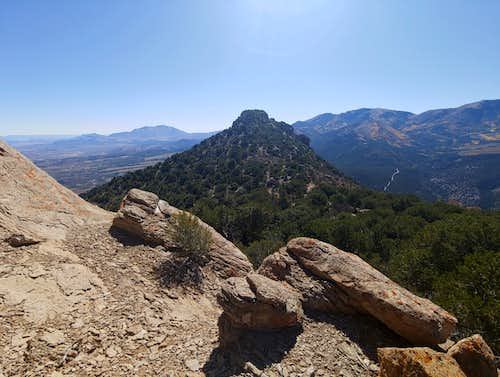 A view of the entire ridge, from the north looking to the south (and highest) summit. There is a marker and register there, with only three names since September 2018. 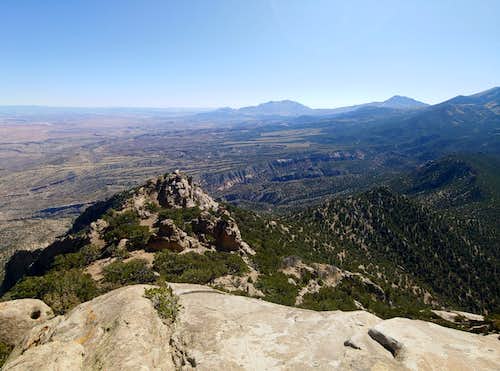 From the summit, looking further south. BLM recreational documents from the 1980s state that there is a route up from Lonesome Beaver Campground, utilizing the ridge shown here. I even found one cairn in that direction. However, the terrain looked to be no safer or better than what I had ascended, so I decided to just retrace my steps. To those wanting a loop hike, though, this should be possible.

None. Bull Mountain is on public BLM land.

Spring and Fall are best. Summer temperatures here would be brutal, and I can’t imagine attempting this hike in snow or ice.

Lonesome Beaver is a pleasant, wooded campground only a short distance south of the route described here. There are also dispersed campsites all along the road leading up from Hanksville.