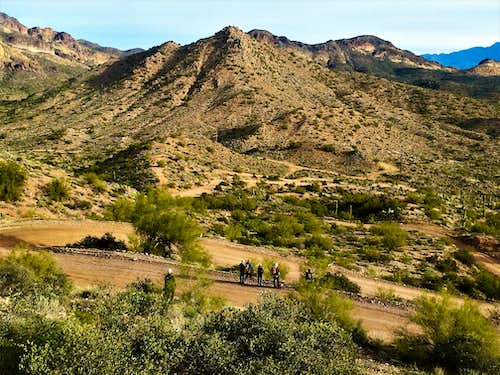 Bulldog Mountain from the south
Bulldog Mountain – Peak 2685 on topographic maps – is a prominent summit in the Bulldog Canyon Recreation Area. It isn’t as high as its neighbor to the north – Dome Mountain. However, it is reasonably accessible. Bulldog Mountain is south of Dome Mountain and the high peaks of the Goldfield Mountains. Unlike those peaks, it is not as colorful or rocky. However, if offers tremendous views without significant effort.
Some folks who attempt this mountain make the mistake of approaching from the south side and complain of the difficulty. However, there is a far easier path from the east side, with a faint use trail that fades in and out. Ultimately, this is a relatively. easy summit to reach. It can be combined easily with Peak 2630 to the south, which is the prominent mountain just north of Idaho Road in Apache Junction.
The shortest route to the summit is about 1 ½ miles, although it is easy to add mileage for a more full day of hiking.
Ideally, Bulldog Mountain is best hiked between November and March. Hike in the morning if doing so in November or March. Hiking off main trails is not advisable above 70 degrees due to rattlesnakes in the area who come out once that temperature is reached.

There are two starting points. If starting up Peak 2630, you need to head to Idaho Road. From Phoenix, take the 202 East to Brown Road. Take Brown Road for 6 miles (it turns into Lost Dutchman Road) and turn left on Idaho Road. Drive two miles to the end of the road and park.
If starting up the Bulldog Canyon Road, you also take a left on Idaho Road. However, turn right after one mile on McKellips Blvd. Drive a half mile on McKellips Blvd and turn left on Wolverine Pass Road. Continue for almost a mile, and turn right at the end of the pavement onto Tonto St. After a quarter mile, turn left on Cactus Road, which will lead to the recreation area. Park before the gate.

From the end of Idaho Road, take the trail up Peak 2630. It is only a little over half a mile to the summit. Head off the summit down to a wide dirt road. Take this dirt road until reaching a Y-Junction. Take the road on the left which continues straight to a series of ATV paths that go up and down on wavy terrain. Weave north up through these roads and continue on a road heading along the right side of Bulldog Mountain. Leave the road before it makes an abrupt turn to the right, and continue on a trail that goes along the right side of Bulldog Mountain.After about 300 yards, there is a ridge leading up to Bulldog Mountain. This is the east ridge. 200 yards further is a path to the northeast ridge. Either ridge will lead up to the summit. There is a faint path on the northeast ridge. However, the routes are obvious and not too difficult. The routes are relatively open, avoiding bushwhacking through thick brush. Just watch out for cholla cactus. It is about 2 ½ miles and about 1,150’ to cover both summits one way. From the summit, descent routes are easily viewed. The best route is to head back towards the road up Peak 2630, but take a road to the east of Peak 2630, that leads south and doesn’t require much elevation gain. Continue south on this road and over open areas until you reach a small trail that leads back to the end of Idaho Road.
From the Bulldog Canyon Road, head past the gate and continue for a little over a half a mile where you will see the same ATV paths mentioned above. Follow the same directions to the summit. This is only about 1 ½ miles to the summit, gaining less than 700’. Hiking up the final slope up the east ridge

There is no specific red tape for hikers. However, if driving up the road, follow information from the Tonto National Forest:.