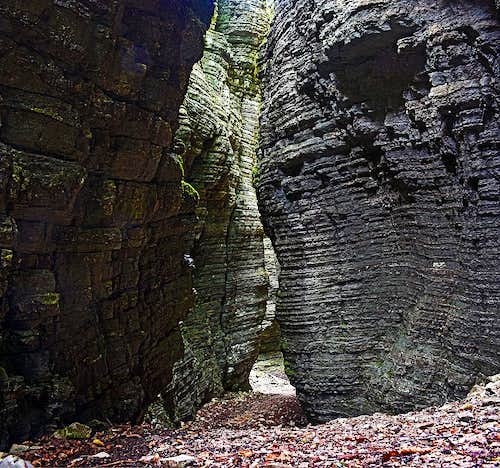 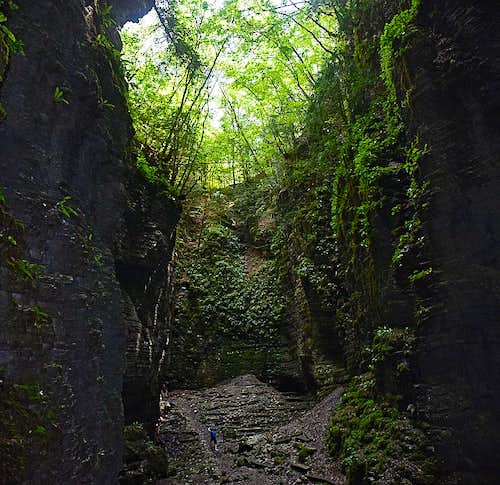 Bus del Buson amphiteater
In the valley of Torrento Ardo (creek), south in the great castle of Schiara mountains, there is a wonderful, good 200 meters long canyon, which is nowadays a major touristical attraction. Its high, completely vertical walls are very picturesque, especially the rock layers make a great impression. Even if the canyon is quickly and easily accessible (20 minutes), you will usually encounter no crowds there, so you can experience the absolute, deafening silence reigning there. But, it looks that locals want also to promote this place. So, occasionally they organise even musical events there. Can be an interesting experience, but then the silence of the place is of course gone. The best time for visit is around mid day, when at least some light comes into the canyon.

Bus del Buson is a 'relict' canyon, created by torrental waters during the last ice ages. Supposedly the whole area was lying under the glacier, which was stretching at that time down to the valley of Piave. Under the ice, torrental waters were carving the canyon through rock layers, called Biancone (deposited in seas in the lower cretacious era, some 100 million years ago). Later a landslide closed the creek path, so Ardo was forced to find its way a few tenths of meters eastwards, and it is still today carving the gorge there. So, Bus del Buson is a kind of 'fossil' canyon, 'abandoned' by its creator.

The creek is some 16 km long, along its banks interesting geology is displayed - from the pure dolomia principale in the upper parts, through the various more recent limestone rocks in the lower parts, till flysh and molasse at the exit. In the upper part, many ravines are gathering waters from the southern slopes of Schiara, then below those junctions the creek is formed. It flows southwards by a spectacular, deeply carved valley, forming ponds and smaller cascades. Some places can be reached by narrow (some also very exposed) paths, other places are known only to experts. Besides the creek itself, the two most famous places in its valley are Bus del Buson and Pont de la Mortis (also: Mortiss). The latter is a narrow groove, where the creek cut its way through picturesque layers of 'Scaglia Rossa' rocks. The place can be easily visited - good path till the bridge.

The nearby place, called Col de Buson, revealed a settlement which was inhabited from the Neolithic era, respectively from the second half of 5th millenium BC. The majority of artifacts is from the Copper Age. The settlement had a defense role, controlling the valey, but there are also signs of a cult place. In addition to home made items (some 20.000 of arrow points), artifacts were found proving trade connections of those people with people from far away - with Carpathian-Danubian area and especially with people, living in Ljubljana marsh. The more recent ceramic artifacts are from the early bronze age.

From Belluno drive northwards into the Bolzano village and further through the Gioz village into the valley of Ardo. A narrow asphalted road gets you to Case Bortot, where you can park (46.182608, 12.195153). That's also the southern trailhead for the Schiara Dolomites group - for the Rifugio VII Alpini.

Easy path T2/T1 (suitable also for children), as long as you don't leave the path. Dedicate for the whole visit 1 h 30 min. From the parking lot at Case Bortot you continue almost horizontally by a broad mule track for ten minutes. So, you arrive at a first junction, where you can descend steeply right down towards the creek bed. But if you intend a round tour visit (recommended), then don't go down, but just continue a few hundred meters, and go down on the second junction. Good, broad path brings you down just to the canyon mouth. Enter the canyon there, pass comfortably through it and exit on the other side. To return, you must now steeply ascend up - some 100 meters - to the first junction. 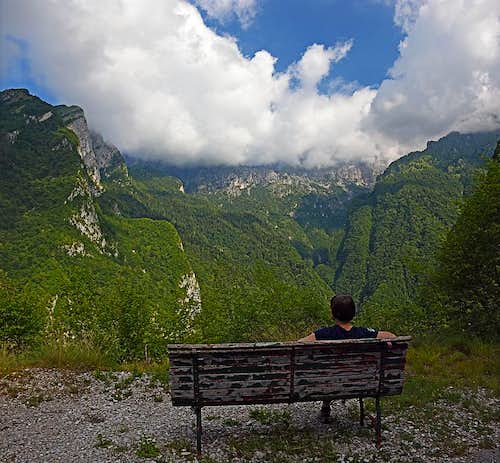 Schiara group from above the Ardo creek canyon
I don't know if this tour deserves to be recommended, but it's a nice hike, often mentioned, connecting some best places of the Ardo valley and as we did it, a short description is here. If you click on one of the two maps below, you can download also the GPS track.

Borgo di Vial
We can park at Case Bortot, or even earlier, near the small church of S. Antonio (46.175632, 12.192441). From there we take the road right, which in a few minutes brings us to the nice Borgo di Vial (picturesque hamlet). We continue through it and a good path then brings us to the famous Pont de la Mortis, ca. 520 m.

On the mountain road
On the other side good path continues steeply up. That's the most enduring part of the tour. We gain altitude and then reach the place where paths are branching. The right one (broader) goes on Col di Roanza (big detour), so we continue by the left one, which in a few minutes brings us on a forrest road. Disregard it and on the other side just continue past the old house (748 m). Over the meadow in the forrest and then by a weak path steeply up again, until we exit the forrest on the higher mountain road. This is Colturella, 857 m (the highest point), where we turn left, following the road. It leads us long across the steep slopes above Ardo creek. By a bench great views on Schiara group open. Then we enter a few hundred meters long tunnel (no lamp need, there are windows in it), after which there's soon a junction.

Pont de Mariano
We continue left down, in many turns a good path brings us to the Ardo creek. By the last inhabitant of that wild and remote place, it is called Pont de Mariano. We cross the creek and hit the main trail, going from Case Bortot to the Rifugio VII Alpini. There we turn left and follow the nice picturesque path, again climbing some 50 m, so it can cross the abysses above Ardo creek. After the most picturesque crossing we finally approach the junction, where we descend left down to the Bus del Buson, go through the canyon, exit on the other side and ascend (some 100 m) up on the main path again. In next 10 minutes we reach Case Bortot. Mostly easy paths (T2), some orientation challenges. 4 hours.

Water source
The area of Torrente Ardo is incorporated into the Parco Nazionale delle Dolomiti Bellunesi. In addition to other natural and historical/cultural values, there are nice forrests with some rare tree species, rich and also quite unique flora and interesting fauna.

It is said that old people were calling "Mortìs" the hole, formed by Ardo creek, due to the mysterious facts that there lived the 'devils', the souls of people who were guilty of crimes or who had died violently. Under the bridge the devils were playing and due to warmth of their body, the Ardo water evaporated, forming a dense fog.