La Malinche volcano between the south-central Mexican states of Tlaxcala and Puebla has seasonal streams that flow in all directions. These streams create countless narrow gullies, most of which still contain their original pine-oak woodland, as they cannot — unlike the flatland above them — serve agricultural purposes. The ones that are wide enough to walk, like Los Pilares (also known as Xalatla; from the Nahuatl Xalatlan, 'at the sandy soil'), offer beautiful and easy day hikes, as well as camping possibilities and alternative routes to the top of La Malinche. 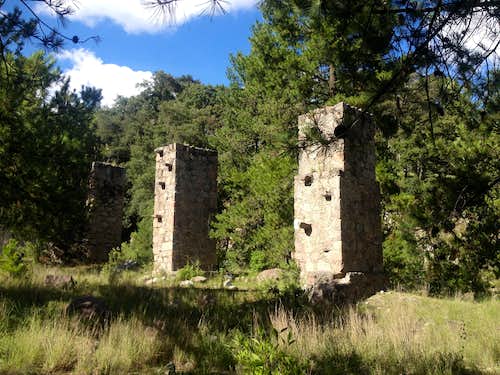 Getting There & General Recommendations

The easiest way to reach the trail head is by car. Take the federal highway 129 (Amozoc-Teziutlán-Nautla). In Acajete, turn uphill/northwest at Calle 12 Norte and continue straight ahead, keeping your right. After some 2 km there is a shield: Los Pilares to the left. Note that this doesn't mean the gully but a recreation park with the same name, so you must continue to the right. After 2 more km, the road splits. The right continues uphill, while the left takes you down the gully. You can park your vehicle there. I would advise you to leave a visible note inside the car, something like "Fuimos a explorar la cañada" stating date and time, as some locals in rural Mexico will report unknown and perceivedly abandoned vehicles to the police.
If you don't have a car, you must take an intercity bus and ask the driver to drop you off in Acajete, then continue by foot. As most Mexicans are still decades from understanding the importance of proper waste disposal, I would advise you against getting into the gully at an earlier point (i.e. at 19°06'50.6"N 97°56'52.5"W) — to save you from unpleasant, waste-ridden sights.
The best time to explore Los Pilares is during the summer months because of how green everything turns. Look at the weather forecast for Acajete, pick a day with little probability of precipitation, and arrive early. The best chances are during the canícula (dog days) from mid-July to early August, as well as mid-October through November, just after the end of the wet season.

Just walk into the gully at the trail head and continue upstream. You will most likely see no or very little water in the riverbed, as the gully discharges the rainwater from the seasonal storms very rapidly. At various points there are narrower side gullies. You can explore a little bit, but most of them are too overgrown to allow it. I would recommend to just continue straight ahead and enjoy the scenery. 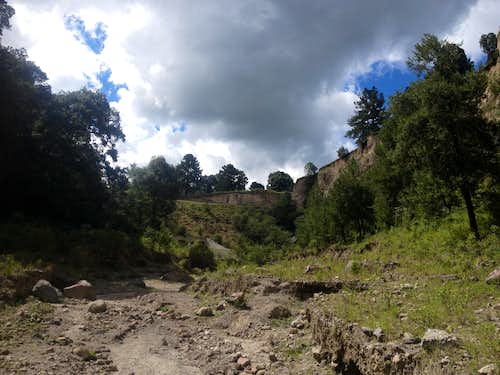 The riverbed, close to highway 140D
Near the trail head is a strange monument which gives name to the gully. It originally consisted of four stone pillars on a meander, one of which has collapsed into the riverbed. On one of the stones you can read: "These pillars were made in the year of 1889 under mayor Mr. Manuel Rosas / Commisioner of plumbing Mr. Domingo Porras".
The riverbed is sandy, but not too difficult to walk in. There are a few shortcuts with firmer ground at some points. One of the most beautiful parts comes after some 1.2 km, where you can find a nice ocote (Montezuma pine) forest with enough shade to relax while listening to the singing birds. This place is also best suited for camping. 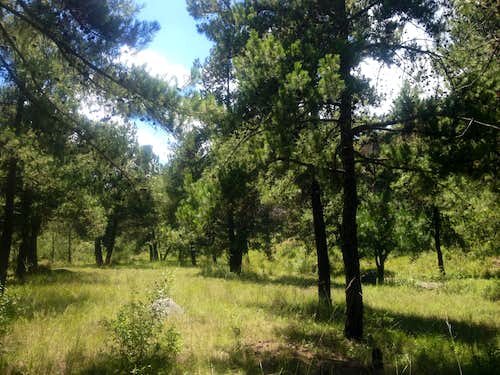 Pine forest
Federal highway 140D crosses the gully on a bridge after 2.5 km. While you may encounter an occasional shepherd on the lower parts, the part beyond the bridge is pretty much always deserted, which increases the probability of fauna sightings, mostly cottontail rabbits (Sylvilagus cunicularius).
You can return at any given point of the hike. If your goal is to climb La Malinche via Xaltonalli mountain, you should start heading west at some point in order to reach the Tepulco trail. For more information, see: Neyra Jáuregui, Jorge A. Guía de las altas montañas de México y una de Guatemala. Mexico City (2012): CONABIO. p. 219. I will update this information if I find out about it someday. 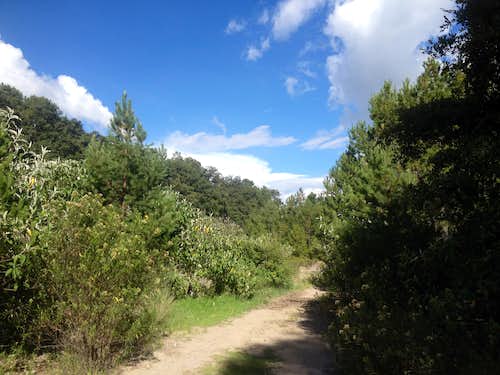 One of the shortcuts

Los Pilares on Wikiloc. This isn't a normalized, hand-drawn route, so there are quite a few squiggles when my phone's GPS lost track. Also bear in mind that for this route I started a bit before the actual trail, leaving my car on the way. The point were I returned was a random peak I saw. The next time I get there, I will go further upstream to see if the gully "ends" somewhere.