Cabeza Nevada (Snowy Head) or Mogota/Mogote del Cervunal is one of the most important mountains both of the Central Massif of Sierra de Gredos (Gredos Range) and Sistema Central (the main range in Central Spain). This huge mountain is situated between two gorges (Garganta de Gredos and Garganta del Pinar) that get down from two old glacier circus, where nowadays are situated, respectively, Laguna Grande de Gredos (Big Lagoon of Gredos) and Cinco Lagunas (Five Lagoons), a testimony that from these gorges in the north slope of Sierra de Gredos get down two large glacier tongues: the U-shaped valleys are a clear evidence of glacial erosion.

During the Quaternary Period a wide net of glaciers covered the mountains of Sierra de Gredos; this glacier period ended 11.000 years ago and supposed the melting of more than 40 huge glaciers, those only in the Central Massif. An interesting and inusual phenomenon can be observed in the north slope of Cabeza Nevada: a glacial transgression. Effectively, the glacier tongue of an old glacier (that occupied the current Garganta del Pinar) overflowed its right moraine and flood a portion of the current Prado del Cervunal (Cervunal meadow). For more details, see the "from Navalperal de Tormes and Cuerda del Cervunal" route in the next section. 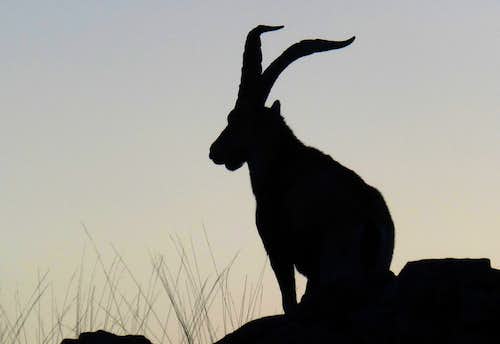 A clear day (specially in winter or soon spring) you can distinguish the whole of Sierra de Gredos: from the Eastern Massif to the Western Massif, including (obviously) the Central Massif. Some of the tops easily visible are: Escusa (1.960 m.) and Cerro del Cabezo (2.190 m.) in the Eastern Massif; La Mira (2.343 m.) and La Covacha (2.399 m.) in the far limits of Central Massif and the whole Sierra de Béjar (Western Massif) and its highest top: Canchal de la Ceja (2.429 m.). 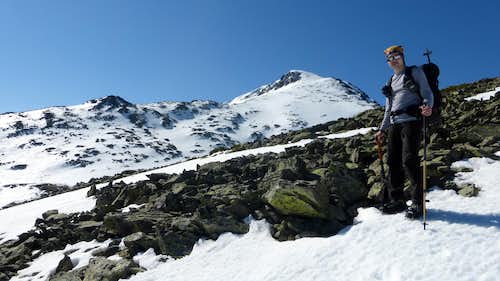 There are two normal ways (both from the north of Sierra de Gredos):

-The first one requires a long approximation from the village of Navalperal de Tormes (1.303 m.). You can spend the night in the little Cervunal refuge/hut (not guarded), recently restored. For additional information, see the route "From Navalperal de Tormes and Cuerda del Cervunal".

-The second one is preferred by a majority of people, because the starting point is Plataforma de Gredos, placed at 1.770 meters high, much higher than the previously mentioned village of Navalperal de Tormes. This route also allows to spend the night in the more comfortable Elola refuge (refugio Elola), guarded (65 people in bank beds) and with lunch service. The route crosses Garganton and goes up to Portilla del Rey (a gap) before to climb Cabeza Nevada western face.

From Madrid to Navalperal de Tormes (1.303 m.): 191 kms. (2 hours and 17 minutes according to GoogleMaps). Take highway A-6 and then AP-6 and AP-51 (toll roads) to Ávila. Then N-110 and N-502 to Venta Rasquilla, when you must turn right (AV-941) to Navalperal de Tormes. Cross this little village and take a narrow road that go down to the Tormes river. Here yoo will find a free parking and a recreational area. The last gas station is situated in Navarredonda de Gredos (19 kms from Navalperal de Tormes).
From Madrid to Hoyos del Espino and La Plataforma (1.770 m.): 177 kms. to Hoyos del Espino (2 hours and 1 minutes according to GoogleMaps) + 12 kilometers to Plataforma de Gredos. Getting to Plataforma de Gredos is easy. Follow the same route previously described to the village of Hoyos del Espino. In the center of this village take another route indicated as "Plataforma de Gredos"; 12 kilometers away this route ends in a huge parking. This is the start point to the refuge Elola and Portilla del Rey route. 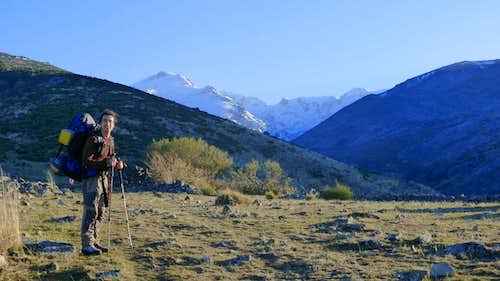 The little village of Navalperal de Tormes (1.303 m.) (see the section "Getting There"), placed on a hillside over the river Tormes, is the starting point of this route. You must to leave the car at the parking area next to a bridge over the river Tormes. There is a fountain (where it's advisable to refill the water bottles) and an information placard of Parque Regional de la Sierra de Gredos. Follow a forest trail that goes up and immediately turn left. There are several livestock cabins (goats) further on.

The forest trail bifurcates; take to the right and go down to a metallic bridge that crosses a wide stream. The forest trail continues by the other bank, skirting across an oakwood. From the beggining of this route, there are several wood stakes (white and yellow) that indicate a PR (initials of Pequeño Recorrido: short distance trail) that goes up to Cinco Lagunas (Five Lagoons). Further on you will arrive to a junction of two rivers. The first one (right) goes down from Garganta del Pinar and Cinco Lagunas; the seconde one (left) goes down from Garganta de Gredos and Laguna Grande.

You have to cross another little bridge (Puente de Roncesvalles) and you will see a bifurcation: several placards indicate the routes to Laguna Grande and Cinco Lagunas, but you don't have to take anyone of these trails: go straight on following a trail marked by stone cairns, going up the beginning of Cuerda del Cervunal (Cervunal ridge). This ridge is placed between two gorges, already mentioned: Garganta del Pinar (on the right) and Garganta de Gredos (on the left). 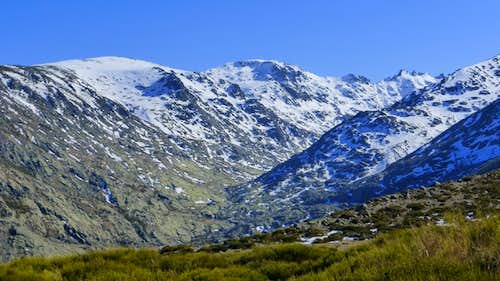 Few minutes afterwards you will arrive to a fountain, where you can refill your water bottles again. The Cervunal ridge is wide and easy to walk and the views are splendid to both gorges, every time lower to both sides. This gorges have a cross-section in "U" because they were eroded by old glacier tongues. It's easy to watch lateral moraines (specially in Garganta del Pinar). The trail is well marked and several cairns indicate the right way, that continues going up to Cerro de las Peñas (1.803 m.).

Prado del Cervunal is a vast meadow where in summer a lot of cows graze quietly. At the end of this meadow you will find refugio del Cervunal (1.814 m.) (Cervunal refuge/hut), an old shepherds hut recently restored and usually used as a mountain refuge. 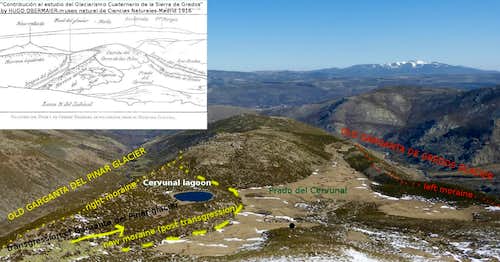 Cervunal refuge on the inside

Refuge of El Cervunal is a little hut with capacity for three or four people, sleeping on the ground (though a person can sleep on a wooden bed). There is a fireplace especially advisable to winter time (only wood of piornos can be used). It’s mandatory to put off the fire before leaving the refuge and remember that it’s forbidden to make fire outdoors. A little table and some stools complete the scarce furniture of this hut. On March 2014 it was very clean and dry and it's possible to spend the night comfortably. There is a fountain 20 metres away, downing several metres from the refuge to a little stream.

The next day it’s advisable to wake up early to avoid hot days in summer (and also to find hard snow both in spring and winter). Go straight to a hill behind the hut, covered by little piornos. It’s not difficult to cross this bushy area, because cows are cleared the undergrowth. You have to look for a small stream that goes down from the north face of Cabeza Nevada and stay to the right of it. There is a visible gap that you have to reach, between this mountain and the neighbouring Novillero (a secondary 2.247 metres high summit). Its situated on the right of the top of Cabeza Nevada (N). 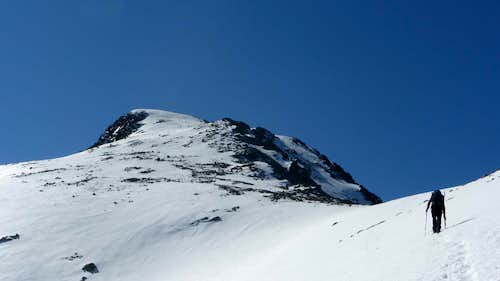 This is your first target after crossing the bushy area already mentioned. The slope is uniform (30º) but increases above the gap (35-40º). Be careful it you find ice or hard snow (in this case is mandatory to carry an ice-axe and crampons). It’s not rare to find ice, because this route climbs Cabeza Nevada by its north face. Don’t make a detour neither by Garganta del Pinar nor Garganta de Gredos slopes, because the fall is very dangerous. In summer (or whenever you ascend this mountain without snow) this is only a rocky slope without any problem to climb.

A few minutes afterwards the slope declines and you will arrive to a false summit. A few meters away (N) you will reach the true summit of Cabeza Nevada (2.427 m.), easy distinguishable by a big stone cairn. 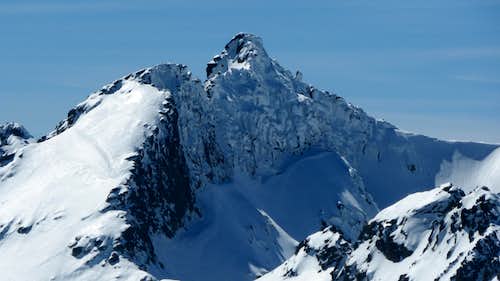 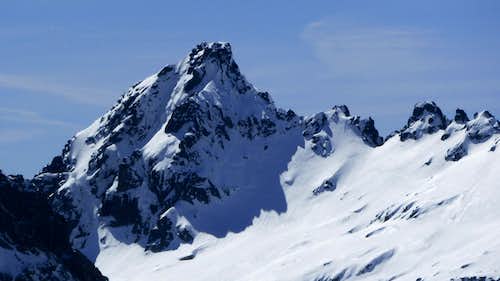 Far away to the west: La Covacha (2.399 m.) is the most important mountain distinguishable, both Sierra de Béjar and its highest top: Canchal de la Ceja (2.429 m.). 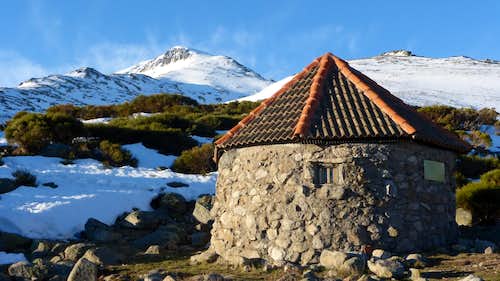 Cervunal hut (refugio/cabaña del Cervunal) and Cabeza Nevada north face in the background
No permits or fees are required to enter in this area. However, it's important to remember that it's forbidden to camp in Parque Regional de la Sierra de Gredos (Sierra de Gredos Regional Park) but to climb Cabeza Nevada there are a guarded refuge (Refugio Elola) if you decide to start your route in Plataforma de Gredos and a little hut (refugio/cabaña del Cervunal) where you can spend the night if you prefer to start from the village of Navalperal de Tormes.

For knowing better the road conditions (specially indicated in winter) you can consult the web page of DGT (Traffic General Direction). In this web page you can see a map where you can check all the traffic incidences and restrictions, webcams, etc.

Other lodgings more comfortable are rural houses. You can visit the web page Toprural (you can choose another language first: english, french, etc.) to find accommodation in the neighbouring villages. Choose in the map the province of "Ávila" and then you can write "Navalperal de Tormes" or "Hoyos del Espino" to find rural houses in this area.

To know the weather conditions: AEMET (Agencia Española de Meteorología). You can choose english or french as language. 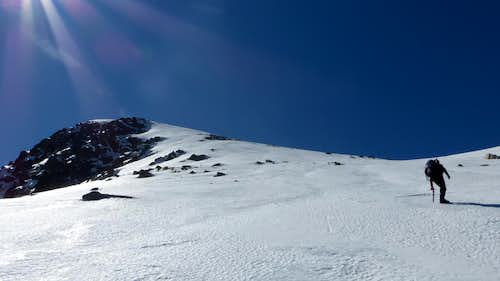 A good advise (specially in winter and autumn) is to visit the web page of Refugio Elola, where you can find information about the climb conditions in Circo de Gredos and surroundings and several photos of snow conditions.

Winter: an ice-axe and crampons are mandatory, as well as good equipment to cold days. Nightfall is about 6-7 pm. The north face of Cabeza Nevada has hard ice to late april and steep slopes of 35-40 degrees (it's by here where the route from Navalperal de Tormes reaches the top). The other faces can present soft snow on the same dates. 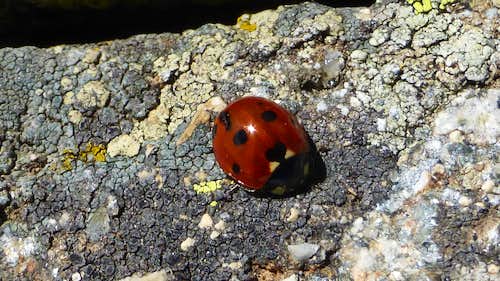 A ladybird next to Cervunal Lagoon

Spring: depending of the year, the weather conditions can be very different and the snow can last up to summer. Nightfall is about 8-10 pm.Spring

Summer: hot days are not rare. Carry a 1,5 litres water bottle (you have several fountains and sources to refill it), a good hat and suntan oil. The snow dissapears and the routes convert in unpleasant rocky slopes. Night fall is about 9-10 pm.

Autumn: the snow quality is no good at the beginning of autumn and you can find very cold days and a dangerous thin ice in the tops of Sierra de Gredos. Night fall is about 7-8 pm. 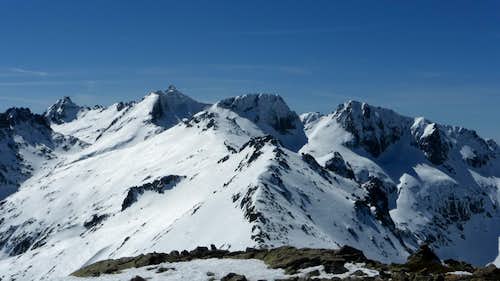 -A good description of both routes to climb Cabeza Nevada (from Navalperal de Tormes and Plataforma de Gredos) with many photos: http://pirineos3000.com/servlet/DescripcionAscension/MONTANA--Cabeza_Nevada--IDASCENSION--12527.html

-Another web page with lots of routes in Sierra de Gredos and other mountains in Spain (though the description of the route to climb Cabeza Nevada is short): http://www.mendikat.net/monte.php?numero=1377es

-An interesting web page to know more about glacial geomorphology in Sierra de Gredos, and links (several in english) to another scientific studies: https://portal.ucm.es/web/gfam/geomorfologia-gredos

A very interesting tool is to browse using Iberpix viewer (Instituto Geográfico Nacional/National Geographic Institute). All maps are free; you can print it and generate GPS files (.GPX).

You can visit the web pages of Desnivel or Tienda Verde to find several books and maps of Sierra de Gredos and another ranges in Spain.