Calling on My Guardian Angels, Part 1

After reading this trip report and learning that SGA is attainable for mortals, though not easily, I knew I had to climb this desert classic.

I haven't yet. It's a goal for this summer. My intent is to plan for a long day but be prepared to spend the night out there if necessary; I really want this peak.

But why go after SGA if you're not going to go after its higher sibling North Guardian Angel as well? Good question. And NGA is no slouch. Also considered a desert classic, it is technically harder to climb than SGA is but is easier to get to.

Some go for both on the same day. Me, I couldn't do that when opportunity called. The time didn't exist. But I had to get at least a taste.

In April 2011, my wife and I hiked from the Wildcat Trailhead to the overlook of the Northgate Peaks. From there, I went on to climb each peak while she went on to get back to the car. How I ached to add NGA that day! How she gave me a "Don't; I'm being patient enough as it is about the Northgate Peaks"!

So I behaved and exercised some painful self-restraint. Knowing I'd be back the same time the next year helped. Knowing that snow might block the road to the trailhead the next year didn't. Now picture my wicked grin upon reading about the dry winter and the warm temperatures of 2012...

Okay, that's about all the story I've really got. I went out, climbed the peak, loved it, and at the summit stared like a hopeless romantic lost in love at the South Guardian Angel so close, yet so far away. No, the Hall & Oates song wasn't playing on the wind, nor was it playing in my mind at the time, but when I think of that view now, I think of that refrain.

The rest of this trip report consists of photos of and comments about the standard route on this awesome peak.

The route page attached to the NGA page is good and does what it needs to do. Consider this a complement to it, not a challenge.

After the hike to the overlook between the Northgate Peaks-- according to NPS information, this hike is about 2.5 miles, but it has to be considerably shorter since it took me a little over 30 minutes to get there, and though I was excited for the climb, I wasn't that excited-- the approach to the base of NGA was pretty easy. Upon descending from the overlook, I found a sandy wash that led to a brushy area near the base. Use trails helped here and there, but a little easy bushwhacking was unavoidable.

The next part was the scramble to a "saddle" on the northeast ridge, a scramble generally described as Class 3/4. I seemed to choose the approximate route most others do, as evidenced by some slings I found on trees, but I did not use these slings on the descent and actually went a different way that seemed a little easier; this way was a bit to the west of the ascent line.

This is only speculation because of snow conditions that day, but there was a snow-filled line leading almost directly to the base of the "real" climbing on the NE ridge that struck me as, when snow-free, the best line up to the crest of the ridge. That line is visible in the picture below. 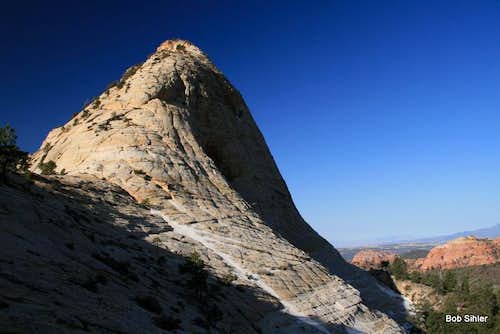 Next up was the crux of the route, a 50-60' pitch of steep and sometimes-exposed slickrock. Shedding my hiking boots and donning my rock shoes, I approached the crack rated as 5.6, decided it wasn't for me with a large pack on (I was carrying a 60m rope for rappels), and opted for the Class 4 workaround to the right, which was actually more exposed than the crack; in my estimation (based on later climbing the crack), there was only one spot along the crack route from which a fall would have a good chance of being fatal, but on the workaround, there were a few. Pictures of the crack and the workaround follow the next paragraph.

But about the 5.6 crack-- I don't know who rated it that way or why or when, and maybe it was someone whose climbing accomplishments would make me look ridiculous, but I'm not buying the rating. One accomplished climber on this site thinks it's more like 5.4, and I wonder about even that. It's definitely Class 5, but except for a spot right around the middle, it's going to feel easy to just about anyone experienced with climbing unroped on Class 4 to low 5 terrain. That one section is where the exposure does become dangerous, but in April 2012 there was a small but sturdy root in just the right place, and then some larger and sturdier roots just above it. After descending via the workaround, I dropped the pack and climbed the crack, first "cheating" by grabbing those roots. Then I went back and did it more honorably, and although it was a little harder that way, it wasn't too much harder. Anyway, I'm not encouraging recklessness, but if you're okay scrambling Class 4+ terrain, don't let the 5.6 rating of the crack make up your mind for you. At least check it out; you might find it preferable to the exposure of the workaround.

Above the crux section, there is some exposed scrambling before you reach the final (and easy) part of the summit ridge. The photos below show two sections en route (click on the pictures for more details in the captions).

Somehow, I managed to stray from the standard route and wound up here (see below left). Proceeding upward either of the two ways seen there seemed unnecessarily difficult, so I looked left and right for an alternative. I found that alternative a short distance to the right (see photo on right); it was mostly Class 3 but had some touches of exposed Class 4/5.

After that, the final stretch of the summit ridge (below) awaited, and it was a quick, easy ramble to the top, where the views were more than worth the price of the ticket. 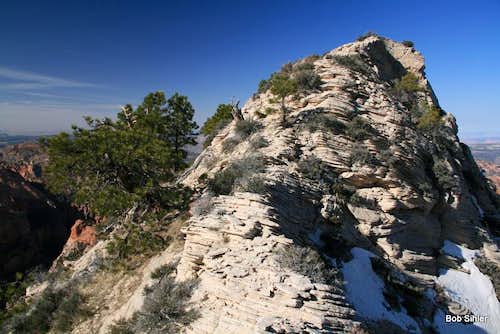 Some of those views: 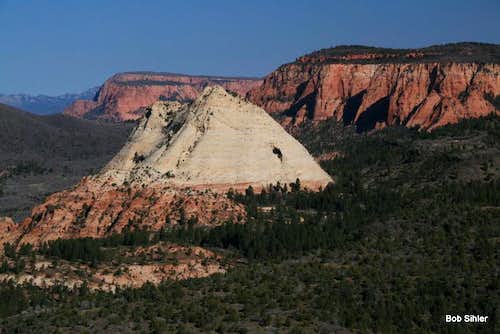 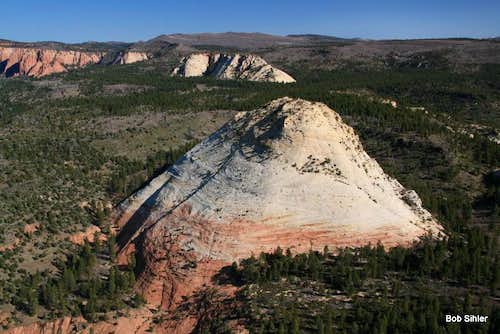 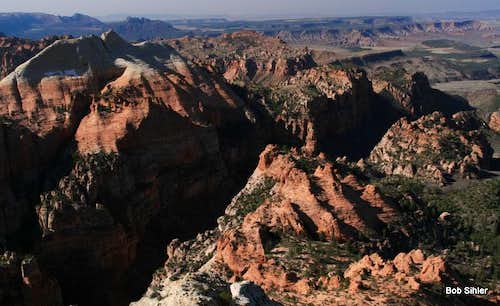 This is extremely angelic, to say the least ..

Gotta pinch myself, 'cause I believe I must be talking to an Angel.

for SGA... maybe just a window of opportunity, an early morning start, whatever. CP's/Ram's 3rd class route across the river is long; the direct route (CP, Gerry Roach, Bo & Tanya's site) is brutal and in the sun a lot of the day. SGA.

At least you can get water at the river, so you won't have to carry so much.


If you take the latter route, check this TR

Maybe I'm more heat-sensitive than you, but that exposed sandstone feels brutal when it is 90F, and the brush leaves welts on sweaty skin! Wait till the salty sweat runs into your cuts!

Re: wait for cooler weather

Thanks for the links. I already have some information from Bob Burd and was thinking of asking you as well. From what I recall, CP says in his book that the alternate route is harder to find and follow on the approach, so maybe I'll use the river approach but the other on return.

I wish I could go in May or September but don't have that option. The only other one is early April, which would be too cold if I had to cross the river.

Re: wait for cooler weather

My plan is to start an hour before dawn and start hitting the route-finding sections as the light comes.