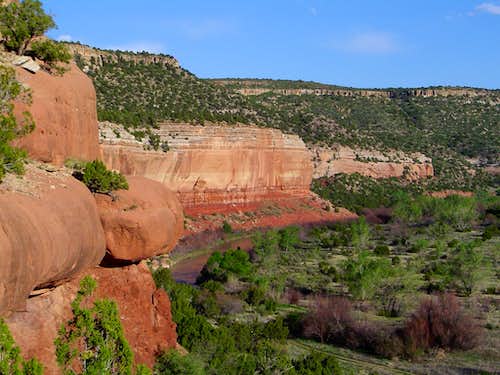 The Canadian River is the largest tributary of the Arkansas River. It flows 760 miles from southern Colorado to its confluence with the Arkansas in eastern Oklahoma. Its headwaters are in Las Animas County, Colorado, where it flows off the eastern flanks of the Sangre De Cristo Mountains. South of Springer, New Mexico, it carves a deep gorge through the Caprock, the same formation in which the Palo Duro Canyon and the Llano Estacado in Texas are located. The Canyon itself stretches for miles south to Sabinoso, New Mexico, where the cliffs of the Canadian Escarpment finally drop away and the river enters the eastern New Mexico plains.

This region is geologically akin to the Caprock or the Caprock Canyonlands of the Llano Estacado in west Texas and eastern New Mexico. The name is derived from the stone layer that lies just beneath the Llano’s sediment. The caprock is exposed dramatically on the rim, where the stone is exposed and the strata observable. The same phenomenon can be observed in the Canadian River Canyon. The interior of the canyon and the canyons of the Caprock have a strong resemblance to many regions in the Colorado Plateau. 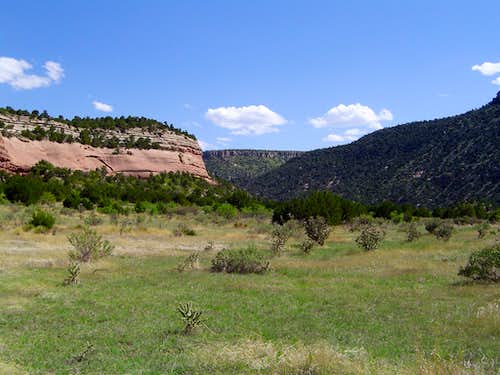 The Canyon once hosted Kiowa and Comanche tribes who were later followed by homesteaders. A resort was once established at the bottom of the canyon, which now lies in ruins. Now few people enter the canyon, mostly hunters during deer season. Nonetheless, opportunities for hiking, backpacking and bouldering abound.

The possibilities for hiking and backpacking are particularly enticing. It is possible to follow the Canadian River for almost twenty miles. The only thing that would prevent a fantastic trip through this region is the necessity of fording the river. Early in the season this can be difficult when the Canadian is swollen with snow melt. The rest of the year it is normally possible to cross. There are some rocky, shallow area where it is easier to cross. Numerous tributary canyons also provide several hiking opportunities. The vegetation in the side canyons is generally thicker, with pinon pine, juniper, and ponderosa pine providing cover. There are also numerous hiking and backpacking possibilities on the canyon rim.

Climbing may be possible on the sandstone cliffs, but this is untried so can not be confirmed here. Another interesting possibility in the canyon is rafting. It is rafted occasionally, but is generally overshadowed by the Rio Grande and Rio Chama to the west. Nonetheless, it has a lot of potential during high water.

Although the Canadian River Canyon extends nearly 100 miles across northeastern New Mexico, only two portions of it are in public lands. The southern section open to public access is found in the Sabinoso Wilderness Study Area, which as of January 2009 appears to be recieveing full wilderness protection soon. The northern area is part of the Kiowa National Grassland. It is the focus of this page, since it is more accessible. The following map covers the Kiowa portion of the Canadian River Canyon. 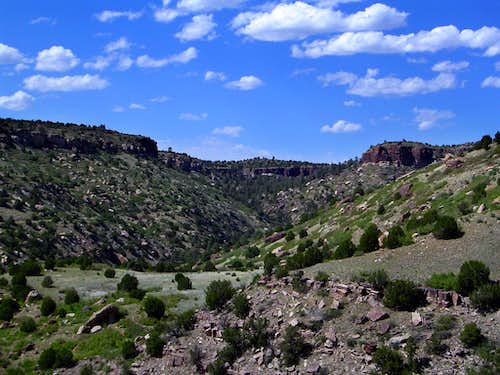 Tributary canyon through which the road to the canyon travels

From Interstate 25 at Springer, go east on Highway 56/412. Turn south on Highway 39 and proceed to the “town” of Mills, which is really a small and sporadic grouping of ranches. Turn west onto a dirt road at the signed turnoff by a ranch house. Continue to follow the signs through fields until you drop into the canyon. The road is rough and while a low clearence vehicle could probably make it, I would recommend against it.

From Interstate 40 proceed to Logan, New Mexico. Directions to Logan depend on which direction you are approaching on I-40. At Logan head north on Highway 39 to Mills. Follow the above direction from there.

Another section of the canyon is in the Sabinoso Wilderness Study Area, administered by the BLM. As of now it is surrounded by private land access is difficult. The BLM is working on land acquisitions and rights-of-way to support public entry. It is definately scenic and worth visiting, once access is improved. 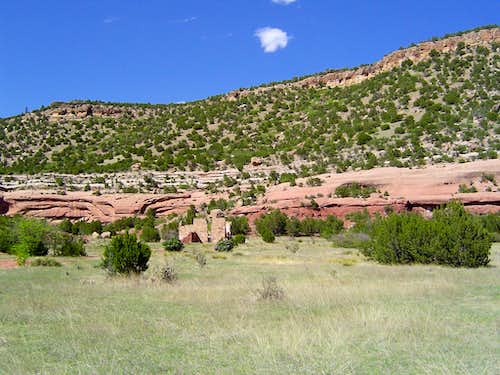 The Canadian River Canyon is administered by the Kiowa National Grassland, which is itself under the aegis of Cibola National Forest.

The Canyon is wilderness in character, although it lacks any official designation as such. Vehicles are permitted and there are some 4x4 roads at the bottom of the canyon, though some are only accessible when water levels in the river are low.

There are numerous historic sites, particularly old pioneer structures. It is unlawful to remove or disturb any artifacts. 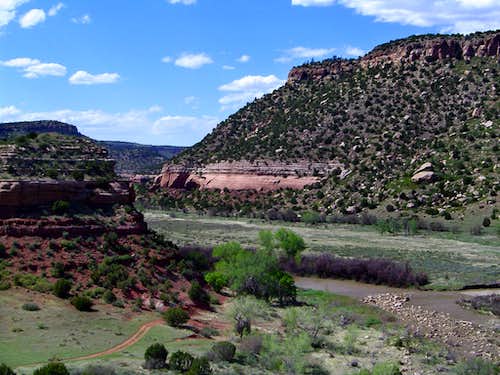 There is a Forest Service campground next to the river in the Canadian River Canyon. It is free and has seven sites. This is a good option, but there is dispersed camping anywhere in the canyon and there are some better sites a little further down the road from the campground.